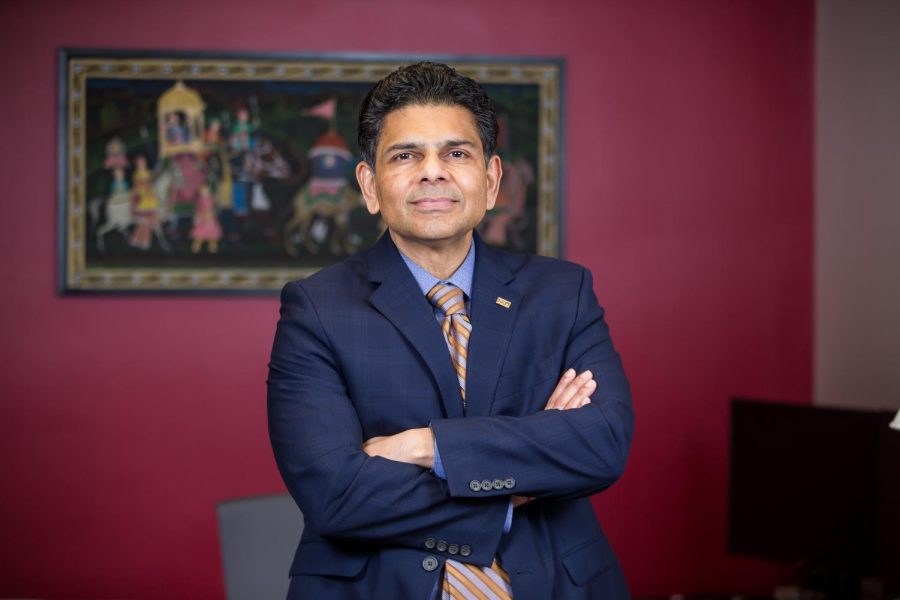 Five questions with the sixth president

He’s traveled the world, taught at universities around the country and now that he’s arrived at NKU, do you truly know Dr. Ashish Vaidya?

The Northerner: Throughout all your travels, what’s been your favorite food?

Dr. Ashish Vaiyda: “We are foodies, my family; we are food snobs … we have extremely high standards, but I’ve come to appreciate, fortunately, not just the fancy restaurants; we would occasionally go to those [restaurants], but those dives as well. The stand on the street that makes some outstanding tacos that you go at midnight, and you just have a craving for—it’s just the best thing; it hits the spot right there. The soup dumplings in China. My gosh, you can’t you can’t beat those … But at the end of the day, my mother’s cooking, which my wife really has picked up tremendously; she is amazing. I try and I can never get those right. Whether it’s the shrimp curry that is very typical from our community, or whether it’s a specific dish that we make; the comfort food at the end of the day that you crave for.”

N: If you could travel anywhere in the world, where would you travel?

AV: “There’s so many places I still haven’t been. I would think that I would want to go to a place I haven’t been. I’ve been fortunate to have gone to several places. This summer we’re going to go to Alaska, which is great. That’s a new new adventure for us, never been there. To me, as I said, travel is wonderful, if we can get a chance to do it. I don’t know where the next stop may be. I haven’t been to South America, that would be a nice place to check out. There’s just so many different options out there. And in the U.S. too. There’s still, I think, at least a few states I haven’t been to. So I’d love to I’d love to check them out as well.”

AV: “Without a doubt, the Student Union. I think just the energy, the students back and forth, the ability to be able to to say ‘hi’ to many students across has been great. It’s been a favorite spot.”

AV: “Gosh, sleeping. She is a lazy dog. She’s a spoiled, lazy dog. She’s, I think, adapting well. I think that taking her to Minnesota was quite traumatic. I don’t think she stepped out of the house for six months. She’s a lot happier here.”

N: Were you nervous for the first pitch at the Reds game?

AV: “I was, actually. I don’t think I was as nervous in the beginning because I thought it was kind of a cool honor for the president to be able to throw the first pitch … So, I thought that was kind of cool. And then somebody said to me ‘just don’t do a Mayor Mallory.’ And I was like, ‘what are you talking about?’ And then I looked up YouTube, and I was like, ‘oh, my God.’ Firstly, I said, ‘there’s no way I could ever do that.’ I am reasonably well-coordinated. You know, I played tennis and stuff. So how, how in the world? But then I saw a couple of those YouTube [videos] and I thought, ‘Oh my god, that would be the worst thing ever.’ So I practiced with [Dizzy Peyton], our assistant baseball coach. I think I did all right.”