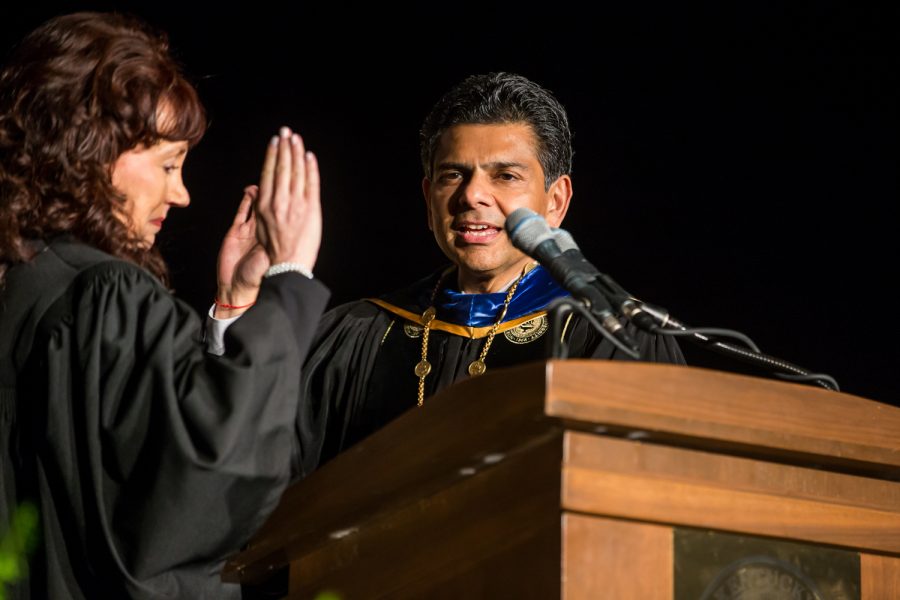 Family, friends, colleagues and students welcomed in the sixth president of Northern Kentucky University, Dr. Ashish Vaidya on Friday during his official installation.

Vaidya assumed the role as president on July 1, 2018, but was formally recognized during the installation.

Vaidya thanked everyone for coming to the event. He said his family flew in from all parts of the world, including his 81-year-old mother-in-law from India.

He said his parents named him Ashish, which means blessing in Sanskrit.

“I’m the one who’s truly blessed to have so many people in my life that love, support, encourage, mentor, challenge, inspire and yes—on occasion, even tolerate me,” he said while laughing and looking at his wife.

Kentucky Governor Matt Bevin, in a video, said that in his experience working with Vaidya, he is grateful for his willingness to always step up and be a part of the solution when they are trying to solve a problem. He said he looks forward to continue working with Vaidya for many years to come.

In a video played at the event, Senate Majority Leader Mitch McConnell said to Vaidya, “I look forward to seeing what you have in store for this great university. I’m confident you will keep the best interest of the students at the heart of your work and that will help NKU continue to thrive.”

“President Vaidya’s commitment to student success, taken collectively and respected—particularly in each student’s aspiration—demonstrates that human touch that he brings in support of those who seek to create a better life for themselves and for their families,” Rush said.

Vaidya’s integrity and intelligence manifested in a vigorous passion for the mind—tied with a vision for this region’s future needs—established him as the right person to lead NKU, Rush said.

“Today we especially feel the presence and impact of each of the presidents who preceded me,” Vaidya said. “I embarked on this journey knowing fully well that your contributions have made the foundation for future success.”

Vaidya said NKU will be nationally recognized for being a student-ready regionally engaged university that empowers diverse learners to climb the ladder of economic and social mobility, Vaidya said.

Vaidya said that educators must shift their focus from making students ready and their deficits to how they can create an educational environment. These environments need to meet students where they are, and eliminate barriers that hinder their success.

“If we believe in Dr. King’s dream, then we must also believe in equitable access to quality higher education for all students, regardless of where they are from, how they got here, who they love, what gender they identify with, how much money they have in their bank accounts or what god they pray to,” Vaidya said.

Vaidya was sworn into office by Kentucky Supreme Court Justice Michelle Keller, after Lee Scheben and Andrá Ward, chair and vice chair of Board of Regents, respectively, presented him the president’s medallion.

“I’m so proud to join you on this journey,” Vaidya said. “Thank you for the opportunity to serve as your president.”