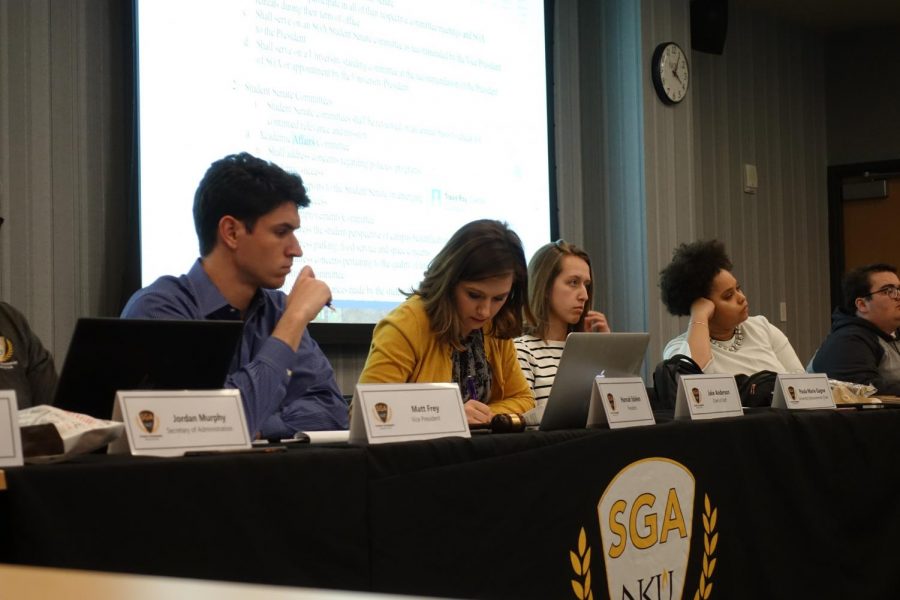 The Executive Cabinet follows along as Chief Justice Travis Roy presents his proposed amendments to the SGA constitution.

What you missed at SGA Mar. 25

Chick-fil-A out, Panda Express in

Director of NKU Business Operations and Auxiliary Services, Andy Meeks, started off this week’s meeting by sharing a report on what he referred to as the “Chick-fil-A dilemma.”

“We would not be interested in having Chick-fil-A on campus,” said Meeks.

According to Meeks, a selection committee unanimously voted against Chick-fil-A as a restaurant to propose in the negotiation with Chartwells—the next option in line being Panda Express.

“Databases provide a vital tool for student, faculty and staff research alike,” said Lopez. “A library should not be forced to reduce the number of academic resources for its students due to underfunding.”

The resolution promises to ensure that students have access to tools necessary to excel academically, and to conduct research, by allocating money to meet the continuing cost of items required by the library.

After going through corrections and amendments, the resolution was called to a vote where it passed unanimously.

SGA begins the process of amending their constitution

Chief Justice Travis Roy followed Lopez’s resolution reading with a run through of his proposed amendments to the SGA constitution.

The highlighted amendment focused on GPA requirements for SGA senators and justices to be increased from 2.0 to 2.25 and the requirement for the Executive Cabinet to be a 2.5.

“If we made [the GPA requirement] any higher, many people here wouldn’t qualify,” said President Hannah Edelen.

According to Roy, students need to be focused on academics rather than student organizations.