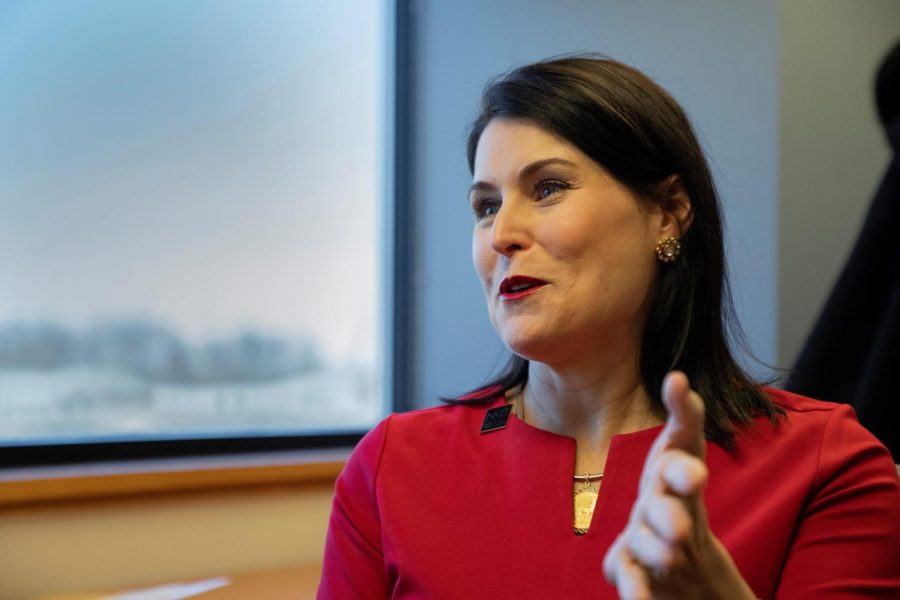 Johnna Kleymeyer began using her communication degree as vice president of communications and foundation for Citi Corporation in Florence. But, she had her eyes set on becoming site president.

He showed her a profit and loss statement and asked if she could read it, Kleymeyer, interim dean of the Haile/US Bank College of Business recalled. She said, except for the words profit and loss, she couldn’t.

“That made me realize that I needed to go back and get business acumen if I was ever going to be taken serious for a role in the senior most leadership,” Kleymeyer said.

She pursued her master’s in business, graduating from Thomas More University in 2007.

Kleymeyer emphasized the importance of getting credentialed, saying that it helps open doors that then allow for opportunities to prove oneself.

“My career has not been a ladder; it’s been lattice work … some things may have been lateral moves, but every one of them has taught me new skills that were my ultimate goal, to lead my own organization, and that’s what happened with REDI Cincinnati,” Kleymeyer said.

She said it used to be a department of the Greater Cincinnati Chamber of Commerce, but that a desire to focus solely on bringing organizations to the area and the expansion of current organizations is what led to REDI.

“The way I found to break down barriers is to be the best … people tend to not notice you’re a woman and they invite you to the table because you deserve to be there when you do your job and you do it well,” Kleymeyer said.

Judge Karen Thomas speaks from experience, as the first district court judge and the first female judge in Campbell County.

“Everybody has their own perspective, but women coming up in the ranks through the business have different barriers, have different challenges … I think women bring their perspective to the students and to the college, whatever college they’re in,” Thomas said.

Thomas said Kleymeyer will bring a unique perspective to her students for being a woman in the business field.

Thomas is a double alumnus graduating from NKU in 1982 and Chase in 1985, and became a judge in 1996. She first became a litigator, then worked for the circuit court before becoming a judge. She teaches several courses, one of which is Business Law.

She also mentioned how Chase College of Law will have their first female dean.

“I think she’ll bring that female perspective with her,” Thomas said about both Dean Daar and Interim Dean Kleymeyer.

Kleymeyer also said that women are the number one fastest-growing group that are starting businesses. She said that this is important to keep in mind when knowing one’s customer, who is leading tomorrow’s businesses and what “business is asking for.”

“I think it is so important that NKU continues to promote women into high leadership positions and that we serve as role models so that today’s women, whether in the business school, or outside of, can see themselves in what we are,” Kleymeyer said.

She said that she hopes that women seeing other women in leadership positions will make the decision to be in business less intimidating.

Kleymeyer has only been interim dean since January, but she has hopes, changes and visions for the College of Business.

“I hope to bring to the business college awareness,” Kleymeyer said.

She said that the College of Business has “amazing” programs, faculty members doing “cutting-edge” research and students that are working with companies and she said this is the “best kept secret” that she wants to share.

Marketing senior Adam Clements said that he has had a “consistently good” experience attending the College of Business.

Junior mechanical and manufacturing engineer major Vince Sprague said one area he would like to see growth in is funding for equipment, mentioning it seems difficult to get grants.

“We all have opinions, but I’m trying to use data to back that up, so that if I’m getting a consensus or I’m hearing more often that we need to do one thing over the other that’s where I want us to focus our efforts,” Kleymeyer said.

Kleymeyer said she has a personal vision of removing barriers to the faculty and staff so they can “ensure student success.” Her vision for the college is to be an integral part of NKU’s future growth and to be seen as a leader in “driving innovation, change, management, student success and student experience.”

She also wants to break down the barriers and silos—a mindset that discourages communication within a company—that naturally occur between the different colleges on campus to allow for partnerships to “work smarter, not harder.”

“This is a place that anyone can be a someone, you can make a difference, is what I mean … this is the [right] size region, that if you have an idea and you’re willing to work hard, people will give you a chance, and that’s my kind of community,” Kleymeyer said.