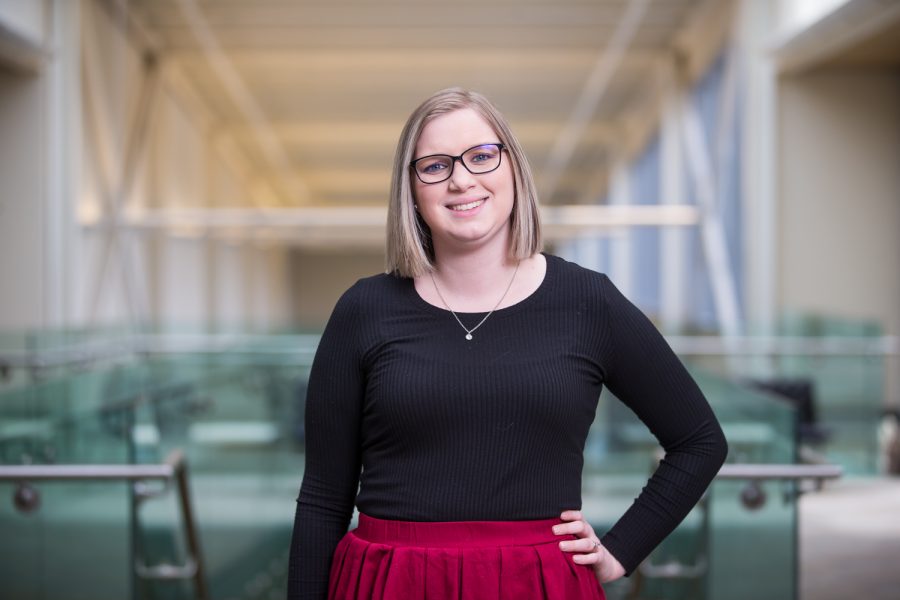 Graduate student Taylor Zumwalt began “Highlights for Hope,” a program designed to train salon professionals on how to identify the warning signs of domestic abuse, with the hopes of being able to spread awareness about the growing issue.

While the program teaches intervention, she states her main priority is to simply make people aware of how to help, and if a few lives are saved in the process—that makes all the difference.

Getting the program off the ground was a long process, according to Zumwalt. She originally started her internship with the Norse Violence Prevention Center as a criminal psychology major, but had a “crisis of self,” and re-evaluated what she wanted to do.

Leading her to go to graduate school to study social work.

“One of my mentors asked me if I’d ever thought of social work,” Zumwalt said. “My roommate was a social work major, and we had very similar goals: we wanted to work with women—victims of violence, sexual assault. I sat down and researched it and realized this is where I want to be; this is what I want to do. It covered so many of my goals.”

Zumwalt began working on the program over the summer, as she knew it would take much more than her strict 300 hour curriculum to have everything ready by December.

Zumwalt reached out to Chicago Says No More, the nonprofit group that worked to get the law passed in Illinois to train salon professionals how to recognize domestic violence.

“They got back to me and were so helpful,” she said. “They gave me advice and ideas on how to move forward, and helped me get the process started.”

The first salon Zumwalt worked with was Michael’s School of Hair Design in Florence.

“I thought, if we could affect this group of 30 students, how many of those 30 students will help 30 different salons,” Zumwalt said.

Laura Dektas, interim director of the Norse Violence Prevention Center, and Dr. Caroline Macke, the program director for the master’s in social work program, were integral to the process of setting the program up, according to Zumwalt.

“Their encouragement through that time was just more than I could ever ask for,” Zumwalt said.

She said the perspective that the two of them brought to the project helped Zumwalt understand how some words or phrases, that may appear harmless, could often be triggering for many victims.

“My ultimate goal—the dream—would be that actual victims get the help they need because their stylist knew how to help. On a broader scale, I want people to be aware,” Zumwalt said.

There’s a lot of stigma attached to discussing domestic violence, and Zumwalt said that problems cannot be solved if they are not talked about.

Currently, Zumwalt has trained 50 stylists. The idea that there are 50 people who have a better understanding of how to spot domestic abuse is “what she wants to see.”

Upon discussing the program with students on campus, many were interested in learning how to have these conversations themselves. One student, Ally Davis, sophomore musical theater major, said it’s important for adults to recognize potential situations and intervene.

“As kids, we have teachers who are trained to look out for us, and who we can talk to if we need help,” Davis said. “For many adults, we don’t have somebody like that in our lives.”

This project is very close to Zumwalt’s heart, and she said it can be scary to give something you worked hard on to someone else, but she would be willing to expand the program to help others become more aware and comfortable when discussing domestic violence.

“At the end of the day, it’s not about me, it’s about the project. If there are others who are interested in learning more about how to identify these warning signs, and have this conversation, I would be so happy to do that,” Zumwalt said.