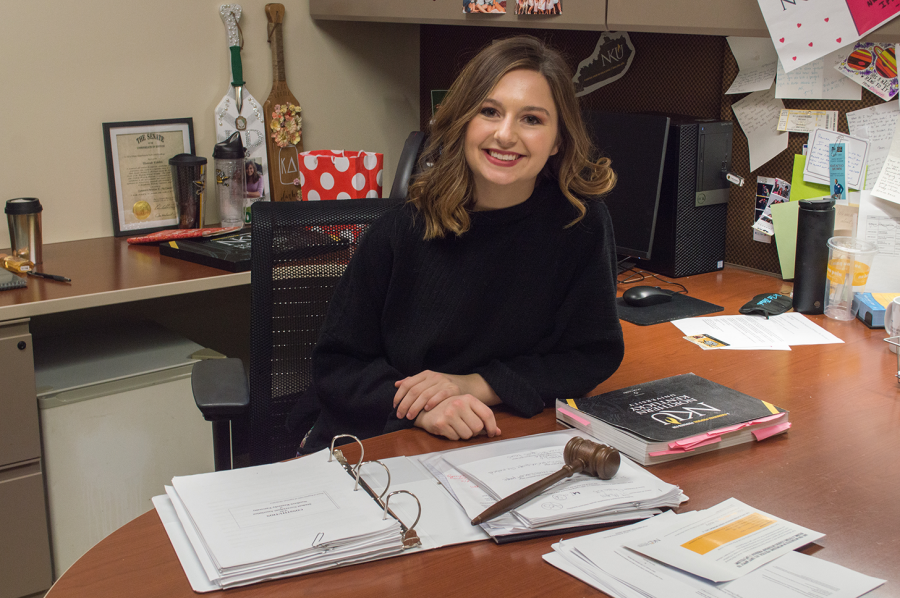 SGA President Hannah Edelen grew up in what she describes as a challenging home. With many things stacked against her—poverty, abuse and apathy—she saw the curveballs life had thrown her way and didn’t know if she could overcome them.

Edelen was raised in Springfield, Kentucky, inside Washington County. She would eventually attend Washington County High School, where she met the person she credits for her success. Her family and consumer science teacher, Sarah Raikes, acted as Edelen’s mentor and role model through high school, something she is very thankful for to this day.

“She completely changed my world,” Edelen said. “She took me from being someone who didn’t believe in themselves, who had little knowledge of what college looked like. I couldn’t conceptualize college or what that experience would potentially look like because I wasn’t sure if it was even possible for me.”

During her junior year of high school, Edelen got a 21 on her ACT, something she was embarrassed about back then—the score loomed over her, and she worried it would define her. Unable to afford college outright, she sought out other solutions.

“I applied to the Governor’s Scholar Program and my counselors told me, ‘You are not going to get accepted because of your ACT,’” Edelen said. “I was heavily involved in my community. I did a ton of leadership jobs in high school, hours and hours of service and I got accepted.”

The Governor’s Scholar Program opened many doors for Edelen and was just the push she needed to break out of Washington County. After retaking the ACT and getting a better score, she was in a much better place than she ever thought she would be.

Edelen considered Murray State initially, but she didn’t want to move from one rural area to another. She wanted a change of scenery, where there were more people than cows. The thought of moving to NKU and nearby Cincinnati excited her. When the opportunity presented itself, she applied and was accepted.

“I was the first to go to NKU in like 18 years; no one from my high school has gone in almost two decades, so this is a completely new experience that no one had any sort of opinion on,” Edelen said.

The transition from high school to college wasn’t without its challenges, either. Edelen had a hard time opening up to others for many reasons.

“In high school, I think there was a maturity level there that wasn’t developed yet. I also had an anger inside of me because of the things that were going on in my home life—I often isolated myself from other people because I felt like they couldn’t understand,” Edelen said.

Edelen opened up when she became a member of Kappa Delta sorority and found a group of girls that loved her for her. She didn’t have to explain her story to them; they simply embraced her and empowered her.

Fiona Waters, vice president of public relations for Kappa Delta, was initially intimidated by Edelen. It wasn’t her attitude, as Waters said Edelen is a compassionate, loving and inspirational figure. Edelen’s passion for serving and helping others and her drive and determination wasn’t something Waters was accustomed to from a student. Soon, she replaced that intimidation with respect.

“She’s so busy. She has every excuse not to meet with people, but she still makes time for her friends and family,” Waters said.

When she was a sisterhood enrichment team leader, Edelen took many of her sisters under her wing, including Waters. Initially, Waters thought Edelen was much older than she was. The maturity level that wasn’t there in highschool had come a long way in only a few short years.

SGA Vice President Matt Frey echoed Waters’ respect for Edelen. Frey didn’t know Edelen on a personal level, but through mutual acquaintances and shared interest; he was aware of her deeds around campus.

“I didn’t know anything about the quality of her work, or the breadth of it beyond the fact that she was involved with a lot,” Frey said.

That soon changed. During the winter break of 2017, Frey met with Edelen to help her with a fashion blog she had talked with him about earlier in the semester. Frey had recently lost the election for president of Alpha Tau Omega fraternity and was moving on to his next big project. With no student government experience under his belt, he wanted a running mate who could compensate for what he lacked.

“That was actually my question to her. I asked, ‘Can I be your vice president?’” Frey said.

Edelen wanted to make sure that Frey understood the importance of his question and that he knew what he was getting into—Frey decided to read the SGA Constitution and liked what he read. After that, they were on the move, working hard to hear the stories of those they wanted to represent.

“You really become perceptive and empathetic when you hear as many stories as she’s had to hear… With all that perspective that she’s developed, I think she’s able to have such an incredible take on a lot of things and a very mature take for just a junior in college,” Frey said.

Edelen credits the obstacles she faced at home for pushing her to do more outside of those four walls. She believes her parents didn’t see the big picture behind why she wanted to work so hard at these things, that they could only see the cost and not the benefit.

“I did community service and I participated in leadership opportunities because it was an escape from the reality that I dealt with at home,” Edelen said. “And that reality was a lot of abuse, and a lot of anger and a lot of hate, infidelity and so many other things that children shouldn’t have to deal with—and so I worked really hard in hopes of getting out of that.”

Perspective has shaped Edelen’s life in many different ways. Not being able to see past her hometown and rocky home life put her in a place where she thought she’d never escape. Once she got a higher vantage point, she was able to clearly see her way out—opportunities were within her reach and she just needed to choose to see them.

When Edelen and Frey ran for office, they made a commitment to hear from the students they represent—story after story, the student body of NKU has helped shape her mission as president as well as her self image.

“I think my socioeconomic status completely changed the way I looked at the world … but because of the situation that I had at home, not only financially but emotionally, physically, I had to develop a different prescription for what would help me succeed.”

At first, Edelen saw her background as baggage, as something to be embarrassed about. She was embarrassed about her ACT score, her parents not going to college and her home life and she believed those things defined her—like they somehow took away from her.

Edelen has strived to be the type of person she saw in others, someone who helps those who need it. Now, because of that, she has a good relationship with her father and is working toward bettering the one with her mother. She opened up to her sorority and now has a group of friends whom she loves. Most importantly, she sees value in herself and can’t wait to continue discovering what life has to offer.