Dining for your lifestyle: diets on campus 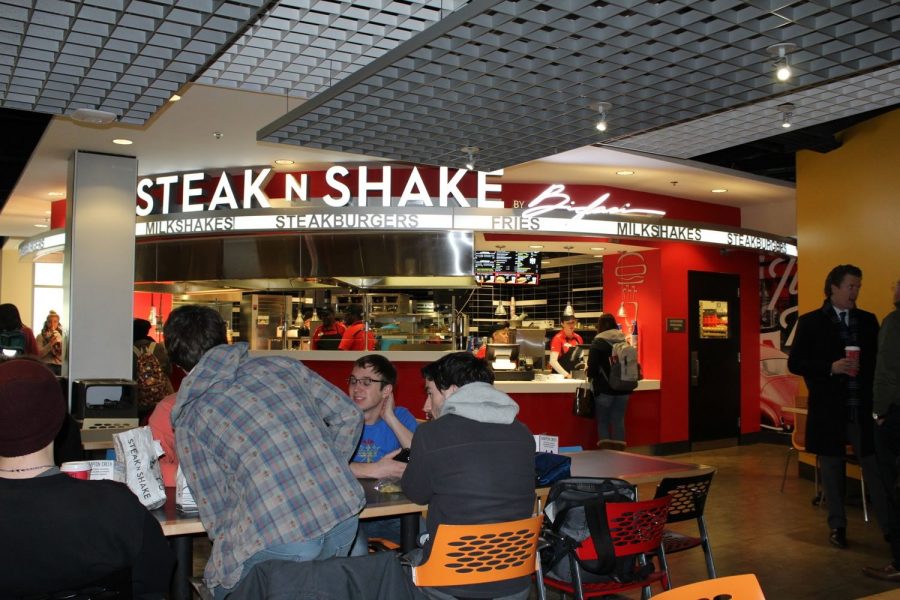 Busy schedules can make eating healthy in college a struggle.

NKU’s campus dining generally consists of burgers, fries, chicken sandwiches, crisp salads, pizza and fresh baked desserts. Fast food options are no strangers to college campuses; they may even be considered an essential part of the college experience.

“It’s easier and cheaper to make [fast food], unfortunately. That’s usually the way to go; it’s not right, but that is the way it goes,” said senior health science major Trevor Kraft.

Along with the varied selection of unhealthy fast food comes a small selection of healthier options for those looking to be conscious of their diet or adhering to a vegetarian or vegan lifestyle.

“There are some healthy options there, they’re just not as well known,” Kraft said.

NKU’s food vendor Chartwells comes with a prepackaged plan of food options. According to Kim Baker, however, NKU’s contract with Chartwells is coming to an end.

Baker, director of University Wellness, said students who pay for a meal plan have the most power when it comes to the food vendors that are brought to campus.

According to Baker, if getting healthier food into the university is important to students and the administration doesn’t know that, they will assume it is not what students want.

With the social change of healthy and organic eating—as seen by its trending on social media and presence in celebrity lifestyles—vegan and vegetarian menus are becoming more prominent on campuses. According to People for the Ethical Treatment of Animals, 1,500 four-year colleges and universities in America show a high demand to serve vegan menus.

Further, vegetarians and vegans may encounter food that does not include animal products but may still be high in fat or sugar, such as french fries. In order to avoid foods high in fat or sugar, look for foods that have recognizable ingredients and read nutrition labels. Often, junk foods have healthy replacements that taste similar, as well.

In the past, NKU had services where student wellness was coupled with faculty and staff wellness to integrate healthy eating into the NKU community.

“Student wellness does not have a dietitian; that has been something that’s been asked for,” Baker said.

According to Baker, she recently became an office of one because of budget cuts.

“I used to have two dieticians. They are no longer here. When they were here, we took a bigger role as far as food choices that were offered here on campus,” Baker said.

NKU has a population of over 14,000 enrolled students, however, according to students like senior Seth Stone, their dining menu does not adequately cater to their ever-changing student community.

“It should be up to campus to fit the needs of all their students. The only two places for healthy eating are Outtakes or Fresh Factor but everyone else has everything,” Stone, a health sciences major, said. “I just don’t think that’s fitting the entire student population.”

“There aren’t many options compared to U of L and UC. I would like to see more healthy options at our school,” Kraft said.

Some might say students are married to their meal plan; when college life gets busy, it’s only a short walk to the Student Union to grab something on the go.

“One of the big things is, we are all really busy and pressed for time so if we do not plan, we are going to go to the fastest and the cheapest. Budget is a big issue, as well,” Baker said.

Instead of mindlessly grabbing something because it tastes good, Baker believes eating healthy comes down to education and time management. Healthy food options can often taste just as good.

Often, with a busy schedule of exams, studying, work and a social life, eating gets pushed to the bottom of a student’s list of priorities. According to Baker, college is a good time to learn and start caring about healthy eating.

NKU has asked and continues to ask for healthier options. According to Baker, money and what the vendors sell plays into what we receive on campus. In order to change the dining options, students must become the “squeaky wheel” by using the voice of SGA to tell the people in charge of food services that this is something they want.

Ultimately, however, NKU is at the mercy of the state. With budget cuts, Kentucky took away the staffing and the much-needed service of student wellness for a healthy lifestyle.

“It is extremely hard to decide where to allocate funds and cut back for an entire university,” Baker said. “For the last several years, money had to go to the core university services.”

With a few minor adjustments that would include more vegetarian/vegan options, campus dining could encourage healthier eating choices for students whose meal plans are a cornerstone of their college experience.