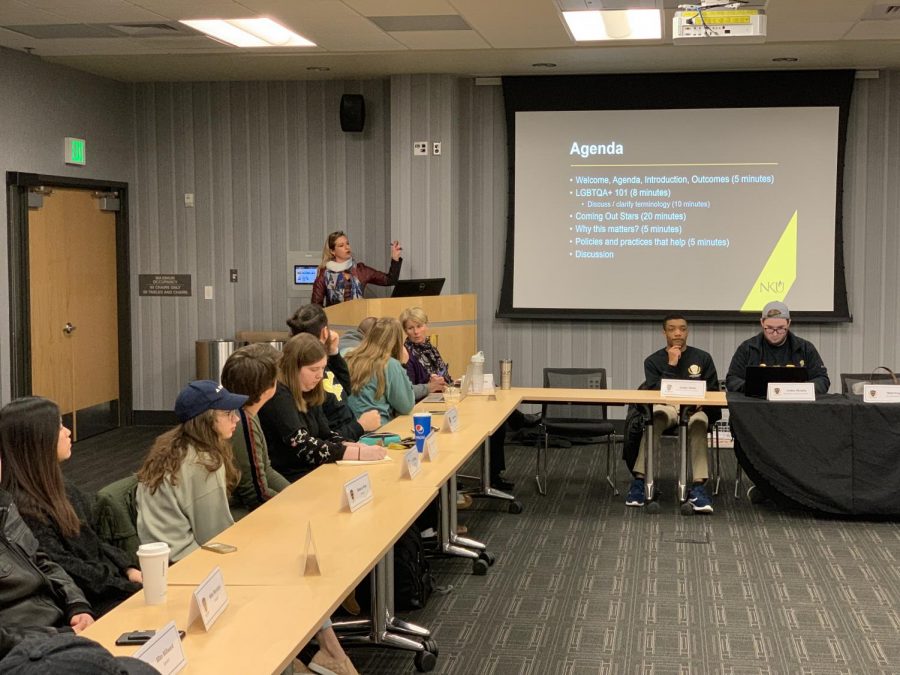 Director of LGBTQ Programs and Services, Bonnie Meyer, explains the outline of her presentation to SGA.

What you missed at SGA Feb. 25

In Monday’s SGA meeting, Director of NKU’s LGBTQ Programs and Services Bonnie Meyer gave a presentation aimed at better preparing students for interaction with people who identify as part of the LGBTQ+ community.

The presentation began with the appropriate ways to refer to others’ identities—respecting the importance of someone’s chosen pronouns as well as their gender identity, sexual orientation, biological sex and gender expression.

In an attempt to capture demographic data for the LGBTQ+ students, NKU added questions to the admissions application inquiring whether they identify as a member of the LGBTQ+ community.

“What we know is that many students don’t come out until they actually get here. We draw a lot of students from the southern, more rural parts of Kentucky,” Meyer said. “Students come here and are able to thrive because we have an inclusive environment.”

According to Meyer, NKU, University of Kentucky and University of Louisville, frequently get together to discuss inclusiveness—15 to 20 percent of our shared student body identify as either a member of the LGBTQ+ community or an ally to it.

Kentucky does not have any legal protections for people who identify as LGBTQ+. Cities like Covington and Mayesville, Kentucky have enacted Fairness Ordinances prohibiting LGBTQ+ discrimination in employment, housing and public accommodations.

“Smokers are protected in Kentucky but sexual orientation and gender identity are not,” Meyer said.

Senator Jontay Brown asked the university to improve the cultural understanding of those who work in Health, Counseling and Student Wellness.

“We do have an excellent counseling service here at NKU, and I’m not trying to speak on them in a negative way but some are culturally not competent,” Brown said. “[Health, Counseling and Student Wellness] could work with the Center for Student Inclusiveness and have cultural competence classes or training for different minority groups.”

Of the nine staff currently working for HCSW, all of them are white and only one is male. Brown believes this makes it more difficult for those staff members to relate to the different backgrounds and cultures that come with having a diverse student body, especially international students.

“An English major reached out to me about this and their resources were cut in half. This not only affects students, it affects professors, as well,” Lopez said. “The petition that was sent to me in September had not only students on it but faculty as well.”

Senator Allan Millward presented his resolution asking the university to consider adding a Japanese major in addition to the minor NKU already offers. UK, University of Cincinnati and Murray State all currently offer a Japanese major to their students, though Murray is allegedly dropping theirs.

According to Millward, an informal poll conducted by the professors overseeing the Japanese minor concluded that 78 percent of the students in the minor program would be interested in it becoming a major.