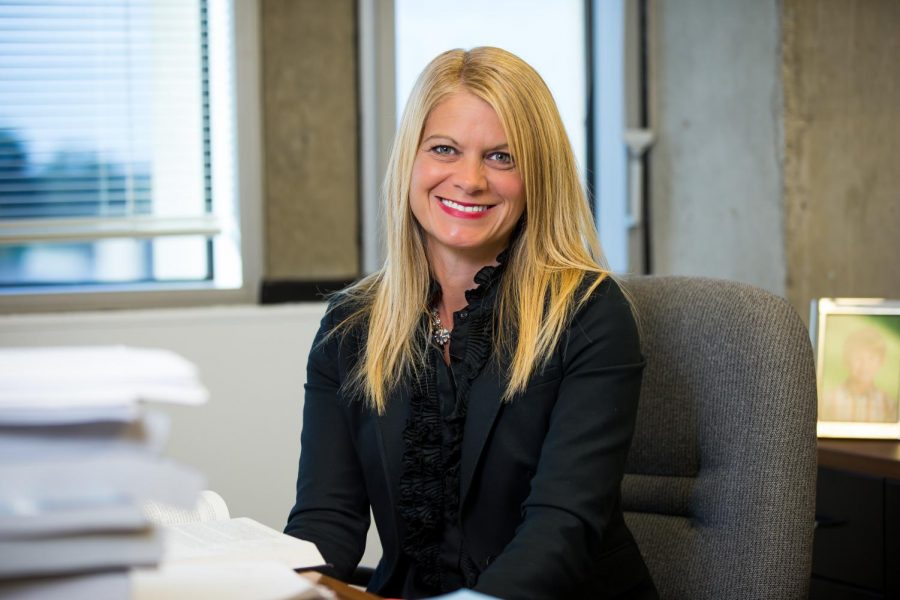 Jennifer Kinsley, attorney and Chase Law associate director of professional development, works for justice for those who belong to traditionally marginalized groups.

Chase Law professor Jennifer Kinsley does not back down from a challenge. Known for representing those who are marginalized, unliked or unseen, this rebel lawyer stands with those who need her help most.

Kinsley has been practicing law for 19 years, but it wasn’t her original plan. Kinsley initially wanted to become a high school English teacher, but did not feel like the timing was right for her at the time she graduated from the University of Florida at age 20.

Kinsley is still passionate about education. Kinsley never sets out to teach her students strictly content from a textbook, but rather the ability to believe in themselves.

“I want to give my students the confidence to know who they are, to know why they came here and to know where they’re going,” she said.

Prior to becoming a professor at Chase, Kinsley practiced law in Cincinnati.

“This is my seventh year teaching at Chase; before I came here I practiced constitutional law and criminal defense out of my office in Cincinnati but in a nationwide capacity, so I had cases and clients all over the place,” Kinsley said.

‘I’m never going to give up’

In 2014, Alexis Martin, a victim of sex trafficking, was tried as an adult and sentenced to 21 years to life in prison for her role in the murder of her pimp.

In May 2018, Kinsley received media attention for her work on Martin’s case. Kinsley pursued a post-conviction appeal stating the court should have taken into account Ohio’s Safe Harbor law which according to court documents operates on the “premise that children charged with crimes related to their trafficking are victims and should be given support services rather than face criminalization by the state.”

I like working with people who feel marginalized and who just really need to know someone stands with them and they count too, but I have seen the positive influence that I can make in a person’s life just by saying I will stand by you. ”

“A lot of legwork wasn’t done in the beginning. Lawyers are human beings and we make mistakes, there are things that we don’t know” Kinsley said.

Ultimately, the Supreme Court upheld Martin’s conviction, but Kinsley isn’t giving up yet.

“I’m never going to give up for her. She’s not a person who needs to be in prison,” she said.

Kinsley sees Martin not as a criminal, but a kind and smart girl. She hopes the world will see this side of Martin someday too.

“She’s just a really sweet wonderful amazing human being who has so much resilience and so much intelligence and such a bright light inside her. I hope that someday she gets to show that to the world because the world will be impressed with her,” Kinsley said.

In another case, Cyntoia Brown, a human trafficking survivor, was sentenced to life in prison for killing the man who bought her for sex at 16. On Jan. 7, Brown was granted clemency by Tennessee Governor Bill Haslam after 15 years in prison. If Brown’s case is successfully appealed, it could have bearing on Kinsley’s work in the Martin case.

The work of a lawyer is full of ups and downs; wins and losses. Kinsley recalls a case with an uncertain outcome.

“I had worked on a case in the U.S. Supreme Court…I had been practicing law for about a year. We also had just concluded a two-week long jury trial for a client that was very high profile case, there was all kinds of media attention,” Kinsley said.

Kinsley’s client had been heavily criticized in the media, much of the public had already determined he was guilty. Kinsley got to know her client as a human being.

“He’s just such a sweet soul. He created a piece of art for me that still hangs in my house,” she said.

Kinsley’s client had been convicted in his trial, and she awaited the results of his sentencing.

As Kinsley walked out of the courtroom, feeling the weight of the sentence, someone came up to her and told her she had won her case in the Supreme Court.

“I mean I held it together long enough to get to the bathroom in the courthouse then came the tears. It was just a fold of emotions. You have to learn how to keep the emotion in check so that you can still do your job,” Kinsley said.

Kinsley seems to have this connection with most people she meets. She likes working with those who she feels needs someone to stand with the most.

“I like working with people who feel marginalized and who just really need to know someone stands with them and they count too,” Kinsley said. “But I have seen the positive influence that I can make in a person’s life just by saying I will stand by you.”

When Kinsley is not in a courtroom or a classroom, she is a mother to her five kids, a wife, a marathon runner and she also serves food monthly to people experiencing homelessness.

“I am busy, but I wouldn’t have it any other way. I don’t like to be bored, because being bored is worse than being busy to me. I don’t know what to do with myself when I can sit still, that makes me uncomfortable,” Kinsley said.