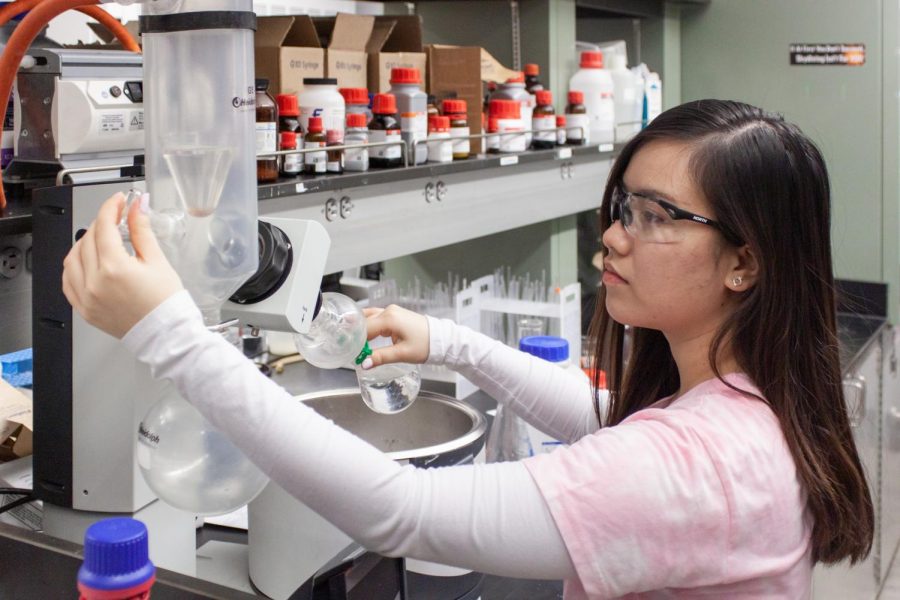 Quynh Nguyen works in a lab inside the science center.

In fall 2019, 36 new NKU students will join hundreds of current NKU students and alumni as members of the Scholarships, Opportunities, Achievements and Results (SOAR) Project as a recent National Science Foundation grant puts the SOAR Project back on its feet.

The SOAR Project began at NKU in 2008 in efforts to support and retain talented students in the Science, Technology, Engineering and Mathematics fields who are financially burdened. So far, there have been two iterations of Project SOAR, SOAR-1 (2008-2014) and SOAR-2 (2012-2017).

Each were funded by separate $600,000 National Science Foundation (NSF) grants. Due to a lack in funds, Project SOAR has not been able to bring in cohorts for the past two years.

This will change next fall 2019, when NKU will begin to use the funds from a recently awarded $1 million NSF grant to support SOAR-3. This third iteration will be lead by two co-principal investigators, Dr. Denice Robertson, assistant chair and senior lecturer in the Department of Biological Sciences and Dr. Bethany Bowling, associate dean of the College of Arts and Sciences.

In order to receive the grant, Bowling and Robertson—along with faculty and staff from Ferris State University in Big Rapids, Michigan—put forth a proposal to the NSF in March. This proposal included two research questions: “How [do] we introduce the idea of career to students early on in their time . . . as a STEM major?” and “If we [apply] this career immersion early on, can we see an even better retention rate compared to when we don’t apply that?”

In fall 2019, SOAR-3 will award 36 incoming freshmen STEM majors scholarships each year for the next four years. During their time at NKU, Bowling and Robertson will try to answer the research questions above. Hopefully, they said, their discoveries will assist other universities such as Ferris State and NKU on a broader scale.

A trademark of Project SOAR is the SCI 100 SOAR Freshman Seminar course. This is where McMillan and Nguyen formed many valuable connections and friendships.

The seminar is an introductory level course with the goal of preparing SOAR students for their futures at NKU and helping them build friendships with their SOAR peers. McMillan fondly recalls assignments that required them to attend certain events on campus together, such as a play put on by NKU’s Theater Department or a Norse basketball game.

“That kinda introduced us to NKU and then it helped us with like things that we could do on campus or ways to study and to get through – I guess – college in general,” McMillan said.

In addition to the seminar course, SOAR promotes shadowing experiences for its scholarship recipients.

In reflection on her time as a SOAR scholar, McMillan found that “the people I’ve met through the process” have been one of the greatest benefits and stated affirmatively that “it has helped people or broadened their interests.” Along with the connections she’s made, Nguyen said she has taken some great personal lessons from the program: “how to manage time . . . how to overcome your obstacles . . . how to be independent and . . . how to manage your life.”

In its 10-year history, SOAR has already forged outlines for successful community-building events and student roles such as bonfires, pizza nights and STEM Ambassadors.

As Project SOAR prepares for its third iteration, its coordinators said they hope to continue to be an example for fostering STEM majors, whose methods can be applied broadly.