‘Hope in others’: how to talk about thoughts of suicide

In any one year, over 17 million Americans report feeling depressed, and over half of all suicides are tied to depression.

The stigma of discussing thoughts of suicide can often lead to more feelings of isolation, experts say. So how can you help a friend, family member or even yourself deal with suicidal thoughts? 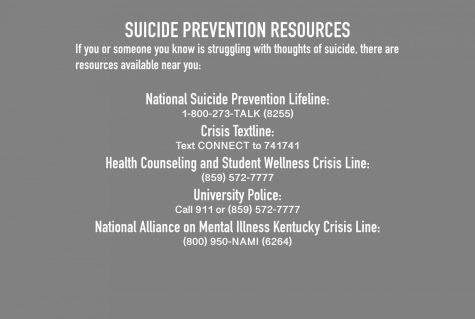 Signs of suicidal ideation—according to NKU assistant psychology professor Dr. Ty Brumback—can include withdrawing from activities, staying in bed for long periods of time, chronic stress and/or depression. However, there are always lots of contributing factors involving suicide and it doesn’t just happen in a “vacuum,” said Brumback.

Other signs of suicidal ideation can include sleeping too little or too much, increasing the use of drugs or alcohol, extreme mood swings, talking about suicide and/or talking about feeling hopeless—according to MentalHealth.gov.

“Other people are good at putting on a good face. But, inside, they feel really terrible or they’re having these [suicidal] thoughts,” Brumback said. “We can’t always just judge by behaviors.”

Brumback said friends and family members can check on those they care about by asking direct, probing questions—such as “are you feeling suicidal?” Allowing people to have an open conversation about suicide and suicidal ideation reduces the stigma surrounding it, Brumback said.

Feelings are just feelings. They’re not right, nor are they wrong. Sometimes they’re counterproductive and self-defeating, but it’s still how that person feels. They’re entitled to feel as they want to feel,”

Co- interim director of Health, Counseling and Student Wellness (HCSW) Lisa Barresi said asking a plain, direct question to someone who is feeling suicidal can relieve them and allow them to talk about it.

Assistant psychology chair and a practicing clinician for 35 years, Dr. Kathleen O’Connor said being supportive is one of the most valuable resources you can provide to a person who may be struggling. It’s important to care for others, include them, reach out to them and accept them.

O’Connor also added you can be supportive by being non-judgmental, encouraging them to talk about their feelings and accepting their feelings.

“Feelings are just feelings. They’re not right, nor are they wrong. Sometimes they’re counterproductive and self-defeating, but it’s still how that person feels. They’re entitled to feel as they want to feel,” O’Connor said.

O’Connor said another way to help someone is by assisting them in getting help or treatment.

If a student is in what they consider to be a crisis, they can go to University Center 440—where HCSW is housed—and tell the front desk they are in a crisis. Barresi said the student will fill out minimal paperwork and then will meet with a clinician right away to address the concerns; this service has no fees or charges.

Barresi said the only requirement is that the student is currently enrolled during the semester they are seeking out these resources.

Another resource at NKU is the after-hours line (859) 572-7777. A student calling will be connected with a University Police dispatcher, where they’ll ask for some information, and then the student can request to speak with the on-call counselor.

This line is also available for other students, staff and faculty to call, if they are concerned that a student is in immediate danger.

If someone you know is having suicidal ideations, Brumback said it’s important to refer them to resources—such as the National Suicide Hotline (1-800-273-8255), a therapist or to call 911 if their safety is at risk.

Barresi said another way students, staff or faculty can help a student they’re worried about is by making a student of concern report. Reports can be made online or in-person in the Student Conduct, Rights and Advocacy office in the Student Union room 301.

Once every semester, HCSW offers ‘Question, Persuade, Refer (QPR),’ a training session that teaches people how to spot suicidal behaviors, what questions to ask, when to ask them, how to get those struggling help and more.

QPR is also available for student, staff or faculty organizations with five or more members.

Coping with loss after suicide

O’Connor said that those affected by suicide handle their grief in their “own journey” and ways. There can be guilt when a loved one dies by suicide and many unanswered questions.

“We may never have an answer for them. I think that’s a very difficult thing for people to struggle with,” O’Connor said. “It’s a process of getting it resolved in your own mind and trying to come up with a way to productively live with what has happened.”

Part of the healing process can be expressing feelings and sharing how you feel with others.

“That’s how we start to heal; we tell our stories. We talk about the person who has taken their life,” O’Connor said.

Baressi wants anyone who is struggling with suicidal ideations to know that they’re not alone.

“Hope can be there in others. If I had to use one word to describe someone who is suicidal, it would be hopeless. Whatever their struggle is, they feel there’s no way out. And I think people can feel very alone in that and disconnected,” Baressi said. “There’s hope in others.”