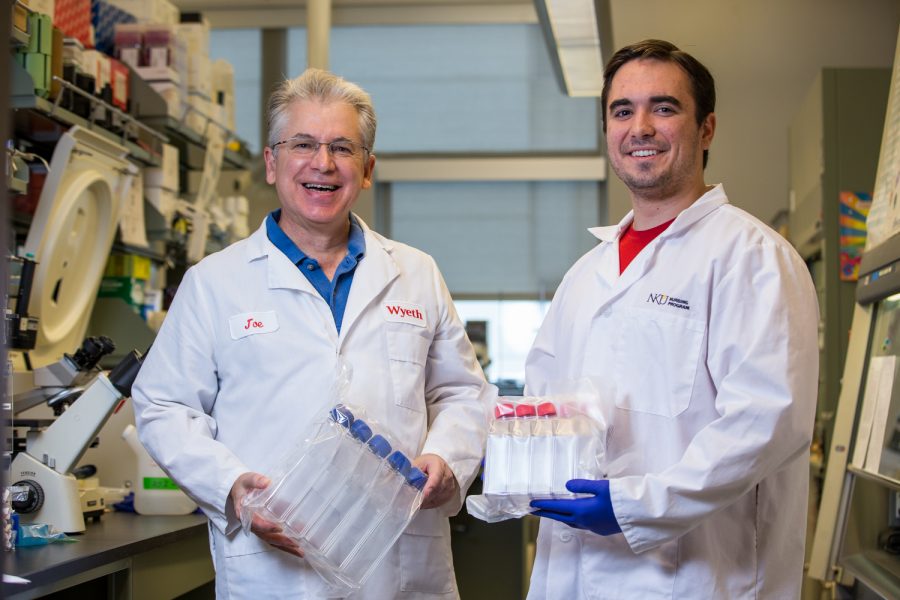 Dr. Joseph Mester has been working with students on developing a vaccine for hepatitis C since 2014.

There were nearly 3,000 cases of acute hepatitis C reported to the CDC in 2016, and an estimated 3.5 million people in the U.S. have chronic hepatitis C. Hepatitis C is a blood-borne pathogen, spreading through blood contact—such as sexual activity or drug use.

Currently, there is no vaccine for it—with treatment methods costing up to $1,000 per pill, according to Dr. Joseph Mester, associate biological sciences professor. Previously, Mester worked with vaccine trials for vaccine companies before coming to NKU.

Now, Mester is working with students at NKU to develop a vaccine for hepatitis C by using a partial hepatitis C DNA sequence in a herpesvirus vector that makes it infectious for cells. The DNA-based vaccine is propagated in E. coli, sharing part of the chromosome. To make the herpes simplex virus vector—a well-studied virus, according to Mester—they extracted the exact regions of the genome to make it safe and non-replicating.

In 2014, Mester ordered the hepatitis C gene sequence from a gene synthesis shop in Germany; they built part of the hepatitis C virus genome that Mester then inserted into the DNA of the herpesvirus vector system—also known as a carrier.

Since it’s mutated, the herpesvirus vector can’t grow or replicate outside of a specific cell packaging line said Mester. The herpes virus’ job is to get into a cell and make the hepatitis C vaccine proteins.

Once the vaccine DNA grows in E. coli, it is moved to a packaging cell line that wraps the DNA in a herpesvirus particle.

“Then, that can presumably bring the vaccine DNA into any cell, but it’s not going to cause disease,” Mester said. “It’s really just a way to gene shuttle and viruses are really good at getting DNA in.”

Hopefully, Mester said, the hepatitis C proteins will be made to activate the immune system when the DNA gets into the cells, resulting in the host building a memory immune response to the virus.

Junior biological sciences major Samuel Adams has worked on the project since his sophomore year. Adams described the process as a piñata. Without being modified, hepatitis C is like a piñata with candy inside of it, said Adams.

“Now, ours is just the piñata outside. It doesn’t have anything else inside of it. The immune system—who’s like a kid hitting the piñata—will see that and hit it, but there will be no bad stuff that comes out,” Adams said. “It’ll just crack and he’ll say ‘oh, yeah, that’s what I’m supposed to do.’ That way, it’ll be able to do that when it actually gets infected.”

The cost of going unnoticed

Hepatitis C can remain dormant in the body, going unnoticed for 10-20 years, said both Adams and Mester. According to Mester, hepatitis B and C seemingly don’t activate a response from the immune system to rid the body of the virus.

“The virus, similar to hep A, will stay asymptomatic in the body initially. You won’t even know that you have it…If you’re engaging in risky behaviors or even donating blood, you don’t know you’re shedding the virus,” Mester said.

The end stage of hepatitis C is liver failure. According to Mester, the cost of a liver transplant can often be more than the high cost of drug therapy used to treat hepatitis C.

“It lays dormant for people after infection for sometimes decades—half of their lives. And, then, will come out full force, and so quickly that some people go from completely healthy to liver failure in a few months,” Adams said.

The vaccine could be several years from clinical trials, Mester said. The next step would be to present the vaccine information, including safety, toxicity and immunogenicity data, to the Food and Drug Administration (FDA). The FDA may request animal testing in what Mester calls a safety trial.

The next phase would be to test the vaccine in healthy adults, giving different doses to see how it affects the person. After it’s deemed safe and that it generates an immune response, Mester said a trial would be designed to follow an at-risk population to test the vaccine for five or more years. There would also be a control group that wasn’t being tested for the vaccine.

After the trial, it would be determined if the at-risk group contracted hepatitis C or not. If the vaccine was successful, the FDA would hire experts to review the data. The experts would then determine the proper dosage to administer to people. Mester said that it’s then up to the public to get vaccinated.

Mester said once people get vaccinated, they’re generally effective and can almost completely eradicate certain diseases, such as measles in the United States.

Goals for the future

“I know, next semester, [Mester] was wanting to do more experiments with mice,” Messmer said. “And so that would be really cool to see if we could elicit a mouse immune response.”

Messmer became involved with the project after he took a virology course with Mester in his early years of college. He then began working on the project during his junior year.

Messmer said the most difficult part of working on the vaccine is managing his time. He works on the vaccine between two to three days a week for three hours at a time.

For Adams, working on the vaccine was “too big of an opportunity to pass up.”

“This could easily be passed off to a research company that could take this for decades, making new vaccines that are more effective,” Adams said. “That sort of hit me all at once freshman year.”

Mester said it was exciting to work on vaccines when he previously worked for vaccine companies.

“It was exciting for me to work on something that I thought was protecting lives and that at some point was actually going to be used,” Mester said. “Just to play a small part in, essentially, world-wide effort, for me, was really exciting. It felt like you were having an impact on public health.”