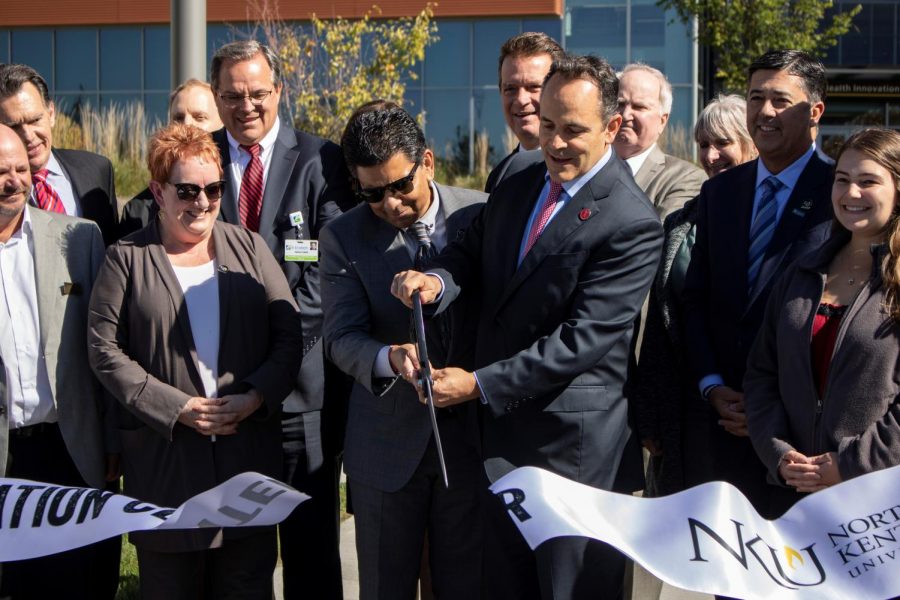 At Wednesday’s Health Innovation Center’s dedication, a crowd of people surrounded a tent in the outside parking lot, some sat beneath it while most stood outside of it, in the sunshine. Governor Matt Bevin was in attendance and closed out the dedication.

Bevin lauded St. Elizabeth Healthcare for their contributions to the community and the millions of dollars they have invested, individually thanked each state legislature present and the people responsible for setting up the dedication ceremony.

“We are aging and healthcare, more than anything else, is going to define what our futures look like. Not only for those under this tent, but frankly the health and vibrancy of this institution,” Bevin said.

Bevin stated that the HIC has over 45 beds, which makes it larger than some hospitals in rural parts of Kentucky. Further adding that the innovations made to NKU’s health education programs will better prepare our students to help the aging population of the region.

“The collaboration between neuroscience and kinesthesiology, some of these things are increasing the age of an aging demographic,” Bevin said. “A lot of the innovation is going to be done here. [Executive Director of Institute for Health Innovation Dr. Valerie Hardcastle] and others who come here who are thought leaders on this front, are going to attract other thought leaders.”

“The Commonwealth’s investment of $97 million was the largest capital expenditure in the 2014 budget. You recognized the benefit of this investment would not just go to the students but also the entire community and the region,” Vaidya said. “What stands behind me is a great way to demonstrate that commitment and that investment. We know our responsibility when you make that type of investment and that is to provide outstanding educational experiences for our students.”

Vaidya also thanked NKU’s strategic partners at St. Elizabeth for their continued support and investment in the region, which includes a new medical office building on Nunn Drive and U.S. 27.

“In our opinion, NKU’s next chapter will be based on advancing student success aligned with the needs of the region,” Vaidya said. “We recognize the need, that we have to provide even greater access to a great NKU education.”

Garren Colvin, CEO of St. Elizabeth Healthcare, stated that on behalf of the 10,000 employees he represents, it is an honor and privilege to partner with NKU on the HIC.

State Senator Wil Schroder, who graduated from Chase College of Law in 2008, called the center another testament of NKU’s growth.

“One of the benefits of living so close to campus is [my wife and I] have the joy of seeing the development we’ve seen, especially in the last few years. You heard from President Vaidya that students are now saying they want to come here because of the buildings. I can assure you back in 2005, that was not the case,” Schroder said to laughs.

Schroder continued by thanking NKU for meeting the needs of Kentucky’s workforce by building Griffin Hall and the new HIC.

After Schroder left the stage, State Representative Dennis Keene rose to the podium and pointed out that his childhood farm was where NKU’s baseball fields are now. He stated that NKU was a huge contributor to the development of the region and thanked the crowd for being so welcoming.

Cayla Destefani, a senior nursing student in the College of Health Professions, described the Albright Health Center to the crowd, how it was windowless and short on space, how the equipment was a bit outdated and some of the dummies they practiced on were so old they had to pretend they still worked. Destefani then elaborated on the numerous advancements the HIC is bringing to NKU, which include state-of-the-art simulation labs and a nurse anesthetist program.

“I know that I personally would like to earn my masters degree or higher in some field of nursing. I haven’t quite decided my specialty yet, but I’ve definitely considered anesthesia,” Destefani said. “NKU is at the top of my list of schools for continued education because I have seen the resources here that would benefit my learning experience.”

Bevin then spoke, gave a few more thank yous to the crowd, St. Elizabeth and NKU, the ribbon was cut and the dedication finished. Some of the crowd followed the governor, others dispersed, but the HIC is here to stay.