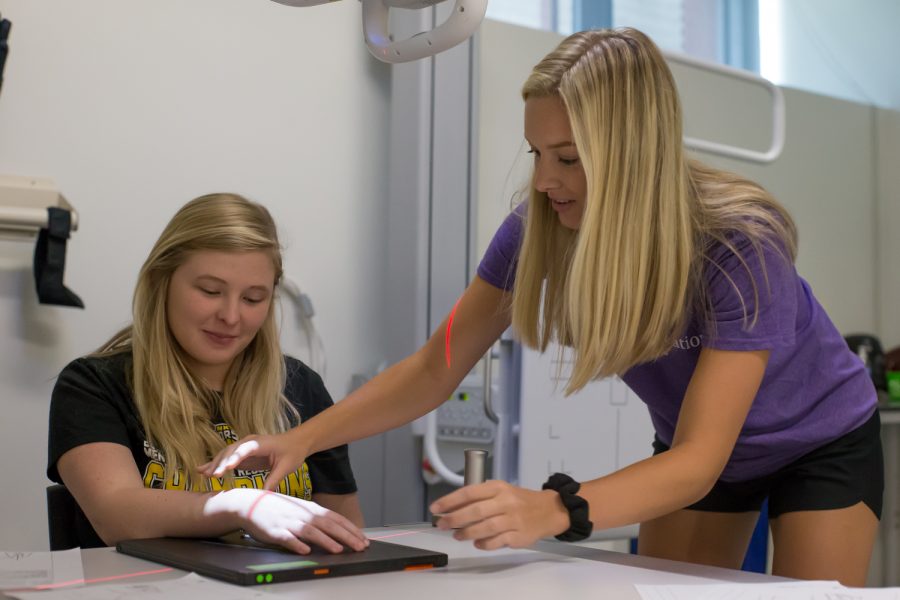 Caylee Duncan demonstrating how to use the X-ray machine on Emma Huff in the HIC.

After 12 years of planning and construction, the new Health Innovation Center opens its doors to students and provides a new home to the College of Health Professions.

There are 20 classrooms in the new building, compared to the six classrooms for health majors in the Albright Health Center. It is meant to be interdisciplinary, with classrooms being shared for health, political science, English, chemistry and even dance.

“I didn’t expect to see people hanging out there quite so soon but it was really from like the first day.” Schuh said.

Some of the most advanced facilities in the HIC are the simulation centers. There’s an operating room, labor and delivery, medical surgery, trauma bay and a pediatrics room. The trauma bay has four beds while the others have one bed.

“They [students] came the week before classes started and we gave some tours and the enthusiasm on their faces was just unbelievable because they were just really excited to see it compared to what we were in before,” said Gannon Tagher, chair of the Department of Nursing.

Students aren’t the only ones who are excited.

“The faculty likes the new space, they like teaching in the new space and I think that reflects on the students as well,” Tagher said. “I’m told we have one of the biggest simulation spaces in the country. I think we are at a great advantage at the moment.”

The space will give students in the College of Health Professions a big advantage, being able to work hands-on in situations they may later be in.

The simulation labs allow learning in a more strategic way that prepares students early on for when they go into their careers.

“It allows for real life experiences, as close as they can get in an environment where you don’t have any harm to the patient. That way, when you do that in practice, you can take that out into the real world and have muscle memory and knowledge of how to do it,” said Dale Stephenson, dean of the College of Health Professions.

Students are able to go into debrief rooms after doing a simulation. They watch the videotapes of what they did and are able to see what went well or what they need to work on.

“The thing about sim lab is they can safely mess up and learn from those mistakes. That’s the biggest part of the debrief process in sim. They do their simulation and the sims are videotaped and then they go into a debrief room with the class,” Tagher said.

The HIC is also expected to bring more incoming students interested in the College of Health Professions. This has already begun as this year we have one of the largest pre-nursing classes that we’ve ever had at 420 students.

Stephenson thinks by word of mouth alone, it will increase the exposure of the advanced health programs at NKU which in turn, will bring in more students.

Tagher said there is much more in store for the brand new HIC.

“What we are really hoping to do is collaborate with other health programs on campus. With this space and technology that we have, once everything is fully up and running we’ll be able to work on that and hopefully give the students some experiences that we wouldn’t have been able to before,” Tagher said.