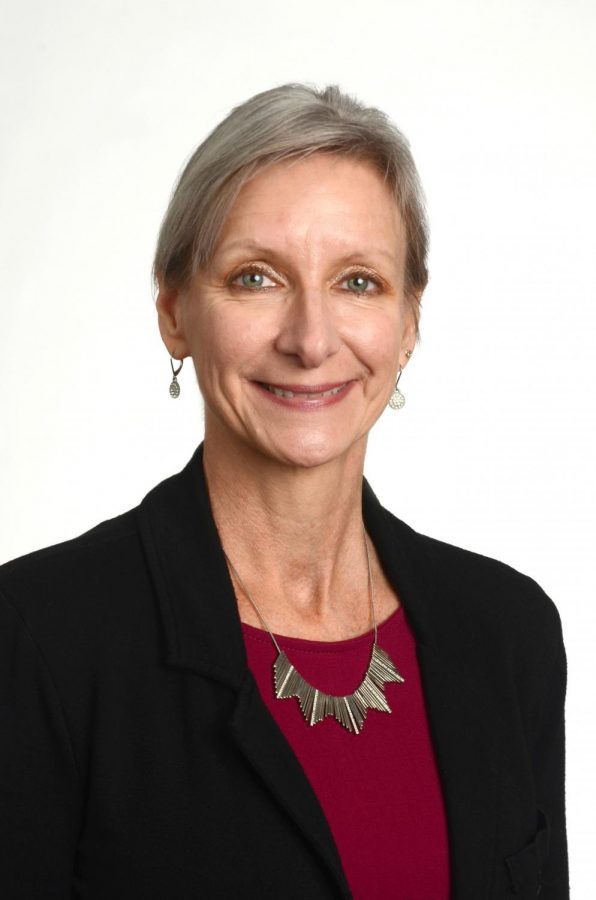 Valerie Hardcastle, executive director of the Institute for Health Innovation.

“She was a woman with a vision,” Dr. Valerie Gray Hardcastle said of her grandmother. ”Her vision was that the sons would get a college education and that was there way out of this abject poverty and the daughters would marry someone with a college education.”

Hardcastle, NKU’s first executive director of the Institute of Health Innovation, traced her family history back to the early 20th century.

“It really goes back to my dad’s family. They lost everything in the Great Depression and the Dust Bowl—they lived in the panhandle of Texas,” Hardcastle recounted. “Family lore says that they ended up having to live in a cave, obviously with no heat, no floor, no shoes… because there were no social services back then.”

Going through such hardship, according to Hardcastle, is what pushed past generations of her family to get an education. This transformative experience is something she believes changed the trajectory of her life and that of her family.

Though her parents never made it a priority for her to work in academia like her father, most of their children would follow suit. Today, Hardcastle is the executive director of UC Leadership, Empowerment, Advancement for Women STEM Faculty and co-director of the Weaver Institute at the University of Cincinnati.

“It was never the case that there was some explicit expectation that we had to join the family business or get a college degree. Nonetheless, the values of being educated were always present in the family,” Hardcastle said. “Around the dinner table, because he was a physicist and a mathematician, he would give us math problems to solve. I think joining the academy or becoming really educated was a part of the milieu of the family even though it was never explicitly stated.”

On her 16th birthday, Hardcastle’s father gave her a book that would further change the trajectory of her life.

“When I got the ‘The Mind’s I’ for my birthday and I read it, I thought if I could get paid to write this… to do this, I’m all in,” Hardcastle said.

Hardcastle attributes her sudden love of philosophy to Daniel Dennett, a philosopher and contributor to “The Mind’s I.” The book details many approaches to what self and consciousness are, a concept Hardcastle would study for the rest of her career.

“I wanted to be a philosophy major without really knowing what it was, I just knew he [Daniel Dennett] was that and I wanted to do what he did,” Hardcastle said. “When you’re in high school you don’t really know what you want to do— That was my beginning.”

“My fascination then, and in many ways, my fascination now, is trying to figure out fundamentally—what is it to be human?,” Hardcastle said.

“She is someone I would call a true interdisciplinarian.”

“I’ve known Dr. Hardcastle for a number of years. We first met when we were both at Virginia Tech and she at one time chairing the Department of Science and Technology in Society, which is a purely interdisciplinary department,” said NKU Provost Sue Ott Rowlands.

After conducting a national search for someone to fill the role of executive director of the Institute for Health Innovation (IHI) and vice president of Health Innovation, Rowlands and the rest of the committee decided to go with Hardcastle.

“She is someone I would call a true interdisciplinarian,” Rowlands said. “Her way of thinking about things and her way of integrating philosophy and neuroscience, and now population health and some of the real problems around addiction.”

With a focus on interdisciplinary and transdisciplinary work around campus, the goal was to work with a community stakeholder to help further a common goal in the community.

“We need to be exploring, not in our siloed disciplines, but we need to be learning and researching across those disciplines,” Rowlands said. “The world is so complicated that we need the perspectives of a variety of disciplines focused on any one given question or problem.”

The issues that NKU and St. Elizabeth hope the IHI addresses would bring in disciplines across the entire healthcare spectrum.

“If you can imagine that nurses and physicians and social workers and counselors, addiction specialists, and so fourth, might work in teams rather than independently to provide better patient care,” Rowlands said.

Rowlands believes that learning to work as a team will better prepare students for the future. This is a sentiment that Hardcastle herself echoes.

“It’s when you bring different perspectives together and you’re in the cracks between what one discipline does and what the other discipline does—where you’re trying to have a conversation around something that you both care about but you approach it from very different directions  “That’s where really interesting things happen. That, to me, is where you can make the most progress the quickest.”

“The world changes so rapidly.”

“I think [transdisciplinary education] is going to be crucial for the 21st century because the reality, is the jobs we’re preparing students for today probably won’t exist in 10 or 15 years,” Hardcastle said. ”Just look at what’s happened in the computer science industry and you can see that whatever we did 10 years ago did not prepare people for working at Google or Alphabet today, that’s just the reality.”

Hardcastle then posited,“What can we do to prepare the students of today to lead productive, engaged, healthy lives, where health is understood very broadly?

NKU has made an effort to involve the input of many separate but equal fields of study. Professors across campus have received funding with the intent to involve students of different backgrounds, like the Parker Project or the Ecological Stewardship Institutes depaving project. Being interwoven or being isolated have their strengths, and weaknesses too.

“Higher education has been discipline oriented and also it’s been university oriented, in that universities seem to be ivory towers detached from the communities in which they’re in,” said Dr. Rudy Garns, interim director of the integrative studies program.

Disciplines, according to Garns, serve an important purpose in in academics. They provide structure and consistency, which allow for people who study them to have a similar skill set.

“That being said, we also realize that real world problems don’t often lend themselves to simple disciplinary work. Real world problems, healthcare being a great one, are going to be complex.  They really need voices from different disciplines to come together and solve problems,” Garns concluded.

The changing nature of society, information and education force universities to adapt.

“I think the only answer is that you help them to learn how to learn across many platform. Content is cheap, we have Google, we have Wikipedia, we have the internet,” Hardcastle said.

Hardcastle posits her second question: “What do you do with these facts? How do you take the facts and then translate them into meaningful work?”

What does Hardcastle think?

“I think that going forward, the only way we’re going to answer that question, is by helping students get a lot of different skills in different ways of using facts. That, to me, is really what the basis of a transdisciplinary or multidisciplinary approach is about,” Hardcastle said. “It’s about taking the facts ad then having skills, multiple skills, in your tool kit and to be able to do something with that information that helps people, helps your career, helps society or whatever it is you’re interested in doing.”