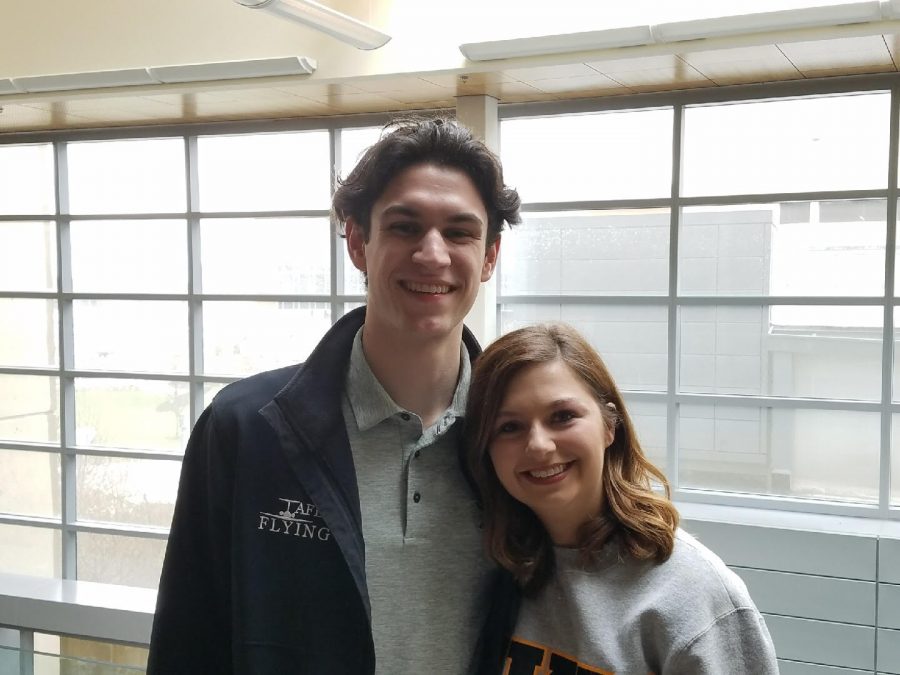 Matt Frey and Hannah Edelen at the SGA election results announcement in the Student Union March 30.

The results are in: Hannah Edelen and Matt Frey will be the 2018-19 student body president and vice president.

Spring election commissioner Hunter Poindexter announced the results to a crowd of about 40 gathered outside the SGA offices on the third floor of the Student Union on Friday.

During their run, Edelen and Frey said they would work to impose a dead week before finals, get more student discounts at local businesses and hold public forums on student issues.

“We really couldn’t have done this without the people that stood beside us since day one,” Edelen said. “This is more than just a student body here; this is a family.”

Frey, a junior economics major, is also thankful for the support of the student body, but says “we need to keep this momentum going.”

“We need to make sure that everyone has the same passion and energy that Hannah and I have for these issues moving forward,” Frey said.

One of those issues is the “furthering of student worldliness and diversity education,” an issue that needs more focus, according to Frey.

“It takes a village, and the NKU community is representative of that and all of the opinions and groups within this campus,” Frey said. “We need to make sure that they’re represented correctly and that we continue to reciprocate the support that they’ve shown us.”

Presidential runner-up and SGA Chief of Staff Taylor Gagné said he thanks his supporters and wishes the winners the best.

“I have confidence in Hannah and her plans for NKU,” Gagné said.

WE DID IT! Thank you all so much for all of your continued support and dedication. We promise to serve our students to very best of our abilities. We are so excited to begin this journey with you all. #IPFA4NKU 💛

As for Edelen and Frey, they are looking forward to using this opportunity to bridge communication with all students and reinforce NKU’s values.

“I hope that we can create that same support that we had alongside us and bring that to everyone here at this university,” Edelen said.

The SGA president chairs the student senate and serves on NKU’s 12-member Board of Regents and the Kentucky Board of Student Body Presidents. Vice presidents represent students in Faculty Senate and Staff Congress.

View the full results of the SGA election below:

The Northerner’s Sam Rosenstiel contributed to this report.