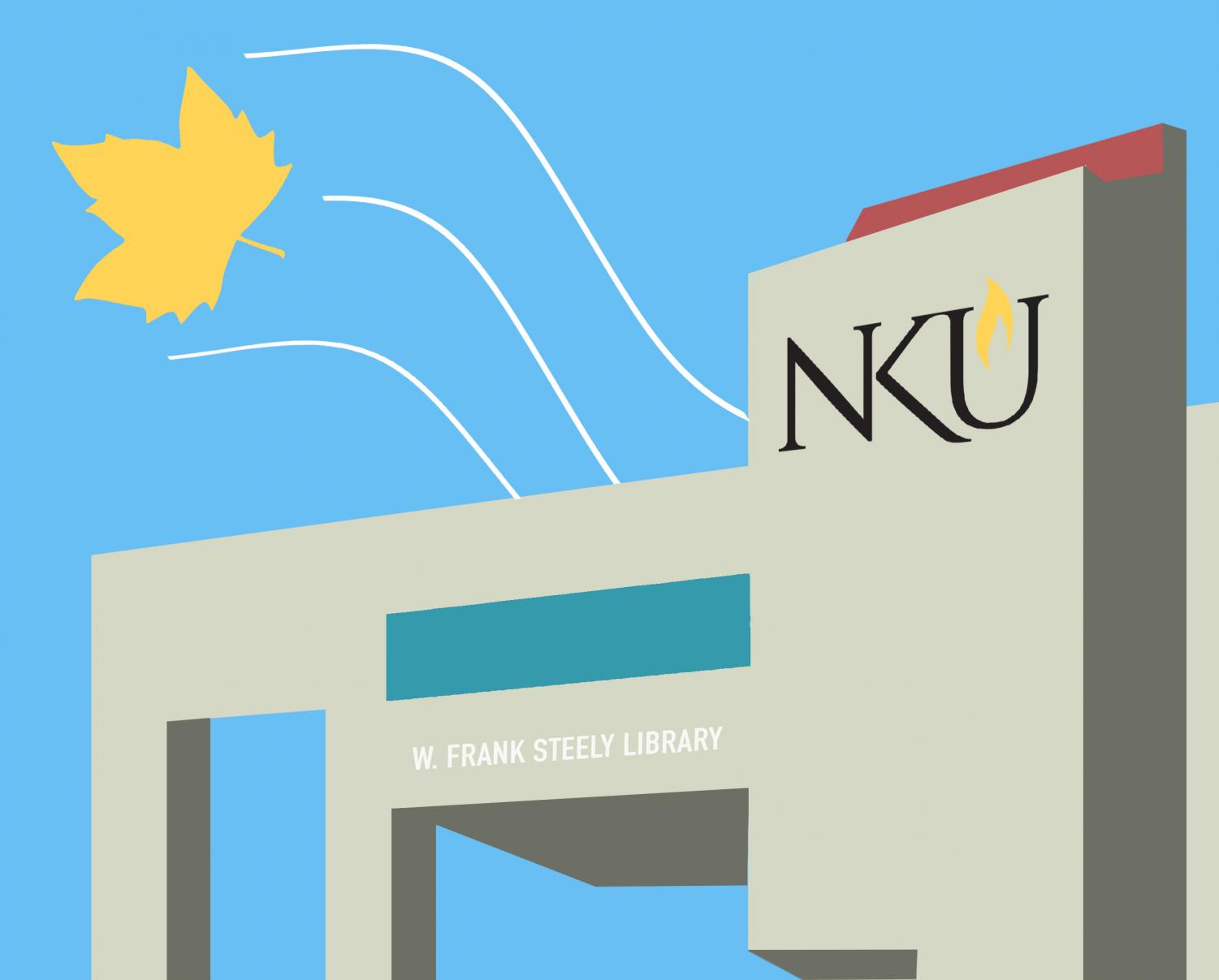 Why is NKU so windy? (Illustration by Sam Rosenstiel)

Why is NKU so windy?

Any way the wind blows: why campus is so windy

A bespectacled Dr. John Metz stands next to a window in the offices on the fourth floor of Landrum Hall, gesturing to the cityscape – not a cloud in the sky to obscure the view of downtown Cincinnati.

“You can see that we’re kind of high up here,” said Metz, the geography department’s program director. “Nothing is impeding airflow.”

From all the way up here, it’s pretty clear why it’s called Highland Heights. According to Kentucky Place Names by Robert M. Rennick, the area was called “The Highlands” for most of the 19th Century because of its relatively lofty elevation.

“We live at the bottom of an ocean of air, so the weight of the air is what creates atmospheric pressure. If we go down lower, then it’s like when we’re swimming and go deeper,” Metz said. “You see, you’ve got more on top of you, or if you go up to a hill you have less.”

Metz drew a rough diagram of the United States as he explained that low pressure systems drive our weather patterns. These systems are spinning masses of air in the sky that pull in air of different temperatures while reducing the pressure below them.

“The bigger the difference in pressure, the stronger the winds,” said Metz, while doodling the rest of his explanation on his sketch of the U.S.

According to Metz, scientists use a unit called millibars to measure atmospheric pressure. On an average day on campus, it’s about 1000 millibars.

Due to NKU’s higher elevation, the atmospheric pressure is less, and when low pressure systems reduce that further, the winds get stronger.

Can we use wind power here?

Simple science explains why it’s windy, but can this wind be used for something more than making it impossible to use an umbrella when it rains? According to Tess Phinney, NKU’s sustainability manager, wind turbines have been a topic of conversation before. The U.S. Department of Interior believes wind power to be very cost heavy upfront, meaning it would be a big investment for campus.

“Contrary to what it feels like on those windy days, the wind-flow charts for our region do not project steady-strong winds over extended periods of time,” Phinney said. “That, combined with the expense of these machines, means that they wouldn’t have a big enough impact on our utility usage that could justify their purchase.”

Windy days might stand out more to folks because of the hassle they cause, but data collected by Western Kentucky University’s Mesonet supports this statement. In the last month Campbell County has seen only four days with the average winds exceeding 10 miles per hour. Quality wind resources are classified by the Department of Interior as being an average of 13 mph annually.

Dr. Kirsten Schwarz, an urban ecologist and associate professor of biology at NKU, has spent many years studying urban environments and the systems within them. While some believe the design of the campus might cause such uproarious winds, Schwarz doesn’t think that’s the case.

“The presence of pavement, that can have an impact on water movement on campus,” Schwarz said.

If NKU has anything in abundance it’s pavement and impervious surfaces, and the narrow channels between buildings might make the breeze pick up. According to Schwarz, the hard-edged architecture of campus lends itself mostly to water runoff. NKU’s design may still have an important effect on students, regardless of how fast the wind blows.

“Something that we talk about in urban ecology, because we talk about urban form and how cities are designed and how that affects your experience when you’re moving through the city,” Schwarz said. “The same thing happens in campus — how you design your campus influences how you experience that campus.”

How students interpret the campus is another question entirely. Changes stemming from NKU’s master plan and a push to expand could alter student focus as well. Phinney, however, is not ruling wind turbines out yet.

“This technology can be an excellent tool for educating the public about the importance of alternatives to fossil fuels,” said Phinney. “And if students are passionate about this and want to work with our office to search for grants, we would welcome that opportunity.”