With help from France, STEM students get a fighting chance 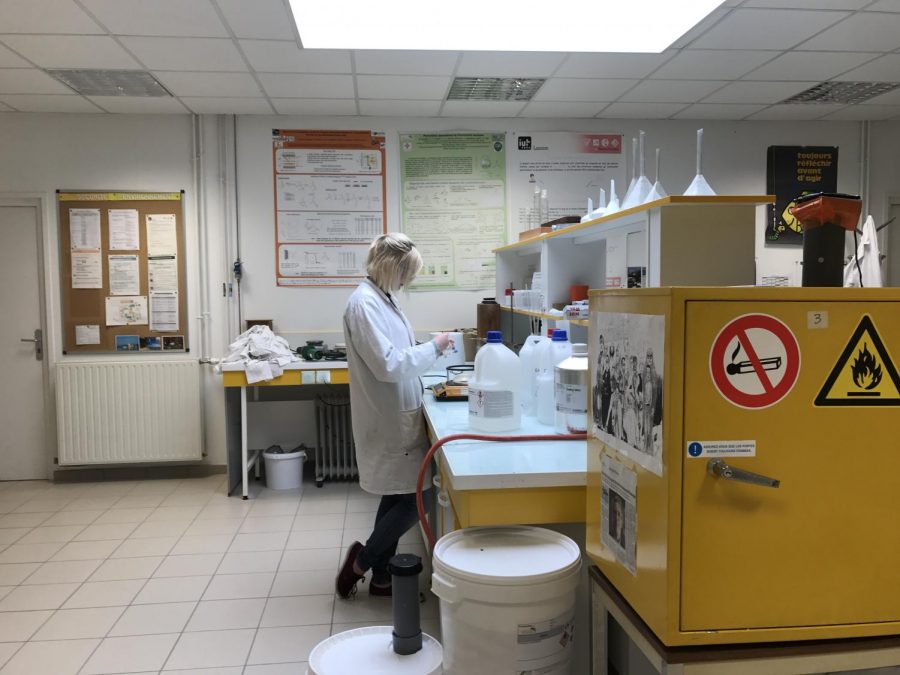 Allison Gast, who traveled to France through STEM-IRSEP this summer, working in the lab while in France.

While it may not have been top secret or wrought with danger, Dr. Isabelle Lagadic just returned from a high priority international mission. Her charge? To give NKU’s STEM students a fighting chance at studying abroad.

Lagadic, an associate professor of chemistry, has helped develop and maintain NKU’s International Summer Internship Program, which hosts students from France, Romania, Ecuador and as of this year, South Korea. These international students stay between 8 to 12 weeks and are often aided by a student from NKU.

Katie Sawvell, a junior biology major, is one such student.

“When those students come, typically I’m the first one that meets them and shows them around,” Sawvell said.

Her involvement has spanned her entire collegiate career. She helped students from Ecuador and France her freshman summer and since then has been heavily involved. Through all of these connections from across the globe, Sawvell managed to meet one of her best friends and see more of the United States than she ever thought she would.

“Last summer I got really really involved. We went to Chicago, New York, DC, Nashville, Louisville and every summer I’ve taken them back to my family and they make them all dinner,” Sawvell said.

She’s not the only student introducing foreign students to the American way of life, however. Logan Toler, a junior CIT major, is a member of the American English Language Program (AELP). This program connects students from NKU with students abroad in the hopes that both can learn something from one another.

“I’m basically their conversation partner and I show them different American norms,”  Toler said of his experience with the AELP.

Toler is currently working with someone from Senegal, a French-speaking country on the west coast of Africa, and hopes that he can learn a few things about the culture to give him a leg up when he gets the chance to study abroad.

Toler and Sawvell are both in a similar situation. They’re STEM students with packed class schedules, which means leaving even for a summer could have an adverse affect on their education. Not all classes offered abroad count toward one’s major upon return to the states, and this isn’t something that some STEM students are willing to chance.

“Usually the students that want to go abroad are also the very high achieving students and they want the complete experience, Lagadic said. “When you tell them you may have to graduate a semester or year behind, that’s a problem.”

Special circumstances can allow for American students in demanding programs to receive credits from learning abroad, but those have to be negotiated and still often delay graduating. Different countries have different curriculums; the credits might have more or less weight like currency does. Lagadic wasn’t going to let that prevent her from getting students from STEM an equal chance to see the world.

During her discussions with the French Embassy, Lagadic helped negotiate an $18,100 grant which will be awarded by the Transatlantic Friendship and Mobility Initiative. NKU matched this grant, bringing the total to $36,200 for STEM students looking to study abroad.

According to Lagadic, with the support of the Transatlantic Friendship and Mobility Initiative, NKU can send 10 students abroad to study with our French partners at The Institut Universitaire de Technologie de Lannion and the Université de Rennes 1.

Sawvell and Toler will be the first of 10 to receive funding from this grant and the opportunity to travel across the Atlantic. They will spend a semester in France, partaking in summer research and courses in the Fall.

Other STEM students looking to take advantage of this opportunity may have the chance to study for a semester and/or conduct research for a summer. This is a major win for NKU’s STEM International Research and Scholarly Exchange program (STEM-IRSEP) as it is the first external grant it has received. The chance to study abroad isn’t just great for academics, Lagadic believes it provides a unique learning experience to students.

“Studying abroad is going to bring the student some skills that we cannot teach them. Like getting by, you know, if they don’t know the language very well, if they’re in the street, it’s getting dark, and they’re kind of lost, they don’t know where their dorm is. They need to get by. That is something they need to figure out on the spot,” Lagadic said.

Through Lagadic’s efforts STEM students now have a chance to see France, study abroad, and receive viable credit hours upon return. There is still more work to do for Sawvell and Toler though. Like other study abroad programs, they need to have a working knowledge of France and its culture. Having grown up in France, this is something Lagadic hopes to help them with. Though they won’t be departing until next year, Toler and Sawvell look forward to experiencing France and all it has to offer.