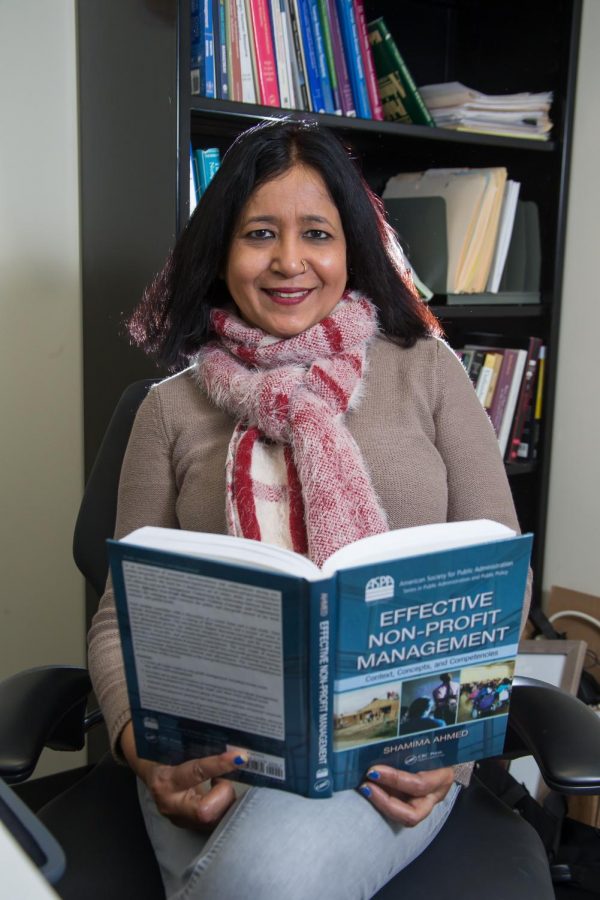 Ahmed, new member of the Fulbright Specialist program, sits with one of her published works

Political science and organizational leadership professor Dr. Shamima Ahmed immigrated to the United States to earn her master’s degree in 1984. In 2018, she’ll travel overseas again: this time as a member of the Fulbright Specialist program, which sends U.S. professors overseas to work at host institutions.

Ahmed will be on the roster for three years and will be able to re-apply after two years. While on the roster, Fulbright can send her to different countries to teach, conduct research or enhance their curriculum.

“I have been thinking about applying for this for the past—I think—eight or nine years…those seven-and-a-half years were very busy because this is a very large department,” she said.

She was the past department head for political science, criminal justice and organizational science–during which she began researching how to apply– before stepping down to faculty.

“I needed to take some time to apply, and I didn’t have time to apply,” she said. “I also thought, ‘if I get this scholarship, I cannot just leave town for six weeks.’”

Part of the application process required Ahmed to write essays on her qualifications, her background and why she felt she was suited for the position.

Her educational background includes a Ph.D. in Public Administration from the Virginia Polytechnic Institute & State University along with a master’s in Urban Studies from the University of Akron.

Flexibility was a huge factor for her, and she said she sought out a short program that would work with her schedule.

Ahmed hopes to go to a country that she doesn’t know much about, so she can engage in learning, as well. She doesn’t just want to make a contribution: she wants to make a difference.

Ahmed hopes that she will be able to develop a long-term relationship with the universities she engages with, so that programs could be developed that would benefit both NKU and the university she will work at.

“I’m just hoping that I will come back feeling that I learned something new. I think it will make me more matured. I think that’s what learning does,” she said. “The more you are learning, you become a more matured person.”

Ahmed thinks that teaching in a different country, in an environment she’s not used to, will broaden her perspective and help her learn about other things–not just the country she’s teaching in.

“I always love to travel because every time I went to a different country, I realized I not only learned about them, I also learned about myself too. I think it’s fun to learn, and I want to keep doing that,” Ahmed said.

Ahmed tells her students that she’s learning in the classroom as well, and she hopes that will continue when she travels abroad.

“I think we stop growing, if we don’t keep learning,” Ahmed said. “There’s no end to learning. I feel there’s so much more that I don’t know, and I would like to learn.”