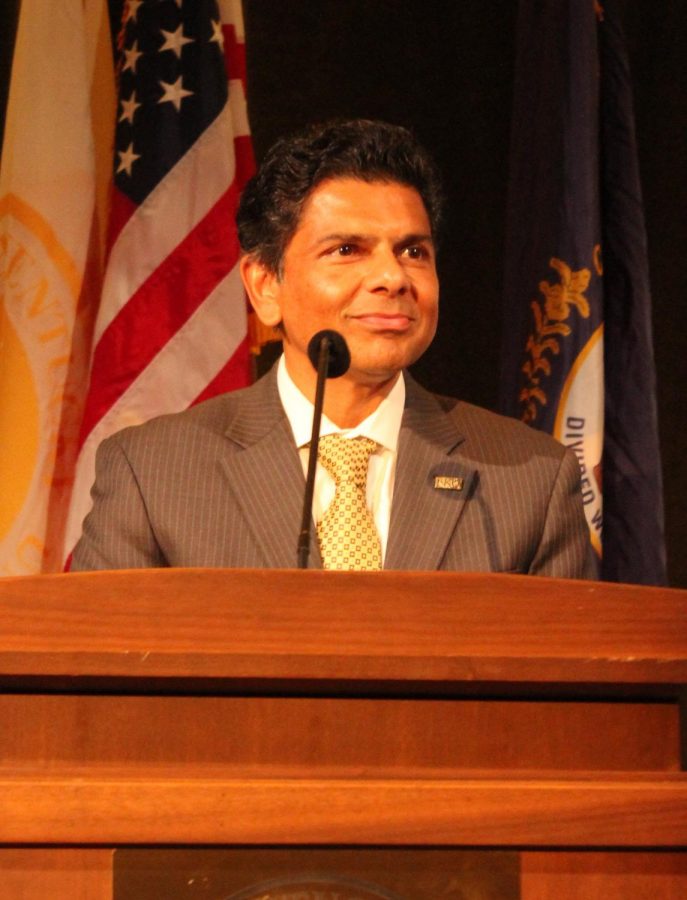 NKU’s Board of Regents named Dr. Ashish K. Vaidya as the university’s sixth president at a special meeting on Thursday.

The board voted unanimously to elect Vaidya, the current interim president at St. Cloud State University in Minnesota.

“I am so delighted to start this journey with you,” Vaidya told over 200 students and administrators at Thursday’s announcement in the SU ballroom.

He received a bachelor’s and master’s degrees from St. Xavier University in Mumbai, India and a master’s and doctorate from University of California, Davis.

Vaidya will assume the role on July 1, 2018, taking over for Amand. Until then, Vaidya will continue to work at St. Cloud State.

Vaidya said he first learned of NKU from reading a report on stewardship written by the university’s fourth president, James Votruba. Vaidya said he was particularly inspired by NKU’s mission of community engagement.

During financially “challenging times,” Vaidya said he will advocate for more performance-based state funding and for a solution to Kentucky’s pension problem.

“We will do this together, that I assure you,” Vaidya said. “I look forward to being your advocate, ambassador, and champion. Be it in the corporate boardroom, be it in the state legislature, or in the governor’s office.”

Vaidya, who grew up in India and came to the United States 32 years ago to pursue a doctorate in economics, said he will focus on issues of diversity and privilege with an emphasis on giving back to the community.

“The opportunities and choices available to people in many parts of the world are still constrained by that accidental nature of their birth, and we are fortunate that the notion of opportunity and intergenerational mobility, two enduring aspects of life in the United States, are alive and well at places like Northern Kentucky University.”

This is a passionate, can-do community with an unstoppable future.”

Spanning eight months, chair of Board of Regents Rich Boehne said the presidential search was a long process.

“We were looking for someone who has a great academic record, entrepreneurial, somebody who is willing to lead the university through a bigger picture of itself, even,” Boehne said.

With a background not only in academia, but as an economist as well, Boehne said that Vaidya was immediately on the search committee’s radar.

“When he talked–starting with the search committee–about his passion for students, and especially students in a metropolitan and diverse community, students that need what we provide, that’s what made the big difference,” Boehne said.

Boehne said that when selecting a president for a university with a history of excellent leadership, it is important to keep looking forward.

“When I first met with Ashish, I had described this as an adventure, and we built that into the profile and we really meant it. This is an adventure and it should be,” Boehne said.

Vaidya said he is enthusiastic to start his new adventure at NKU, and that he looks forward to upholding the university’s values.

“This is a passionate, can-do community with an unstoppable future.”