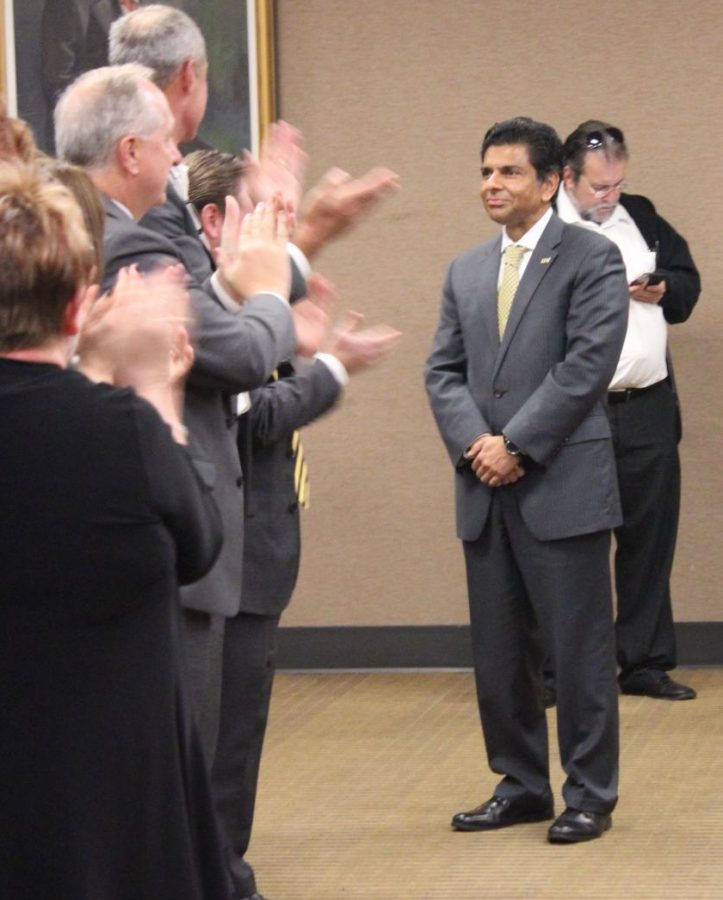 Board of Regents meeting attendants applaud as Dr. Ashish Vaidya is voted NKU’s next president.

The father of two (three if you count Coco, his chihuahua) currently serves as interim president at St. Cloud University in Minnesota.

He received bachelor’s and master’s degrees from St. Xavier University in Mumbai, India and a master’s and a doctorate in economics from the University of California, Davis.

In one sentence, Vaidya said he’d summarize himself as “super excited to be joining NKU.”

The Northerner: In the past, NKU has been criticized for its handling of sexual assault. Can you speak on how you plan to not only address campus sexual assault but also indicate that it won’t be tolerated on our campus?

Pres. Vaidya: I try to relate it back to my own personal thinking and feeling. As a father of two children, both a son and a daughter, I understand the responsibility, but also the vulnerability in these kinds of situations. You always try to think about what happens when individuals are placed into those kinds of situations. Nobody needs that. Nobody deserves that. The human potential is such a powerful force.

I will pay very close attention to what the institution has been doing and has done and what else we could be doing. What I found has been tremendous is just engaging students in conversations, to give them the space to say what they think. I have learned so much from my students and they are what makes my job worth doing.

You try and look at opportunities for growth and development. To hone in the message: it has to be intentional. It can’t be just left to chance. What are the workshops? What are the further things we could be doing from day one? It goes back to our relationships in K-12. It’s not like suddenly things happen. In college, there are challenges that are occurring in high schools as well. We have to work with our partners across the board to ensure that we create a safe, learning, invigorating environment for all students.

N: Kentucky’s state legislature and Gov. Bevin are drafting pension reform. NKU contributes over $18 million to KERS (Kentucky Employment Retirement Systems) per year, up from $3.3 million nine years ago. Benefits have not changed for our pensioned staff. As an economist, would you be in favor of a defined contribution plan for pensioned employees, much like the system that is currently in place for faculty and upper administration?

V: I think that’s a challenge. I want to be careful that I don’t come in with preconceived ideas and notions. As what most economists are taught to do, they would study the situation, look at the pros and cons and recommend a course of action. In this case, it’s really about saying what’s best for the institution, the state, the people, for the staff and faculty, that makes the most sense for us. This is a nice thing to have a transition period because I can do a lot of learning when I’m still keeping my day job [at St. Cloud State University] to learn more about this institution and the landscape we find ourselves in, not just here but in the Commonwealth of Kentucky. I’m looking forward to understanding the issue more in detail and maybe even speaking to some of the legislators and to the governor [and ask] ‘How do we approach this?’ If it’s a problem to solve, then let’s put our best minds to it and figure out a way that makes the most sense.

N: Political and religious action groups have come on campus to promote their point of view with signs, displays, and preaching sessions. Some see this as an important right that must be upheld, while other students think these protests are inappropriate for a learning environment. How do plan to strike that balance between free speech and a learning environment?

V: At the core, a university is meant for the free exchange of ideas. So that we can all challenge each other, think about better outcomes, better ways to do debate and discussion. It’s why we enter academia, so we can challenge our students in the classroom, outside the classroom and so on.

Above all, it has to be done in a respectful, civil manner. The hallmark of a democratic society is the ability to engage in this kind of meaningful dialogue and discussion: with full respect of individual points of view, but at the same time in a civil way that doesn’t create any kind of challenging environment where people feel more threatened.

Our obligation as an institution is to protect our students, our faculty and staff. Primarily, that is the number one priority. Stifling debate and discussion are not what institutions do best, but in creating an environment in which we can all have a meaningful conversation there’s a fine line between that and what can be considered inciteful speech, which there’s no place for. You will find that over the years that I will not shy away from sharing my point of view. I think that’s important for people to understand. I might, for example, a speaker is invited to campus and they have views that I not only find troubling but completely disagree with. I have no problem saying, ‘I completely disagree with that point of view, and here’s why,’ but that person has the right to be able to come in, as long as we have safety and security… the democracy, for us to have means that we have to be able to foster that spirit on campus as well.

N: NKU is a developing campus, with the Health Innovation Center and the Connector Road nearing completion and housing renovations set to start in January. How do you see NKU continuing to grow in the next five years?

V: I think that’s a very exciting part of this institution. I think that all those exciting things are happening, and they’re happening with a purpose, the purpose of where this institution has come from and where the institution is going and how it can even continue to better serve students in the region. It’s not that this is some pet project, or that we’re putting something up that’s nice. It says, ‘this is what’s needed for this region, this is how we can benefit students and how we can benefit the community.’

Whether it’s the HIC and prior to that, the College of Informatics…we have to be in step with what the future is so that our students can be well-positioned in this global world. There are all kinds of new technology and changes, so how can we be responsive and even proactive to think about the kinds of things that would position this university to better serve students?

N: In your speech, you addressed diversity and told the story of a teaching moment you had with your daughter about privilege and opportunity. Can you elaborate on that?

V: It was a very sweet story. I thought, maybe, this was a way for the university to get to me a little better. She’s now 26, gainfully employed and doing very well for herself. She’s still actively engaged and doing lots of things. Her big thing is empowering women in STEM and business so I’m really pleased to see how she’s grown and blossomed. As a parent, you never really know if any of the things you say are even listened to or absorbed.

The incident had such an impact on her mind, I think because that’s what framed her whole point. I think she saw that little girl on the side of the road and suddenly realized how different her situation was a thousand miles away and all the opportunities she was afforded because she was born into a household. We were so proud as parents to say that she has a much a heart as anybody else. I shouldn’t leave out my son, he’s doing pretty well, too.

V: I was very pleased to see that [diversity] is one of the core values of this institution, and that spoke to me because I completely believe in the power and importance of diversity and inclusiveness. We live in a global world. We must learn to appreciate (not just tolerate, but appreciate) and learn from each other across borders. At the core, we are so much more alike than we are different.

From an economist’s standpoint, diversity is a source of strength. When you have different points of view, both inherent diversity: the one that you are born with in terms of background and culture, but also the one that you absorb by looking around you. That’s why I believe in study abroad for students, because getting that perspective changes their view of the world. I think anything we can do as an institution to keep some of that going is great.

If you put five people that think alike in one room, I don’t know how many ideas that you could come up with, but you embrace the diversity of thought, ideas and perspectives and the richness that comes from that–I’ve seen that in action. You need to be engaged with different people and cultures.