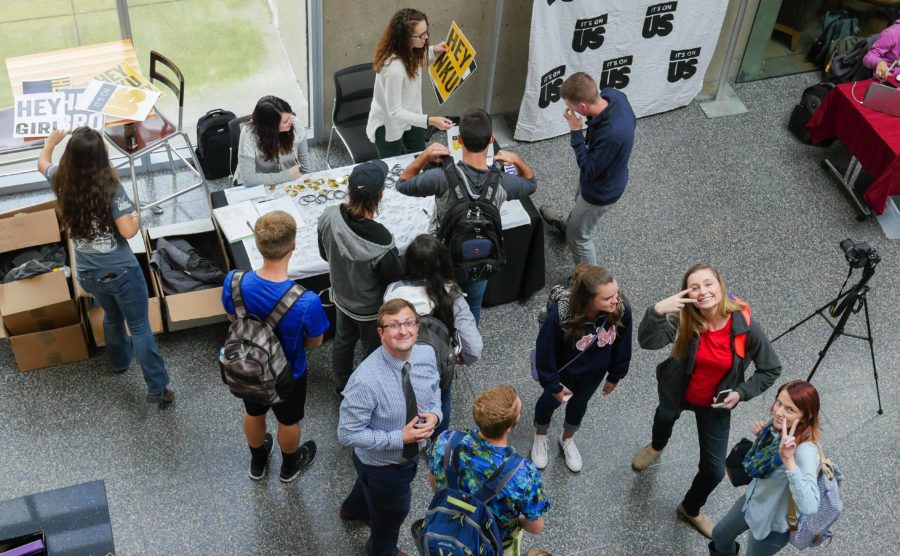 Student’s Use ‘It’s On Us’ photo booth during their 2016 campaign. The 2017 campaign wrapped up last week.

As the student body responds to sexual assault cases emerging on NKU’s campus, resources like the Norse Violence Prevention Center work toward breaking down stigmas and providing support the same way they always have: education.

In recent years, NKU has implemented the Haven Module: a comprehensive assessment put in place to provide information about sexual assault and misconduct as it relates to the campus community; with this, the program aims to educate.

“I think that students are aware of our policies, procedures and our resources more than ever before,” James said. “It’s focused on education, prevention, and resources. I think that it’s pretty effective.”

The NVP center has also helped NKU try to improve their education in regard to sexual assault.

Gabby Dralle, Director of the Norse Violence Prevention Center, said she believes that education is needed to prevent sexual assault on campus.

The center aims to serve as an advocate and support system for survivors of sexual assault and domestic violence. They present programs throughout the year–panels, mixers, class presentations and larger events like ‘Take Back the Night’–and offer resources to survivors on NKU’s campus.

“We really want to try to get continue to get in front of different groups of students so we can build on the knowledge that they have already gotten and get into skill development,” Dralle said.

“Every new year is a new year where we have gained more knowledge about what does work and what doesn’t work, and what students enjoy and what they don’t enjoy in terms of education and programs that we offer,” Dralle said.

The NVP Center has been able to learn what works and what doesn’t through assessments and questionnaires from years past.

Allison Kumar, student coordinator for the NVP Center, said she assists with program and event planning, as well as conducting her own research on this social issue.

“I’m searching for ways in which sexual assault survivors or survivors of domestic violence survivors feel supported or when they feel the opposite,” Kumar said. “The last thing that we want is for people to undergo an experience as traumatic as that and then feel as though they don’t have people in their corner.”

In Kumar’s research, she has found that the rate of false reporting is very low and said that this is why we should believe people when they come forward and say that a sexual assault has happened.

“The statistics on false reporting are severely low and people don’t realize that unfortunately,” Kumar said.

Through her research, Kumar has new knowledge that can improve the NVP center and how they interact and advocate for survivors on campus.

Within the center, Dralle and Dektas are two confidential people that survivors can speak with.

“I think that’s why a lot of students do feel comfortable into this office for help, because they may not want to report and most people don’t,” Kumar said. “Once a student comes into this office, it really is a safe space for them and it’s personalized to whatever they need.”

In Kumar’s opinion, it is important to not jump to conclusions when someone is telling you about an assault they experienced. Some survivors may not want to report their assault right away, or at all, she said.

According to RAINN, only 344 out of 1,000 sexual assaults are reported to police (or 2 out of 3 cases), which means the majority of cases remain unreported. For college females, only 20 percent report their sexual assault compared to 32 percent of non-student females.

Reasons survivors said they did not report their case to the police, according to RAINN, include fear of retaliation from their perpetrator, feeling as if their case wasn’t important enough, believing the police would not and could not help and not wanting to get their perpetrator in trouble.

“It’s On Us” is a national movement with a goal to end and educate college students about sexual assault. The event has taken place on NKU’s campus for a few years with Greek life at NKU taking part.

“[‘It’s On Us’] gets students thinking about, ‘What am I doing to actually help in this epidemic of sexual assault on college campuses?’ and I think that sticks with you a lot more,” Kumar said.

Kim Vance, director of Fraternity and Sorority Life, said she believes that the movement goes along with Greek life in various ways.

By having the Greek life community involved in this movement, it provides students the opportunity to be engaged in a social issue.

“We [the Greek life community] are members of values-based organizations and at some point, somewhere, in everybody’s values is something about human dignity and making the world a better place,” Vance said.

“Its an opportunity to be engaged in a social issue of our time, that the fraternity and sorority community need to be engaged in,” Vance said. “We [the Greek life community] move in herds and if we’re all wearing the same t-shirts, it’s noticeable and people stop, and they read it, and they start checking it out and they learn about the ‘It’s on Us’ campaign is.”

A new organization, HOPE (Helping Others, Prevention, Education), wants to educate students on campus about sexual assault and domestic violence; the president, political science senior Hali Wagner, is at the forefront.

“We try to push people towards knowing more because even just 10 more people knowing more about the topic may save someone from experiencing [sexual or domestic violence],” Wagner said, “or it may help while they are experiencing something.”

To become a member, email hope.norse@gmail.com. Their membership is open to anyone who is willing to support survivors and educate others on campus.

“We [NKU’s HOPE] try to educate about those things because there are people sitting next to us in class that has been sexually assaulted,” Wagner said. “HOPE is a short-term program for a long-term solution.”

Wagner believes that this is not a gender-specific issue since men can experience different types of abuse: emotionally, mentally and physically.