Cincinnati Woman of the Year overcomes homelessness to help others 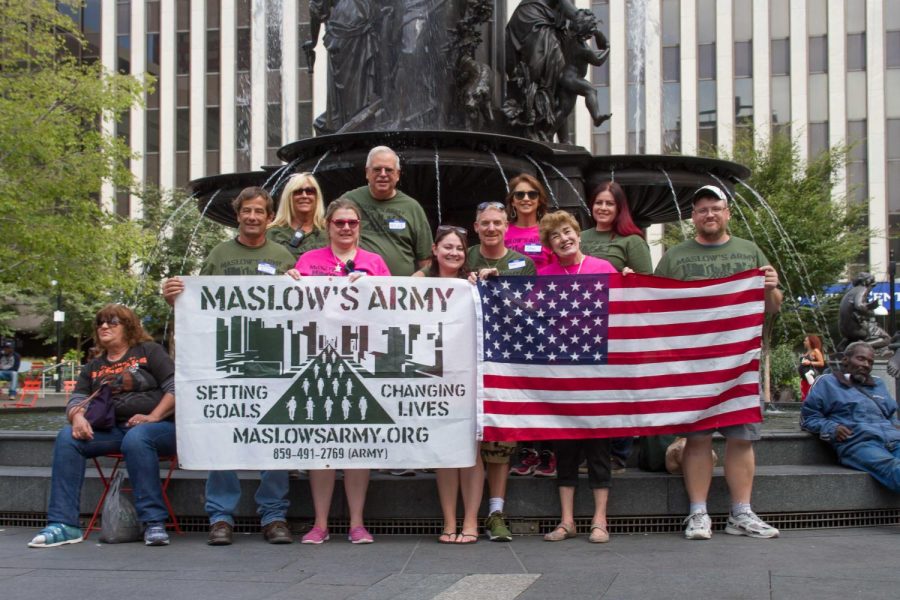 Maslow’s Army was formed in October of 2016 by Susan and Samuel Landis (center).

Susan Landis was standing in line for the deli counter in Kroger when her husband, Samuel came rushing to her, phone in hand, and informed her she needed to take a call.

Initially Susan, a social work major at NKU, was in disbelief; she asked if they were speaking to right person. They were.

The 29-year-old is one of the youngest to ever receive the award since its inception 49 years ago. Along with nine others, Susan now has the honor of being named one of the Cincinnati Enquirer’s and Greater Cincinnati Foundation’s Women of the Year. She’s the first Norse since 2006 to be honored, Rachel Votruba being the last.

A few days later Votruba gave her a call and some advice about the luncheon she’ll be honored at, along with the other women, on Oct. 23 at the Hyatt Regency in Cincinnati.

“I was saying ‘I’m nervous and I’m going to be one of the youngest ones there,’” Susan said. “And she said ‘just be yourself and don’t worry. It’s an honor.’”

Susan founded the organization Maslow’s Army with her husband Samuel in October of 2016. Every Sunday on Fountain Square starting at 1 p.m., they hand out over 700 pizza slices to the homeless community of Cincinnati, along with new clothes and shoes while offering free haircuts.

Narcan kits are on standby in case of a heroin overdose.

Starting from their tent on the sidewalk of Vine St., a line of in need people stretches around the corner of Vine and 5th St. On Sunday, Oct. 1, Susan said Maslow’s Army fed around 500 of Cincinnati’s most in-need citizens.

The Landis’s credit their success to their own personal experiences.

I remember just feeling like I had been beaten. I didn’t know how this could get any worse. And I guess I shouldn’t have said that, because it did get worse. ”

Since childhood, Susan said she has battled some form of depression and mental illness; she was diagnosed with bipolar disorder, which worsened her senior year of high school in 2007.

“The first part of my senior year, I was winning scholarships. I was putting in applications to NKU and looking at dorm rooms,” Susan said. “By the end of 2007, I was barely going to school.”

By 2008–in a period of mania– Susan was homeless. Though she grew up in a loving home, Susan’s parents could not help support her.

“When I ended up in the situation I was in, it wasn’t due to the fact I was unloved,” Susan said. “My family could just not do anything for me.”

She began using opioids as a way to self medicate and relieve symptoms of Bipolar. Samuel said that she formed her addiction when she was in her mania.

At the lowest point, Susan found herself in the back of the pickup truck in the middle of the night too exhausted to move out of a rain storm.

“I remember just feeling like I had been beaten,” Susan said. “I didn’t know how this could get any worse. And I guess I shouldn’t have said that, because it did get worse.”

A couple weeks later, Susan said she was restless, alone and uncomfortable. She accidently woke her now ex-husband after he’d been drinking with friends. She became a victim of physical abuse.

“He just started pounding me in the head. Another friend was laying in the back of the truck and he just laid there while I got pounded,” Susan said. “After it was over, I was just like, ‘this is horrible.’ That’s when I knew there is some mental illness here because I should not be living like this.”

The turning point came, Susan believes, when she became pregnant with her son. She knew she needed to get help.

“I knew I had to quit the drugs and quit the drinking,” Susan said. “I may have felt I wasn’t good enough. But I was good enough and that was not the life I wanted for my son.”

Samuel, much like Susan, had a place to call home and a family growing up. Born to upper-class parents, he was sent to several different boarding schools and was kicked out of his house at the age of 18.

“I didn’t know who I was. I was always being compared like ‘why can’t you be like this person and why can’t you be more like that person,’” Samuel said. “I didn’t have security there. When you are 18 and not knowing who you are and they put you out of the house, it’s a shock. I didn’t have any survival skills.”

For 20 years, Samuel lived in homeless camps, under bridges and found abandoned homes to stay in, sometimes getting arrested for trespassing. He adapted to the street life and learned how to lie, cheat and steal. He also used opioids as a way to escape from the reality of his situation.

“I just knew how hopeless my situation was,” Samuel said. “I was just waiting to die out there, really.”

There were times where Samuel would meet drug dealers and intentionally rip them off, hoping a bullet would find him in the process.

In one instance, Samuel says he was surrounded in an apartment building by six pistol-wielding dealers he had ripped off. Samuel opened the door of the apartment and leaped down three flights of steps as the dealers were firing at him from behind.

Several of those dealers, Samuel said, have come up to the Maslow’s Army tent and told him they don’t know how he escaped that night.

Samuel is now 30 months sober from drug and alcohol use and decided to quit smoking on Sept. 27.

Despite all of the hardship, Susan always had a dream to complete her education.

“In the back of my mind, I was always driven to get my education,” Susan said. “That was always a dream of mine. It was really hard at one point because I didn’t see any of these dreams coming to pass. They never went away, I was just struggling with my own demons.”

Susan attempted to go back to school in 2010, but was unable to keep up. In 2015, she enrolled at Gateway Community College and was able to begin the pursuit of that dream. In 2016, she and Samuel met in class at Gateway. By this time, Susan had developed severe social anxiety and would shake in public situations.

When they first started dating, they went to a buffet, where Samuel fetched food for Susan because she shook too much to hold a plate.

It didn’t take long, however, for the two to realize they needed to be together; they were married on June 13, 2016.

The Landises are now enrolled full time at NKU as social work majors. Susan has won two scholarships since she has arrived.

Prior to starting Maslow’s Army, Susan and Samuel were working at a mental health agency part time and felt like they were not being utilized appropriately.

“We weren’t able to use our personal experience,” Susan said. “We could only do one task at a time and we could only meet with [people] for an hour.”

Susan and Samuel talked about the idea of starting their own organization, which made her nervous at first.

“I’m like, ‘Honey, we are going to be the clients. We are going to end up homeless again,’” Susan said. “Let’s just work our jobs.”

With some encouragement from Samuel, she realized how her experiences could help those who in similar situations.

“The more I thought about it, the more I realized that I just can’t keep my personal experience to myself,” Susan said. “Sometimes you have to share your story in order to help the next person. Sam and I are both putting our lives out there for people to judge and pick apart, but there could be that one person out there that could really use it.”

The Landis’s were planning to buy a house prior to Oct. 2016; instead, they created Maslow’s Army.

“Knowing we weren’t going to get another paycheck for a year, we put all of our chips in one basket,” Samuel said. “We still live in a two bedroom apartment with a couple of cats. It’s really cramped, but we know this is going to be the new phase.”

They based their organization off Abraham Maslow’s Hierarchy of Needs theory. The theory states humans have five levels of needs; physiological, safety, love/belonging, self esteem, and self-actualization.

When describing her recent recognition as one of Cincinnati’s Women of the Year, she uses ‘we’ to describe who won the award.

“This has always been a team effort,” Susan says. “So when I win something or he gets a recognition, it’s both of us. We do it together.”