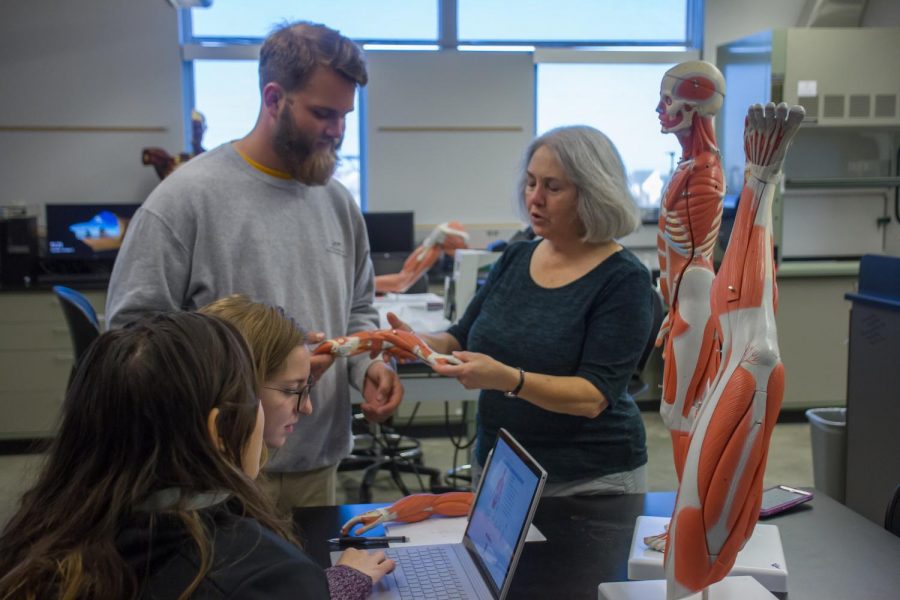 As a kid, you may have believed the myth that teachers lived at school. Scrolling through Facebook today, your professor may pop up under “people you may know.” Two worlds–business and personal–were once separate; in today’s technological world, social media links them together. The “line’ where communication should cease can be blurred.

“I don’t think that it’s appropriate when they are your student,” Crowley said. “So, afterward perhaps, if you had a positive relationship with that student and if they wanna keep in touch, or if you have something in common outside of school, then it’s okay.”

Crowley uses email and Blackboard to communicate with her students, saying that she also has the same stance on using social media. She stated that professors and students might develop a “mentor” relationship in college and that it would be appropriate to maintain communication after they graduate.

Crowley said that relationships between teachers and students in high school are formalized, whereas in college they are more “relaxed.”

Dr. John Alberti, English Department Chair, requires his students to use social media for some of his classes, including Writing in the Digital Age.

Alberti said he uses Facebook both as a recruitment tool for studying abroad and for his classes and are the only times he’ll send out friend requests to his students.

Alberti stated the importance of having “guidelines” for what is posted on social media. He said that because these sites have been around for awhile, people have become more comfortable with what they’re posting.

Using social media and texting students have been topics of discussion among faculty as the perception of texting has changed over the years, according to Alberti. He also said that when texting first became popular, the question of “who you should give your number to” was heavily debated.

“Phone numbers went from, you had one phone in your house–that was the only phone there was, so you gave your phone number to everybody,” Alberti said.  “That was the only way to reach you. And then, if you became a professional, you would have your office phone.”

According to Alberti, texting students is most beneficial when studying abroad or on other off-campus trips when communicating locations and times are necessary for the trip to function properly.

Alberti has found that when he does give his number out to students, they are very respectful and do not text him at unreasonable times. He stated that most of the time students use other modes of communication.

“The only text I received were sort of emergency texts, like ‘my car has a flat tire.’ One or two times someone was in a panic. They were stuck in an airport. They couldn’t get back to turn their paper in, or something like that,” Alberti said.

“My lab students absolutely have my cell and home phone number. Occasionally I will even give out my husband’s cell phone number,” Curran said, “This is critical. The experiments have to be done on time. If there’s a problem or an issue–we have laboratory mice–someone needs to be notified and take action quickly.”

Phone numbers went from, you had one phone in your house–that was the only phone there was, so you gave your phone number to everybody.”

Curran relies on emailing her non-lab students, making announcements in class and using Blackboard as means of communication with students. She can easily email all her students using Blackboard with “the click of a button.”

“For a large class, I try to use the technology that’s available within the course-ware. For every class, we have a discussion board section that says ‘general course questions.’ This was particularly helpful for large lecture classes,” Curran said.

Students can create a thread with a question. Instead of answering a question multiple times, she can answer it for all student to respond, Curran explained.

“Many students will not ask in class. They don’t want to show that they’re confused,” Curran stated.

Curran said that the importance of social media isn’t as vital while she currently has students, and added that it’s important for students to be able to interact with their professor in a way social media can’t suffice.

“After they graduate, you find them on LinkedIn. So if I want to know what my former lab students are doing, I can pop on there and figure out what their latest job title is,” Curran said.

She said there needs to be a line of demarcation when communicating with students through texting or social media. She said that there should not be an introduction of bias, as all students should be evaluated fairly.

“If you look at how social media is used or misused, all the things they tell you not to talk about– in terms of politics and religion– you tend to show more biases on personal social media sites,” Curran said. “And that could really discourage the type of communication you would want to have with your students.”

Alberti said that faculty-student friendship on social media can create problems in the classroom due to the authority a professor can have over a student.

“So I kind of feel that–my own understanding–that’s a power dynamic. It could make somebody feel uncomfortable, from my perspective, if one of their faculty members asked to friend you,” Alberti said.

This could be an issue for any figure of power, not just professors, Alberti said, adding that it might be fraught to decline a friend request from a professor you are currently in a class with.

Even with the occasional negative effects of technology, he said he believes technology is beneficial. Alberti also noted that technology allows barriers involving communication to be broken down.

“I think, actually, it’s a good thing because it’s rapidly expanded possibilities for communication. It has helped democratize communication,” Alberti said. “We can now communicate with people all over the world, instantly.”