BLOCKED: When you can’t view the president’s tweets 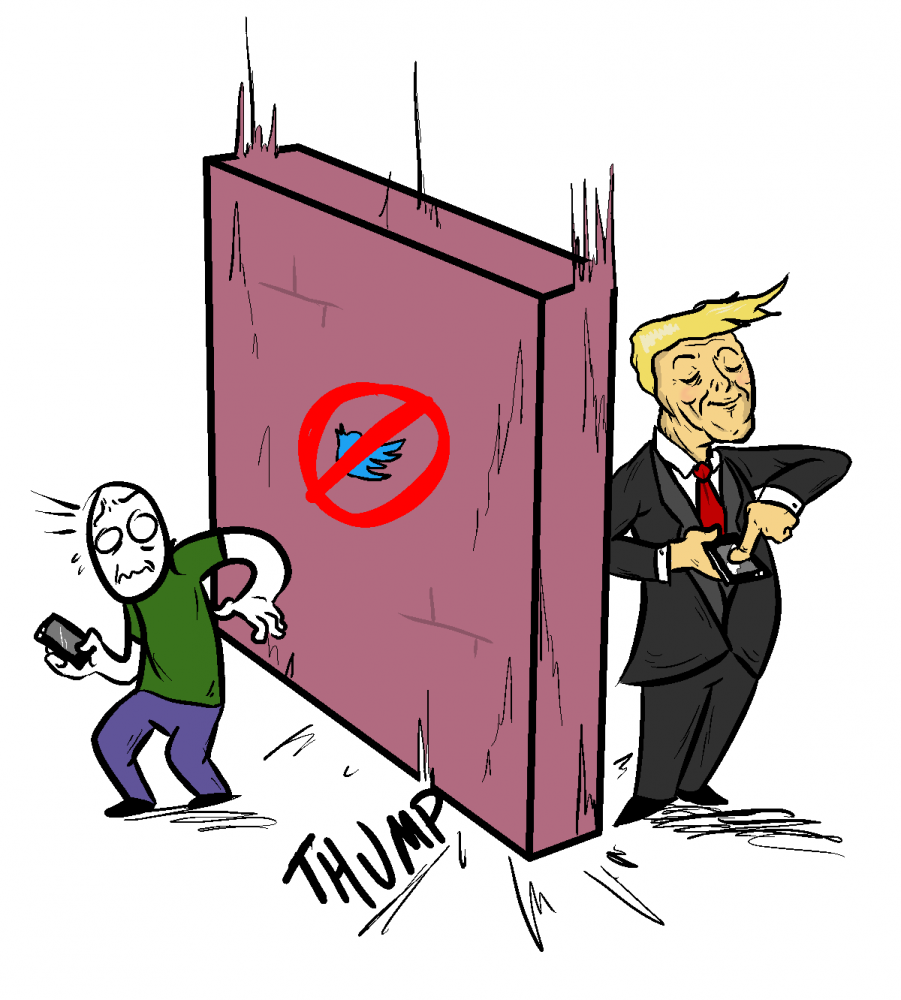 A defining characteristic of our newest president is his willingness to reach for Twitter, no matter the occasion. Millions flock to @RealDonaldTrump to hear his thoughts on public policy and current events, and the Twitter handle is often the first place the president turns to when he makes announcements.

Most recently, Trump turned to Twitter to announce his “Transgender Ban” long before the news was officially announced–or even finalized.

The president’s soft spot for his social media account has caused controversy, however, as he used it to block hundreds of users from seeing his tweets. Seven of these Twitter users have already sued Trump on the basis that their free speech rights had been violated.

“The tweet said something like, ‘Maybe if you would focus more on making peace with other countries instead of building up our military, you wouldn’t have to make these stupid policies,’” Johnston said. “Within 10 minutes, I got a notification from Twitter saying I had been blocked, and my tweet had been deleted for breaking their harassment policies.”

Not only was Johnston blocked from seeing the president’s tweets, but his Twitter account was eventually removed altogether.

“It was only followed by like 200 people, so I thought, it’s not that big of a deal,” Johnston said. “But I tried to log in a month later and I got a notification that it had been taken down.”

….Transgender individuals to serve in any capacity in the U.S. Military. Our military must be focused on decisive and overwhelming…..

He contacted Twitter’s support services, but representatives of the social sharing site say there is no way for them to reactivate the account. According to Johnston, he was confused by the company’s decision because of tweets he’s seen by other users directed at the president that appeared to be more malicious.

“Some people have tweeted death threats and their accounts are still active,” Johnston said. “I tweet a disagreement with a policy, and my account is deleted for harassment.”

He felt that, by Trump blocking those who disagreed with his policies, the president was shutting down an important dialogue.

“If he’s not going to hold a press conference, and he’s just going to tweet out things like that, you need to have dialogue from both sides,” Johnston said. “I feel like it’s hindering their free speech just because they do have the right to discuss what he’s doing.”

This is the same argument shared by those who have sued the president over the blocking of their tweets. According to NKU law professor Ken Katkin, however, those arguments don’t hold much validity because Twitter isn’t a public forum.

“So much of the internet is people interacting through privately owned companies and cables, so first amendment rights sometimes function differently than people think,” Katkin said. “Twitter functions in some ways like a public forum because anyone can say what they want and it’s unmediated, but really, the difference is, it’s a private platform.”

Because Twitter is a private company, the first amendment rights lie within the company itself, and not with the users, and they have a right to lay the ground rules on the way their users should behave. This information is found within the site’s terms and conditions which every user must agree to before making an account.

“Let’s say you invite a friend over to your house. They show up, and they insist on holding up a sign that says something. You could say, ‘Take that sign down. You’re in my house,’” Katkin said. “They could say, ‘Well, I have first amendment rights,’ and you could say, ‘Not right here, you don’t.’ I think that’s a way you could think about this. It’s their platform.”

Twitter has placed no terms or conditions on the usage of its website by the president, so Trump is technically under the same obligations as the average citizen, who has the ability to block or delete comments they don’t want to be associated with their page. Some think this raises more concerns, and that he should be held to a higher standard because of his government affiliation.

“I think Twitter as a company just runs the accounts. It should be more of a government issue because he’s tweeting out policy changes and announcements from his personal account,” Johnston said. “He shouldn’t be allowed to block anyone on Twitter.”

According to Katkin, the president gets this right from the Government Speech Doctrine in the first amendment, regardless of whether he tweets from his personal account or the official @POTUS account.

According to Johnston, he doesn’t have an issue with being blocked by the president, but that he feels cut off from the news, as Trump’s Twitter is usually the first place to find out about policy changes.

“I mean, you can read about it in the newspaper, but I was getting account notifications so I could get them right to my phone to know when Trump was tweeting as it was happening,” Johnston said. “Now, I have to wait about an hour and a half for any news station to write about it. I don’t get the immediate notifications anymore.”

Johnston previously had two separate accounts: one personal and one political. He wanted to keep those two parts of his life separate, and recognized that some people wanted to avoid politics on the internet.

In this case, however, the personal is becoming political as he’s now having to use his personal Twitter account to stay involved in the political conversation.

“Luckily, my personal account hasn’t been blocked by him yet. I’m trying to just not tweet him because I’m afraid my account will get deleted,” Johnston said. “I’ve delayed even following him on Twitter and just wait for other people to retweet stuff because I can’t afford to get blocked again and not be able to see what’s going on.”

Katkin can see where that might cause concern, but still doesn’t think there are legal implications to the blocking of users.

“If it was a true public website, I think that may present a legal issue because of statutes that require the public to have access to government information that’s not confidential,” Katkin said. “However, because it’s Twitter, I don’t think so.”

There are some potential legality issues that  Katkin can see coming out of the president’s usage of social media, but they lie in the Presidential Records Act, and not in the first amendment.

There are also potential issues with the legality of the decisions that Trump claims to be making via his Twitter account, like in the instance of the Transgender ban.

“Sometimes, in his tweets, he’s purported to make actual legal decisions. The statutes that govern the military have a procedure that has to be followed for the commander-in-chief to carry out military orders,” Katkin said. “When Trump announced that on Twitter, that had no legal status.”

According to Johnston, that answer isn’t simply black and white but lies in Trump making the distinction between his personal account and the official @POTUS account.

According to Katkin, while he thinks the president’s seeming attempt to suppress certain criticisms of himself is surprising and his usage of Twitter at all is questionable, ultimately, if Trump chooses to tweet, he has a right to do so as he pleases.

“There’s plenty of opportunities that people have to criticize the president through venues that are available for that purpose. So, it’s not so much that anyone’s message is really being censored here,” Katkin said. “It’s just that, there’s one path, one venue for speech that is operated by a private company and used by a president the same as anyone else. Ultimately, Twitter is not a public forum, and the president is allowed to have a measure of his own speech.”