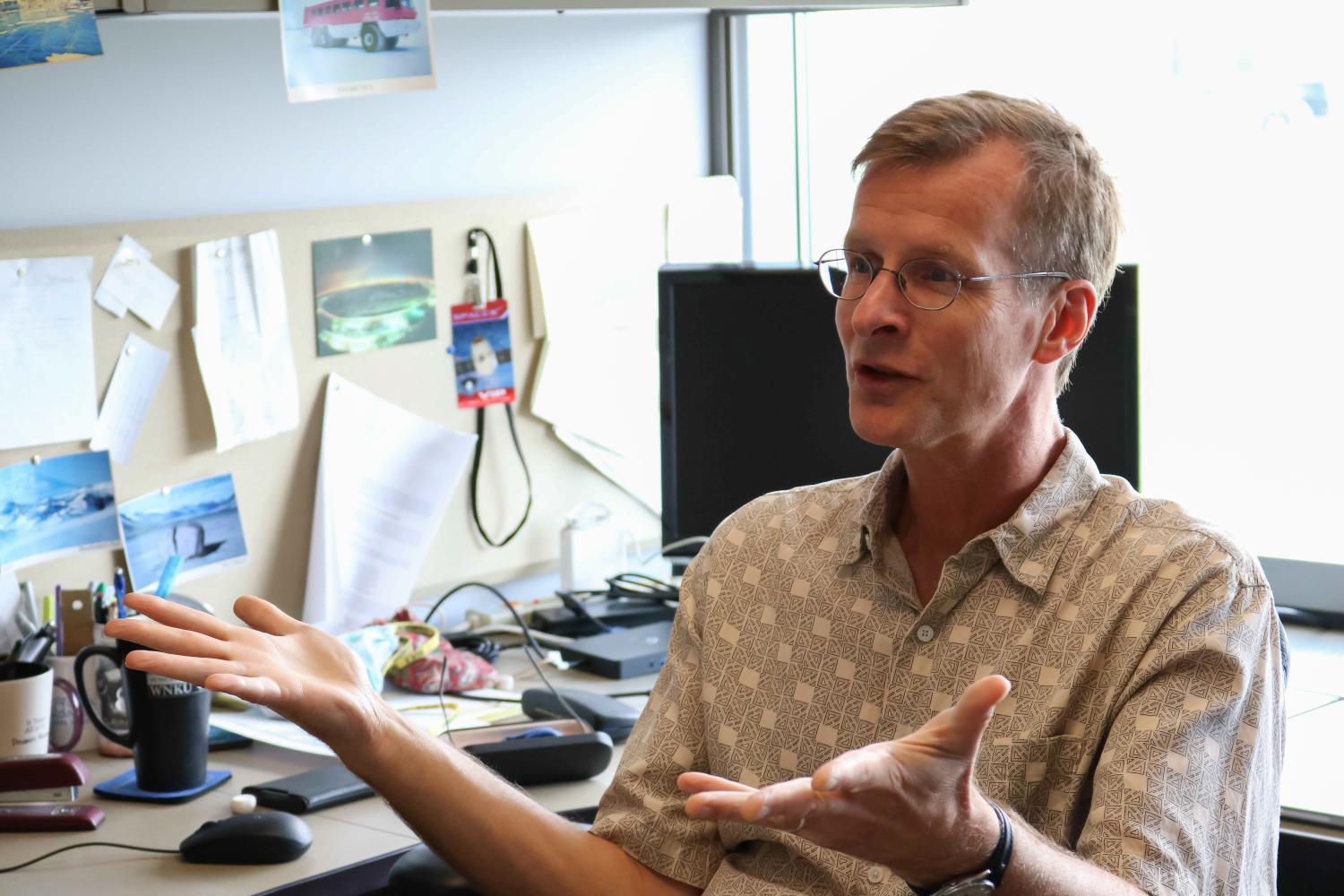 It was on that day that the ISS-CREAM, an experiment that Nutter and an international team of researchers started seven years ago, was launched into space via rocket. Eight days later, the instrument began sending its data back to Earth, where the information will help astrophysicists discover the origins of cosmic rays.

“It’s absolutely wonderful to have something in space,” Nutter said, reminiscing on the day of the launch. “It’s a rare privilege.”

The ISS-CREAM, which stands for International Space Station — Cosmic Ray Energetics and Mass, is a device that consists of five particle detectors tasked with determining exactly where “cosmic rain” — a steady stream of fast-moving electrons and atomic nuclei from outside our solar system — originates.

“Just like astronomers use light to get information about what’s going on outside the solar system, I use particles,” Nutter said. “They’re accelerated, we think mostly in expanding supernova remnants — not the original explosion of the supernova itself, but in the shockwave it creates as it moves outward.”

According to Nutter, these findings will help researchers find out whether these supernovae supply the bulk of cosmic ray particles, what material the rays formed from and what their history is within the context of the galaxy.

“Supernovae are tremendously powerful,” Nutter said, “and all that energy is slowly distributed out, just like the energy of a bomb. Cosmic rays are just a part of this dissipating energy, but they’re a significant amount of it.

Prior to the ISS-CREAM’s launch, the instrument, which Nutter says is the size of a household refrigerator and weighs almost 3000 lbs., made seven flights by a football-stadium sized balloon above Antarctica to collect data.

“When we’re in a balloon, we’re above 99.9% of the atmosphere,” Nutter said. “Some of the particles will interact in the atmosphere, so we’re limited as to how perfect our measurements can be by that interaction fraction.”

Aboard the International Space Station, Nutter says, the lack of this interaction makes for more precise measurements. It also circumvents a balloon’s limitations.

“A helium balloon will eventually run out of helium and come down,” Nutter said. “The record that CREAM had was about 40-something days. The overall record’s 50-something. We’ll spend three years on the space station. We’ll be able to really refine our measurements and we’ll be able to make some statements about energies that aren’t available to us on balloons.”

“They’ll point us towards new questions to ask,” Nutter said.

His role in the project is two-fold: he’s the lead simulations expert, creating virtual versions of the ISS-CREAM in software and predicting how it might perceive different particles while keeping up the hardware in one of the device’s five detectors.

Nutter “fell in” to cosmic rays as a grad student. He knew he had an interest in particle physics, but it was a professor’s recommendation that led him into his current field.

“He said, ‘you want to check out this little experiment?’ and I really liked working on it,” Nutter said. “These particle physics experiments were small — Volkswagen bus sized — and you could be involved with and make a difference in every aspect of it. On a very large experiment you’d find in Fermi Labs or CERN, there are hundreds, if not thousands, of people on it. You’re focused on your tiny piece of that.”

It’s being able to work with a small group that Nutter finds so enjoyable. That same concept makes NKU an ideal place for him to teach.

“First of all, I like working with the undergraduates,” Nutter said. “The other thing is that NKU’s been very supportive of my unique needs. When we want to do a launch, especially in Antarctica, I’ll have to disappear for a month or two. My colleagues have stepped in and taught my classes for me and made it possible for me to go. Not every place will let you do that.”

He sees NKU as a school that’s small, but big: small enough that the faculty feels like a family, but big enough that everyone can spread the workload.

Looking back on his career, Nutter has seen his work rise from the Antarctic ice sheet to the outer atmosphere and, finally, to outer space.