Professors working to include sexual misconduct policy in syllabi 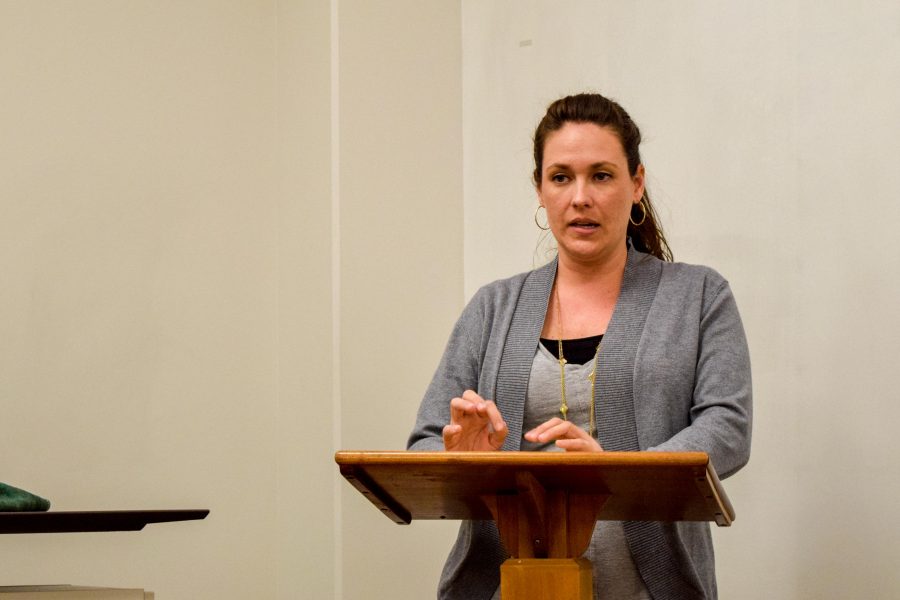 Dr. Kratzer is one of three professors to work on putting a sexual misconduct policy in their syllabus.

During Dr. Jessica Kratzer’s first year as a professor at NKU, she’s had students disclose personal experiences such as anxiety, depression, and sexual assault.

Kratzer is one of three professors at Northern Kentucky University in the process of writing a new sexual misconduct policy to include in their syllabi.

The policy was created by Dr. Kratzer, Dr. Caroline Macke, and Dr. Amanda Brown, who are all on the Coordinated Community Response Team.

Kratzer added a rough draft of the new sexual misconduct policy to her syllabi for her communication classes.

* This is the rough copy of the Sexual Misconduct policy. *

o   As an instructor, one of my responsibilities is to help create a safe learning environment on our campus.  I also have a mandatory reporting responsibility related to my role as a faculty. I am required to report to the university if a student shares information regarding sexual misconduct or information about a crime that may have occurred on NKU’s campus or with an NKU student.

o   To make a non-confidential report of your experience with sexual misconduct, you can contact:

o   If you would like to talk with someone confidentially about your experiences and about getting support/services, you can contact:

“As a faculty member, putting this in there says I recognize that some of you are dealing with this stuff, or may deal with it, and here are some ways to get help,” said Kratzer.

While creating an accepting and welcoming environment in her classroom, Kratzer has to frequently remind students of the obligation that she has as an employee of NKU.

“Faculty are not confidential people. If someone tells me that they have been assaulted, I am required to report that up the chain, and students don’t know that,” Kratzer said. “I just want you [the students] to know that if it’s related to a certain topic, I have to report it.”

Suicidal thoughts and sexual assault are to be reported up the chain to Ann James (the Deputy Title IX Coordinator for students) and Gabby Dralle (Director of the Norse Violence Prevention Center).

The Norse Violence Prevention Center is a confidential and a non-reporting office and they serve as advocates for the survivors.

Dralle has the ability to remain confidential and she does not have to report the sexual assault to anyone else unless the survivor wants it to be reported.

“Since we’ve opened we have seen a steady increase of students coming to us,” Dralle said. “What I want is for NKU to be a leader in that. I want NKU to be a model university and I think that we are well on our way.”

According to James, a continued education of the reporting process would be beneficial for faculty, staff and students.

“We have come a long way with educating our students about bystander intervention. About how to report and what the resources are,” said James. “Our reporting has gone up which I see as a positive.”

However, James does have students visiting her office for things other than filing reports.

As a professor for another class on campus, James said that it might be helpful for other professors to include this new policy in their syllabi, especially if they teach classes that might trigger thoughts and emotions surrounding sexual assault.

The new policy would remind students that the professors have to report the incidents, and also where to go if the students need additional help and resources.

Brittany Murphy, a fifth-year student at NKU, noticed the policy in Kratzer’s syllabus and remembers leaning over to her friend in the class and being slightly shocked that Dr. Kratzer was talking about the resources that are on campus.

“Building that connection between classrooms and the offices helps us to know more about them,” Murphy said.

Murphy thinks that it is helpful for the syllabus to have resources listed for sexual assault because not everyone knows who are confidential and where other students can go for help.

“I think that having it in there as an easy access would be beneficial, even if it’s not used until weeks or months after the syllabus is given out,” said Murphy. “I think that’s a good reference point that people can go back to and look at if they need it.”

Thus far, Kratzer has had a positive response from the professors who have read the sexual misconduct policy, as well as positivity from students.

“I think that it creates a nice discussion in class.” Kratzer said. “By not talking about it, it doesn’t help the issue.”