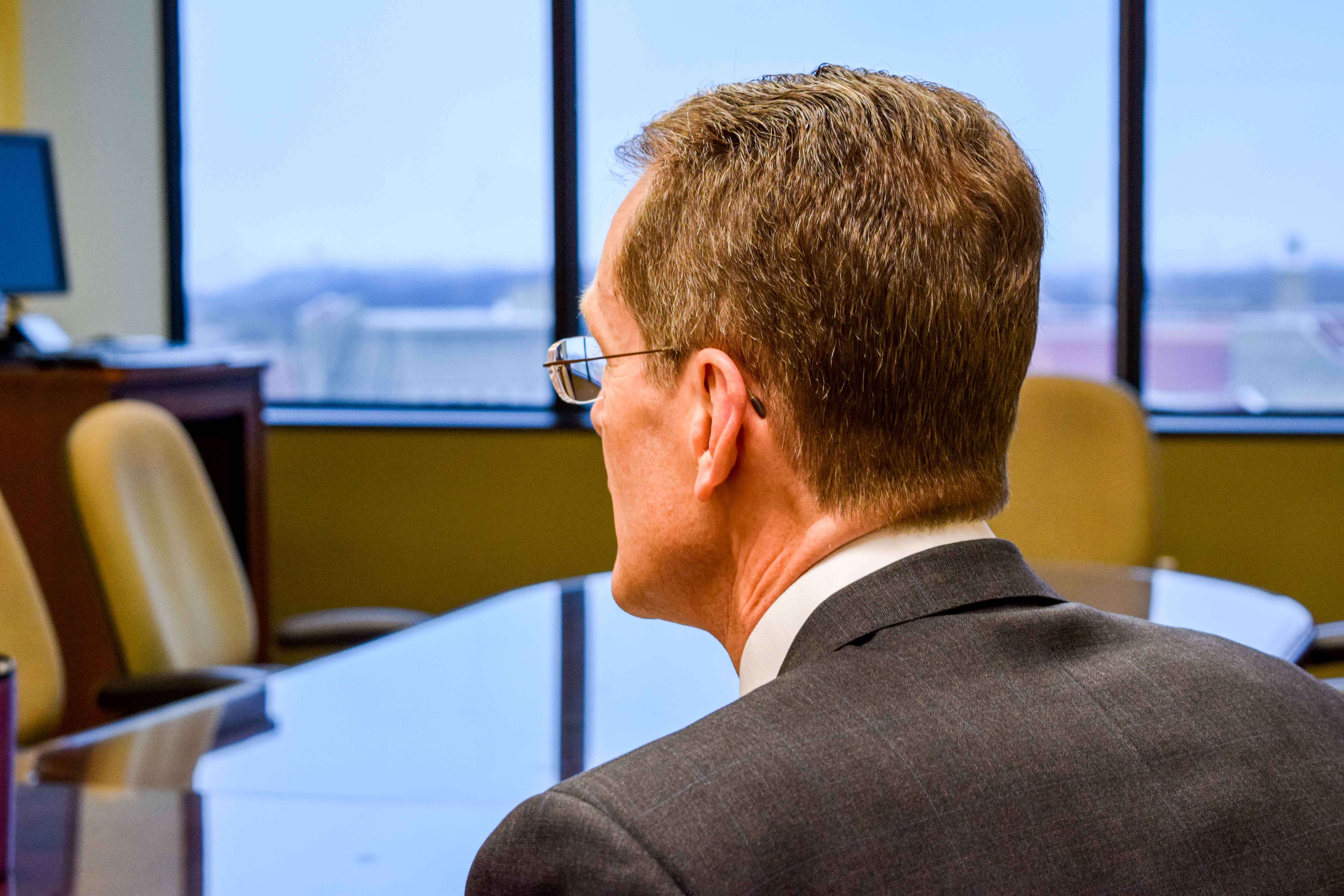 Looking back while moving forward: A Farewell from Mearns

Sitting at the edge of a round conference table, overlooking the skyline of Cincinnati, President Geoffrey Mearns began his farewell.

“As I sit here, will I be ready to say goodbye? I am not sure,” Mearns said.  “I thought people would say ‘Good, we are ready for you to go,’ but people have been understanding and supportive.”

Serving as NKU’s President until the end of the Spring Commencement on May 7, Mearns will begin his journey at Ball State at the beginning of August.

Mearns said the most gratifying part of his job serving NKU came from the support of the greater university community.

“Taking on president wasn’t about me, it was about playing a role in helping people realize their ambitions and their dreams,” Mearns said.

Over the course of four years, Mearns reflected on some of his biggest highlights: when he was announced president of NKU, taking NKU to Division I, fighting for Outcome-based Funding, and partnering with the University of Kentucky and St. Elizabeth Healthcare.

“I remember it all clearly,” Mearns said. “My appointment was announced and I never felt so welcomed.”

Mearns said his presidency was announced in Greaves Hall, April 2012. He said the support of his wife and children meant most to him, along with the enthusiasm from everyone who embraced them.

Mearns said serving as the president for a large and complex university like NKU was a big success in his life. He said he came to NKU with the plan to meet people and learn from them.

“I think one of the tremendously gratifying parts of this job is the people that support you,” Mearns said. “It’s a hard job, but to know that [not only with] your efforts, but with the efforts of a large team you can make big changes.”

Within the first few months of Mearns’ time, a survey was sent to all students, alumni, faculty, staff and the outside community. Receiving feedback, Mearns said it was the first time he was impressed with the passion and pride within the institution.

“NKU is full of pride,” Mearns said. “We are an institution I am proud of.”

NKU goes to Division I

“Sports is not a substitute for the academic programs,” Mearns said. “It’s a reflection of it.”

Mearns said without the help of his leadership team and others behind him, he wouldn’t have been able to get NKU into Division I alone.

“We were in good shape, but we had a lot of work to do,” Mearns said. “The NCAA doesn’t make the process easy, so we had to work hard.”

Mearns said looking back, over the past five years, NKU student-athletes strive for academic success more than ever. Last fall, the GPA average of student-athletes reached 3.2, the highest it has ever been in the history of NKU.

“This demonstrates the confidence this campus has to push ourselves and know we could compete in a higher level division,” Mearns said.

Mearns believes NKU is a Division I school because of the quality of students, staff, faculty, and programs that make up the university. He said it is humbling to watch students compete and succeed in both athletics and in the classroom.

“To see this is just confirmation we have been a national institution for many, many years,” Mearns said.

Feeling frustrated with funding, Mearns didn’t appreciate the large disparity between universities and the impact it was having on NKU’s capacity to grow and support students.

Mearns said it took him a year to fully grasp the nature of the challenge he would face to understand the responsibility leading an effort to have a voice for funding. On behalf of students and the fairness for funding rights for students across the Commonwealth of Kentucky, he was determined to do so.

Formerly a trial lawyer for 15 years, Mearns was dedicated to advocating for higher education funding in Northern Kentucky.

“It was challenging,” Mearns said. “I think what made us so successful was being more aggressive and vocal.”

Mearns said he thinks the real secret to their success was mobilizing the university community and the broader Northern Kentucky community to support their efforts.

After launching the campaign in January 2016, Mearns said a performer sang “Make Them Hear You,” which became the rallying cry for the whole university to stand with them.

Winning 50 percent of funding disparity beginning in 2018, Mearns said he can leave knowing students in the Commonwealth of Kentucky will have funding rights. He said even though some people thought it wasn’t possible to conquer in the campaign, the push to fight for it was worth it.

“Of course there were times where I thought maybe we wouldn’t be successful and times I felt frustrated and maybe a bit angry,” Mearns said. “I know sometimes people think some things aren’t possible, they need to be persistent and courageous and that’s what the university community was doing.”

With a lasting impact on students beyond graduation, Mearns said the biggest achievement was the financial benefit the university will receive. He said he hopes the effort will inspire students to take on similar challenges in their own lives and careers.

“With hard work, determination, and a sense of optimism, things are possible,” Mearns said.

Saving the helmet from the 2015 Groundbreaking introductions, Mearns is saddened he won’t be able to introduce the Health Innovation Center in 2018.

“It was a warm day and everyone was there and happy,” Mearns said. “Maybe they will let me come back and sit in the back for the opening.”

Making plans to build the Health Innovation Center wasn’t the easiest. Mearns said he took a tour of the building last week and was stunned with how far it has passed his expectations and imagination.

“I have mixed emotions,” Mearns said. “It is gratifying to see a building take shape, but sad knowing I won’t be here when it’s completed.”

Mearns said the Health Innovation Center gives him a sense of peace knowing students, faculty, and staff will be able to be transformative in their professional careers and how they serve the health of the population around NKU.

“It makes me proud,” Mearns said. “The people who will be working and studying in the building will do great things. We’re here to gather the knowledge and skills for when we graduate to advance our families and our communities.”

Never giving up on higher education, Mearns found more ways for NKU to compete and partner with surrounding institutions.

“When I think of the future of higher education and I think of Northern Kentucky as a leader for partnering with others,” Mearns said.

Mearns said partnering with other institutions has been for the best interest not only in those two institutions but fundamentally in the best interest of the students. He said the University of Kentucky greeted NKU as an equal partner in the endeavor, reflecting the respect that NKU has earned in the state and in our region.

“What was humbling to me was how easy it was,” Mearns said. “Two conversations to say that we are going to do this.”

Also partnering with St. Elizabeth, Mearns said it only took two conversations for everyone to agree. In addition, the University of Cincinnati playing on NKU’s campus and UK joining to create a branch of their medical school here.

“This is further confirmation that our institution is strong, that people respect us, and that it is deserving of people of real pride,” Mearns said.