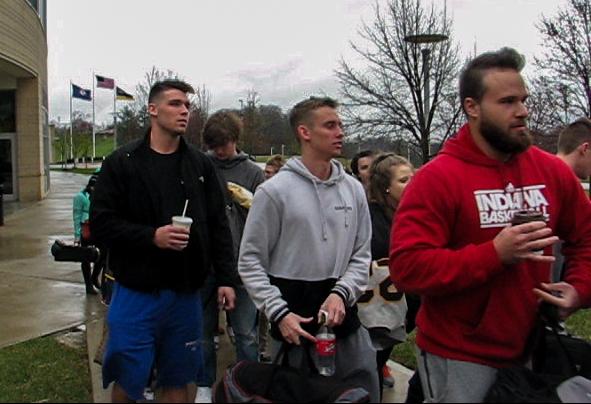 Gallery|7 Photos
Brittney Gunter
NKU students board buses this morning to go to Detroit for the Horizon League championship game.

The rain on Tuesday morning did not prevent 64 Northern Kentucky University students and alumni from going to Detroit for the game that could make history for the NKU Norse.

The NKU men’s basketball team will play Milwaukee in the Horizon League championship at 7 p.m. tonight at Joe Louis Arena. Lily McDonough, a junior at NKU, is excited to be making the trip.

“I think that it’s really exciting because it’s our first year that we are actually eligible to be in the NCAA and we’re so close,” McDonough said.

NKU student Matthew Reif is looking forward to the game tonight, hoping to cheer the Norse on to victory.

“I’m really excited for the players themselves, because they’ve gone through a couple of coaches in the past couple of years, and we’ve been slowly getting our way up there,” Reif said.

Related: In year one, NKU 40 minutes from NCAA berth

Seth Stone, a senior at NKU, hopes the Norse will not only win tonight, but be placed in the bracket in a location close enough to drive to see them in the NCAA tournament.

“If they win tonight, I want to go to Indianapolis and watch them again,” Stone said.

Stone hopes that this will help NKU to have a larger student fan base for next year regardless of the outcome.

“It shouldn’t have taken us to get to the tournament for people to start taking an interest,” Stone said. “Hopefully we will have better tailgates, better student sections and a better fan base after this.”

If the men’s basketball team wins tonight they will earn the Horizon League’s automatic bid into the NCAA tournament. They would then have to wait until Sunday to find out where and when they will open the tournament.