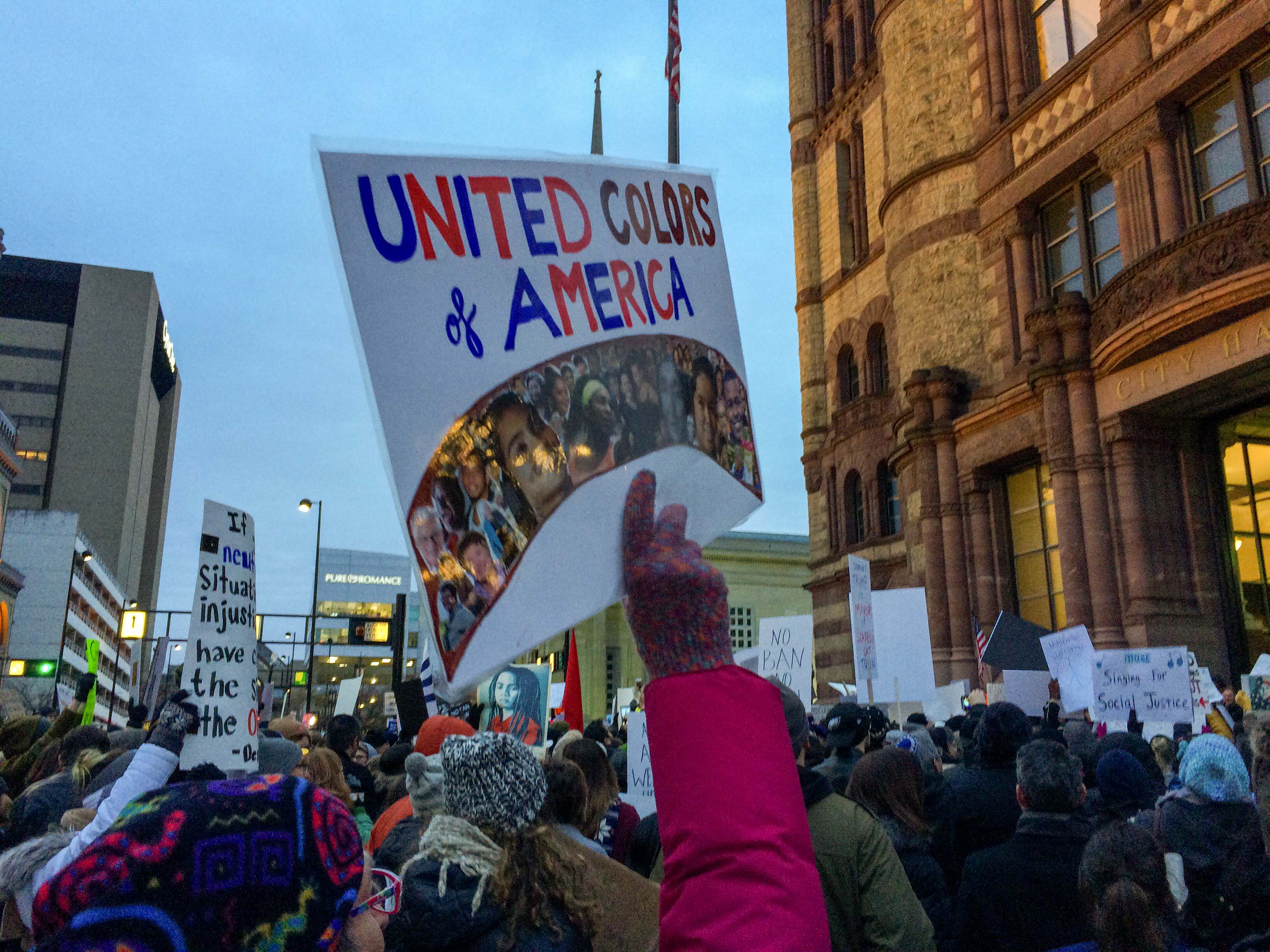 Mayor: Cincinnati will continue to be sanctuary city

Among the demonstrators were NKU students that whether personally affected or not, showed up to the Rally for Refugees and Muslims, both tempered with frustration and bound by unity.

Colorful posters and flags stood tall in front of City Hall as demonstrators gathered at its steps. Their chanting drowned out the noise of the traffic on Plum Street, and a megaphone on the steps of the hall crackled, “This is not a movement people can afford to walk away from.”

The man brandishing the megaphone was Joe Sack, whose group Refute and Rally organized the Rally for Refugees and Muslims.

According to its Facebook page, the goal of the group’s rally was to show “support and solidarity for our immigrant family, friends, and neighbors by utilizing the power of peaceful democratic assembly and our right to demand action from our elected officials.”

During Monday evening’s protest, Cincinnati Mayor John Cranley appeared and continued to vocalize his support for Cincinnati as a “sanctuary city,” or a city which shelters illegal immigrants.

Standing beside protesters, Cranley said that the U.S. faces a “national moral crisis” while he also called for unity.

“We as a city stand with immigrants, we stand with refugees,” said Cranley. “We have been and will continue to be a sanctuary city.”

Specifically noted on its petition, Refute and Rally demanded action that includes an official rejection of the ban in Cincinnati, designation for the city as a sanctuary city and funding for an Immigrant Welcome Center, something that Cranley proposed in October 2015.

In front of the crowd, NKU communications major Sami Dada stood up and shared his story of immigrating to America from Liberia. He said he came to this event out of “an overwhelming need” to support his immigrant and Muslim community.

“I couldn’t be silent while some of our fellow students are being directly impacted by this ban, Dada said. “It’s not fair for us to close the door on people in need who are just seeking safety and a better life.”

NKU senior Spanish major Francesca Phillis said she came to the rally to support refugees. Phillis said her feelings about the refugee ban are deeply personal because her best friend is a refugee that escaped Cambodia’s Khmer Rouge.

“One of my friends watched her father be executed in front of her when she was little,” Phillis said. “If it wasn’t for the United States allowing Cambodians into the U.S., I wouldn’t have my best friend.”

For Christina Caffrey, a freshman pre-law student at NKU, the issue of refugees coming to America is rooted in her own family’s history; one of her parents is Muslim, and her stepfather escaped Iraq under the rule of Saddam Hussein.

Young people from around the tristate showed up to protest. A Xavier University freshman led chants through the megaphone on the hall’s stairs. University of Cincinnati students held signs and applauded speakers. A Walnut Hills High School junior stood up to recite the Emma Lazarus poem inscribed on the base of the Statue of Liberty.

James Schindler, an NKU computer science major, said he came to the rally because he is dissatisfied with the president’s executive order. Schindler said it is “unheard of that [President Trump] would make this actually happen.”

UC political science major Caroline Lembright shared this frustration. She said the reason she came to the rally was to send government representatives a message.

“This ban does not represent who we are as a nation or as a city,” Lembright said. “If you’re not outraged, you’re not paying attention.”

President Trump signed the executive order on Jan. 27 which temporarily bans refugees from seven countries with high Muslim populations as well as halting the entry of Syrian refugees indefinitely. Iran, Iraq, Libya, Somalia, Sudan, Syria and Yemen are all named in the ban, and the order suspends the entry of refugees from those countries for 90 days. All refugee admissions are also suspended for 120 days.

The weekend brought reports of people being detained in airports while trying to re-enter the USA. Protests and shows of solidarity appeared in cities and airports across the country, including protests at CVG Airport and the one held Monday at Cincinnati’s City Hall.

As the crowds dispersed and city police reopened the block to traffic, Sack said it was “amazing” that so many students got involved and was “really surprised by the huge turnout” of young people.

Caffrey said the protest gave her hope in spite of her family’s uncertain future.

“It’s good to know that even though there are many people that agree with this executive order, there are people that still see the good in Muslims and immigrants in general,” Caffrey said.