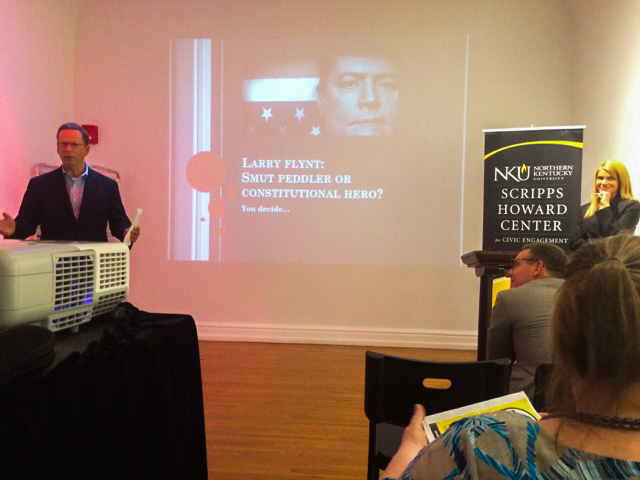 The first in a series of lectures, Six at Six began with a lecture entitled “Larry Flynt: Smut Peddler or Constitutional Hero?” The event was held at the Carnegie in Covington.

A wall usually reserved for fine art was ornamented with sexually-explicit material; a cover for Hustler magazine, depicting a woman falling headfirst into a meat grinder.

The reaction to the image projected on the wall of the Carnegie’s Duveneck Room on Wednesday night was strong.

The cover read, “‘We will no longer hang up women like pieces of meat.’ – Larry Flynt.”

This year’s series of NKU’s Six@Six lectures began at the Carnegie in Covington with a discussion titled “Larry Flynt: Smut Peddler or Constitutional Hero?”

Presented by Jennifer Kinsley, associate professor and director of Experiential Learning at Chase College of Law, the Six@Six series is six community lectures sponsored by NKU’s Scripps Howard Center for Civic Engagement and hosted at locations around Greater Cincinnati.

Kinsley has years of experience working on freedom of speech lawsuits, and has been listed in the Best Lawyers in America specifically for First Amendment law.

The lecture was a breakdown of the life and lawsuits of Flynt. Kinsley began the talk with a warning.

These images included photos of Flynt donning a diaper fashioned out of the American flag, Flynt wearing a tee shirt calling out the U.S. Supreme Court for using explicit language and the meat grinder Hustler cover.

Flynt owned adult clubs throughout Ohio, including the Hollywood Hustler club and Hustler store in downtown Cincinnati. He founded Larry Flynt Publications with brother Jimmy in 1976, which is most famous for distributing pornographic magazine Hustler.

He was involved in many famous lawsuits facing Hamilton County former prosecutor and judge Simon Leis, who himself is an alumnus of Chase College of Law..

In 1978, Flynt was shot while entering a Georgia courthouse, leaving him paralyzed from the waist- down. He is also the subject of the Oscar-nominated 1996 film, “The People v. Larry Flynt” and is famous for his outlandish courtroom behavior. To this date, he is still in legal battles over his enterprises.

Kinsley discussed the “boundaries” Flynt sometimes crossed due to the nature of his business.

“If the First Amendment says anything,” Kinsley said, “it says we can go into those boundaries.”

During the lecture, Kinsley also offered her firsthand experiences on her first jury trial, in which she defended a woman accused of selling obscene material. “Which we won,” she added with a smile.

In the end she said the Flynt cases have had a large impact, but she remembers the words of Sirkin: “It’s like a pendulum. We self-correct ourselves over time, so if things go too far one way, forces pull the pendulum back.”

Her opinion on Flynt is one of restrained respect.

“I think people who fight hard battles are people that I respect, so this is a man I respect,” Kinsley said. “Although I definitely don’t agree with his tactics and I don’t like the way he makes fun of people.”

Mark Neikirk, executive director of the Scripps Howard Center for Civic Engagement, is excited to bring these lectures to the community as a part of a community-wide conversation.

“We have a fabulous season this year,” Neikirk said in his introduction, “and about three or four years ago, we added students to the mix, so you’ll see three lectures by faculty members and three by students.”

Carnegie Executive Director Katie Brass was happy to host another Six@Six lecture, which is in its seventh year.

“The Carnegie has been a part of it since the beginning,” Brass said. “We have a really tight relationship with Northern. For me, it was just a natural fit to do the lecture series here.”

Brass said she comes from a Mapplethorpe background, and although she doesn’t necessarily like Flynt, she respects his right to free speech.

“Do I like what Flynt is selling? No, and I don’t have to go buy it,” Brass said- “And to me, I think he had absolutely every right to fight for it.”

Mike Williamson, former assistant of the Campbell County attorney’s office, has worked on obscenity cases within the county. A Chase graduate, Williamson also received a history degree from NKU in 2005. He has helped prosecute strip bars, prostitution and adult bookstores.

“There was a period of time throughout the 1980s where we prosecuted strip bars, prostitution, adult bookstores.”

After the lecture, he commented, “When I think of hero, I think of someone who risks it all to accomplish something,” Williamson said.. “But he certainly did challenge authority.”

This series of Six@Six lectures will continue through April 2017.
The topic of the next lecture is “Privacy and Risk in the Digital Age,” presented by NKU computer science senior Nathaniel Hudson, and it will take place Oct. 27 at the Campbell County Public Library.