Scholars reflect on their experiences 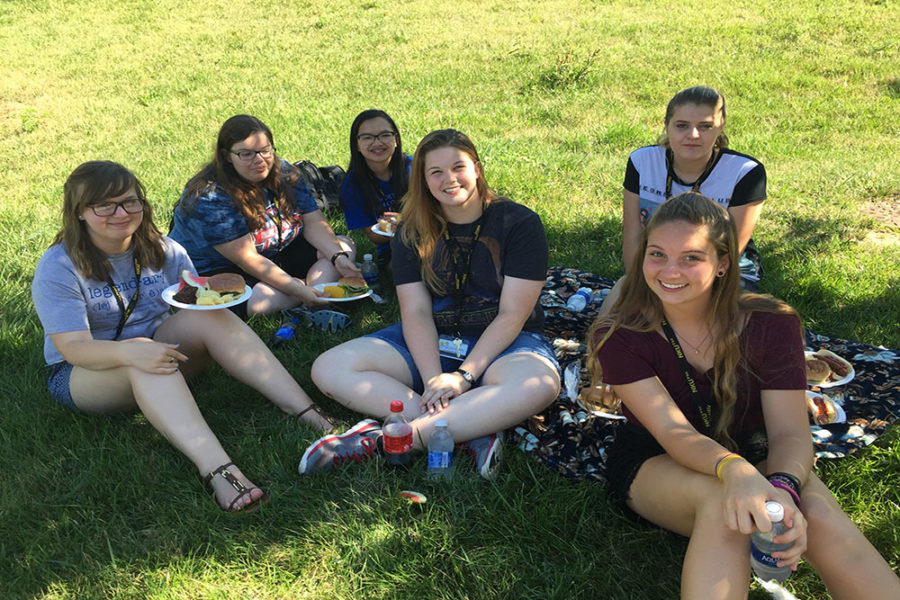 NKU’s scholars discuss their experiences at the program’s cookout.

On an otherwise empty campus, an army of high school seniors lined up to eat freshly- made burgers, watermelon and rocket pops.

It’s a super-sized backyard party with at least 100 of the 354 Governor’s Scholars Program participants at the July 11 cookout on the lawns of Northern Kentucky University.  With weeks of humidity and rain, the sky showed no signs of drizzling, which meant the postponed cookout was in full force.

The Governor’s Scholar Program is a summer, residential program for Kentucky’s rising high school seniors hosted on three separate college campuses across the state. Northern Kentucky University is one of three colleges to be chosen to host the scholar’s program for two consecutive years.  The other two colleges are Murray State University and Morehead State University.

The Governor’s Scholars Program hosted a buffet dinner for its students who buzzed with excitement and laughter.  Rihanna plays so loudly in the background that it can be heard from Business Academic Center’s front porch.  Groups of Governor’s Scholars roam the hills while joining in on a game of frisbee or corn hole.

Off to the side of Loch Norse sat a small group of girls enjoying food while sitting under the cool shade of a tree.  Just like everyone else they seemed content, going over their day as other students mingle and eat.

During this dinner break, they shared their experiences on the program — including the daunting application process.

Not only are they prompted to write essays, but they must detail how exactly they are involved in school and specifically mark how educationally advanced they are as students.  Interested students must also provide proof that they have taken the ACT, SAT or PSAT along with recommendations from teachers, their local community and school counselor in order to be considered for the program.

Even though the system sounds complex, these high school seniors describe how important the Governor’s Scholar Program applications are in their high school careers.

“Some schools require their juniors to go to meetings and prep classes for the application,” Bessinger said. “Going through this whole process as a junior is good practice for college applications.”

Kaylan Anderson, a student from LaRue County, said half of her class applied.

“But only 7 students made it in,” Anderson said.

The application process is highly selective. According to the program’s website, over 2,000 students apply statewide and only 1,100 applicants get selected.  Scholars say that some high schools make the program a big deal from their first days as freshmen while other students hear about it through friends and family. But all agree that the competition is fierce.

Rebecca Dever, a scholar from Louisville, put the process into perspective.

“Because it’s so competitive it makes us feel more grateful that we got into the program,” Dever said.

Governor’s Scholar Program holds multiple classes every day, with field trips to places like the Cincinnati Zoo and Botanical Garden and The National Underground Railroad Freedom Center on the weekends.

Jen Price, campus director, explains that the goal is to not only created a fun and educational learning environment, but also create influential leaders for Kentucky’s future.

“These are students who already are looked up to by their own peers,” Price said. “So by introducing our scholars to opening their minds to such things as community service, we hope they will inspire others to follow in their footsteps.”

That inspiration starts in the classroom.  Price explained that scholars are enrolled in three types of classes: general studies, focus area and seminar.

General Studies are classes taught by hired professors who create their own curriculum about a topic of their choosing. Seminars are basically open-floor discussions on such things as real-world topics.

“Seminar is one of my favorite classes,” said Kaitlyn Collins of Mason County. “It betters us by opening our minds and troubleshoot issues.”

Focus area classes are skill-related topics that the students requested to take from their applications. Price said there are 19 different fields in which students are individually enrolled in at NKU, such as creative writing, accounting or visual arts.  These classes are less lecture-based and uniquely hands on.

Dever is taking a class in engineering, and within that class she has been working on building a one-cubic foot model of a catapult.

“My group is making a working catapult,” Dever said. “And we are thinking of making a house to knock down when we present it!”

Raylan Smith, from Taylor County, described how one class proved to be highly useful.

“It’s called story time,” Smith said. “We learn how to use stories in business situations and how to effectively tell the story of ‘us.’ ”

She explains that it’s a way to talk yourself up while also using it to motivate a team and relate to an audience.

As the cook-out winded down with caterers and students moving on to other planned events, the girls sat and stared out across the lake. It’s a heavy reminder that the program will come to an end.

The girls once again look to each other. They smile as Anderson said, “I already know this is a life-changing experience.”