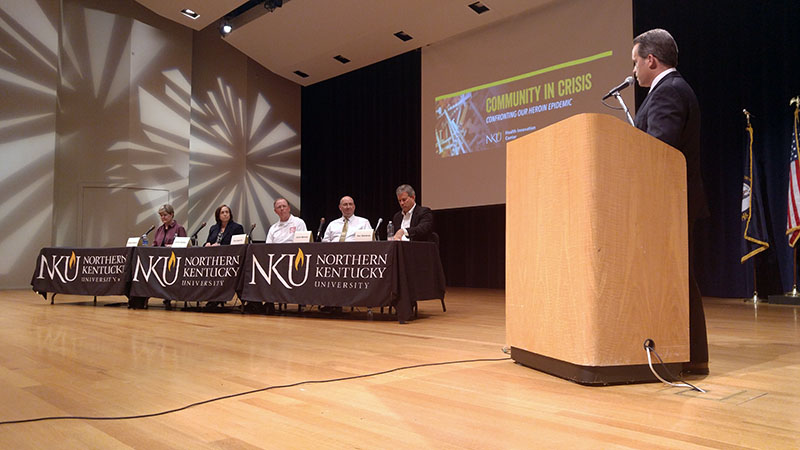 As the moderator took the stage, he asked members of the audience to raise their hand if they have lost a family member or a friend to heroin addiction.

A sea of fingers and palms faced the stage, lingering in silence. Of the 650 seated in Greaves Hall that night, more hands were raised than not.

On April 18, NKU’s Health Innovation Center hosted a conversation with Sam Quinones, best-selling author of “Dreamland,” to discuss the community’s battle with heroin addiction and possible solutions to alleviate the problem.

The conversation was followed by a panel discussion with advocates, researchers and public health officials.

President Mearns said the goal of the event was to promote better understanding of the epidemic within the community.

“Here at NKU, we are a leader in health innovation,” Mearns said. “We bring our community together to examine and to discuss critical issues like the heroin epidemic, and we aspire to help the community come together to solve that problem.”

THE CREATION OF “DREAMLAND”

It was a snowy New Year’s Day in 2013. Over a cup of chili at a tavern in Covington, Quinones met a woman who told him the story of how her son overdosed on heroin.

“I could not believe how you could throw a dart at a map and come into a tavern in the middle of nowhere and find a story about someone who died of a heroin overdose… in Kentucky,” Quinones said. “To me that was a stunning thing.”

Four years prior to visiting Northern Kentucky, Quinones learned of a surge of heroin overdoses in Huntington, West Virginia. These were overdoses on not just any heroin: people were dying from black tar heroin, a type of heroin Quinones had only ever seen west of the Mississippi River.

Having been a crime reporter in Stockton, California, Quinones knew the roots of black tar heroin could be traced to Mexico.

“My question was, ‘What is black tar heroin doing in quantities sufficient to kill a dozen people in Huntington, West Virginia, in a period of about six months where they’ve only had one fatal heroin overdose in ten years,’” Quinones said.

Quinones learned the black tar heroin was coming from Columbus, Ohio. A DEA agent in Columbus explained the way heroin was being trafficked.

“He says to me, ‘Ten years ago, we had no heroin in Columbus, none, zero,’” Quinones said. “‘Then we began to see this weird thing happening. We began to see all of these Mexican kids, driving around in old Nissans, with their mouths filled with tenth of a gram doses of heroin wrapped in balloons. They kept a big bottle right next to them of water, so if the cops pulled them over they could swig it on down.

“‘They were dispatched. They were selling heroin like pizza.’”

Quinones had a hunch that the black tar heroin had come from a small town in Mexico. He wrote to fifteen drug traffickers in prison, asking if they wanted to talk about their “pizza delivery system.”

One of those men responded to Quinones’ request. He told him that the heroin delivery system was the trade of his town, Xalisco, a small city in Nayarit.

“The question was always, ‘why would they have a market in West Virginia, of all places,’” Quinones said. “That also made no sense.

“These questions sent me on a trek that resulted in a book, “Dreamland.””

Quinones went on to discuss potential solutions for the heroin epidemic, stating that isolation plays a tremendous factor in heroin use.

“Seems to me, if you want to keep your kids off heroin, make sure people in your neighborhood do things together in public, often,” Quinones said. “Break down those barriers that keep people isolated.

“Create your own Dreamland on your block.”

When Saddler noticed a spike in hepatitis C rates, she knew she had to talk to members of the community about the issue of heroin use.

“I knew that I had to talk to other people,” Saddler said. “Not just the hospitals, but the advocates, elected officials and a whole bunch of other people in the community to try to build support for the public health tools that we need to address the diseases that come with this epidemic.”

Goddard agrees that while there is movement within the community to try to address the problem, she is discouraged by negative attitudes about programs like syringe exchange.

Specht said he bought into the stigmatization of heroin users until he was hit close to home. His son, Nicholas, died of a heroin overdose in August 2013.

Merrick, a former heroin user, said he is lucky that he did not lose his life to addiction.

“I’m in recovery,” Merrick said. “I made it. I lived through it.

“I get to bring you… a message of hope.”

Merrick said compassion, education and understanding are what enabled him to seek treatment.

Quinones agreed that understanding is imperative in battling the crisis, but he also stressed capitalizing on the momentum that is happening within the region.

“You make your voice known, and you don’t stop,” Quinones said. “You will be heard.”

He said the drug and alcohol program in Kenton County is a program worth fighting for in all facilities, and society should reconsider the way individuals simply sit in jail.

“Instead of them sitting around, arguing what TV stations to watch… why don’t we provide a learning, productive experience,” Quinones said.

Merrick said that the complex disease of addiction calls for several solutions such as more treatment, syringe exchange programs and an overall shift in culture. He believes Northern Kentucky has the resources to act out these solutions.

“If this area is anything, it is community-based,” Merrick said. “We are a strong community. We come together in crisis, and we make things happen. We change laws, we raise money, and we make it happen here. I’m very proud to say that.

“I came here a transplant from California, and I have never seen a community come together to address a crisis better than I have here in Northern Kentucky.”

NKU Provost Sue Ott Rowlands echoed the importance of coming together to combat the crisis.