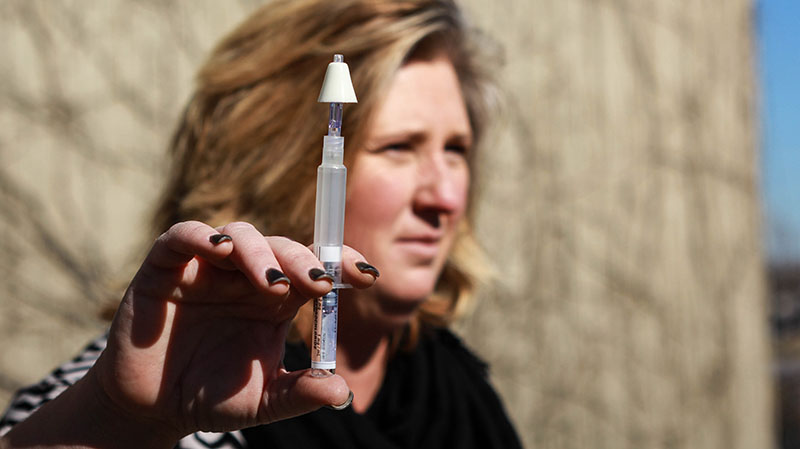 An agent for change

Photo Above by Fabio Souza.

Sharp screams rang out like sirens from her bathroom. Through the glass doors of the shower, Kristie Blanchet watched her sister-in-law’s eyes widen in agony with each drop of water that struck her skin.

Desperate for a place to stay, Blanchet’s sister-in-law arrived at her house after two years of living only for heroin.

Her eyes were empty.

Her hair was matted.

“I put her in the shower and I turned the water on and I looked at her face, and I saw the fear of death like I had never seen in anybody in my entire life,” Blanchet said. “And it was at that point that I realized, this is not what she wants, she is not choosing this. This is choosing her right now.

“This is controlling her decisions.”

Blanchet recalled this moment as one of the most painful and eye-opening experiences of her life.

It was in that instant that she decided to pursue a degree in social work at NKU in 2011. Her studies led her and classmate Jason Merrick to develop a training program educating law enforcement officials on how to handle overdose situations.

Now both Blanchet and Merrick are in the master’s program, conducting weekly demonstrations for police officers and first responders on how to administer Naloxone, the proper handling of syringes and how to prevent the transmission of Hepatitis C and other blood-borne illnesses.

Based on the experiences she faced with her sister-in-law, Blanchet also aids individuals living with addiction in finding treatment.

“I sat down and I tried to figure out where we could send her, what we could do, what the options were and I couldn’t find anything,” Blanchet said. “And all I could think to myself was, ‘Holy crap, I’m sober, and I can’t figure this out. How is somebody that is in active addiction supposed to be able to navigate this? There’s no way.’”

Blanchet walked briskly down the hallway of Landrum Academic Center, despite the large trunk clunking behind her carrying a mannequin, numerous Naloxone kits and pamphlets.

Calm and confident, she stood in front of a packed classroom, her mannequin and her materials strewn across the table in a seemingly endless mix.

Blanchet pulled a clear device from her bag, a cone at one end and a plunger apparatus at the other. Inside the syringe-like device is Naloxone, an opioid antagonist that is used to reverse the effects of an overdose. It can be injected into the muscle, but it is more commonly used in the form of an intranasal spray.

In the event of an overdose, Naloxone kicks heroin out of the receptors of the brain, rapidly restoring respiration and triggering immediate withdrawal.

With an expert combination of care and certainty, she placed the cone inside the nostril of the mannequin.

“Once you get that put in, head still tilted back,” Blanchet said, her attention divided between the mannequin and directing the class. “You’ve got [the Naloxone] in one nostril, you’re going to make a really good seal there. Half of the medication on one side, half of the medication in the other side.”

Blanchet gently pushed on the plunger as she reminded the class to continue rescue breathing for the person.

Blanchet explained that she began conducting Naloxone trainings in March of 2015, coinciding with the passage of Senate Bill 192, which allows Kentucky law enforcement officers to carry and administer Naloxone, while also protecting the individual who has overdosed from criminal charges under the Good Samaritan provision.

Her work has been nonstop ever since.

Blanchet estimates that she has trained over 40 law enforcement agencies in the area in less than a year.

The full-time student and mother of six conducts these demonstrations at least once a week to police officers, nurses, mothers and fathers and students at NKU.

“You hate to say that you enjoy what you’re doing, especially in such a tragic situation, but we really do enjoy what we do,” Blanchet said. “Because we know that even if we get this kit into the hands of one person and it saves one life, we’ve made a huge difference. That’s one more opportunity for them to get into treatment.”

A START IN SOCIAL WORK

Blanchet said she used to be quiet in class, but she found her voice when she landed an internship through the Heroin Impact Response Task Force.

It was through this internship that she teamed up with Merrick to develop a training program to educate law enforcement officers on how to administer Naloxone and how to avoid accidental needle sticks.

“I’m always excited to get to go and talk. It’s what I enjoy doing,” Blanchet said. “Honestly, I did not realize that until my last semester of my bachelor’s degree.”

Merrick said he had been working on the proposal to train law enforcement officials since 2013, two years before he and Blanchet partnered to make the project happen.

“We submitted that to the Heroin Impact Response Task Force, which built a proposal to a private funder to provide the trainings and to purchase sharp resistant search gloves and sharps containers for every law enforcement officer in Northern Kentucky,” Merrick said.

With the help of the Heroin Impact Response Task Force and Coordinator Jim Thaxton, Blanchet and Merrick received $88,000 so that they could help equip police officers and first responders with Naloxone, protective gloves, sharps containers and evidence tubes.

James Taylor, an NKU lecturer in social work, worked with Blanchet and Merrick as they completed their project. He said that their work was unique because it provided so much more than individual care.

“Kristie was a marvelous student,” Taylor said. “The one thing I would say about her is that she is extremely passionate about what she does. That passion really shines through in her work, which is advocacy. She is a true advocate for the cause that she is behind, and it was evident in my class.”

In addition to her work within the social work program, Blanchet serves as the chairwoman of Northern Kentucky People Advocating Recovery (NKY PAR),  an organization that strives to bridge the gap to recovery through education and training.

Blanchet also attends rallies in Frankfort to support bills that she feels will benefit those struggling with addiction.

Despite the countless hours of advocacy work, Blanchet does not take credit for her service.

“This isn’t about me,” Blanchet said. “This is about every single person that is in the throes of addiction, and getting them to a place where they are ready to step into recovery. For me, it’s about helping in any way I possibly can.”

MOVING FORWARD BUT REMAINING THE SAME

With Blanchet’s guidance, her sister-in-law has been sober for four years. She has a full-time job as a supervisor at a restaurant downtown, and she is getting ready to purchase her first house.

Blanchet will graduate in May with a master’s degree in social work, and although she will no longer conduct advocacy work through the program, she expects to do even more within the community following graduation.

She plans to keep teaching people how to administer Naloxone through NKY PAR and helping individuals find treatment facilities.

“I also like the advocacy part of things and being able to go and fight for things that I feel like we need for our community to help fight this epidemic,” Blanchet said. “And, you know, there may be a day where we get a handle on heroin, but we know that coming right behind it there is going to be something else.

“We’re always going to be fighting this battle. To be able to speak for those that can’t find their voice is definitely something that I want to do until we can empower them to find their own.”