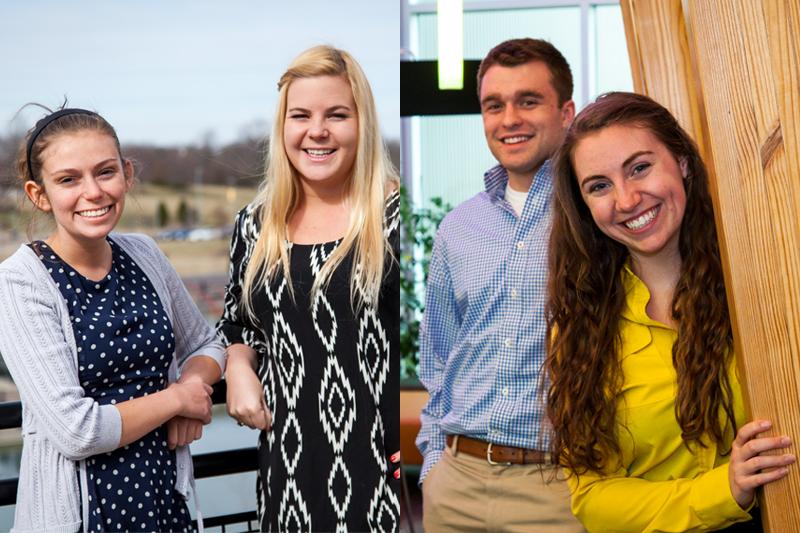 Current Vice President Kat Hahnel and Senator Will Weber are ready to fight for more state funding, a strict budget, and continuing scholarships. But will Senators Ellie Kremer and Hannah French sweep NKU off their feet with a vision of a closer-knit NKU community and an expanded Road to NKU tour? Find out what the presidential and vice presidential candidates stand for before you cast your vote.

Kat Hahnel loves budgets. The junior vocal performance and accounting double major is proud of the recent spending cuts and allocations she’s made to student government’s budget as vice president and is confident she can handle the demands of another year of expenses. In fact, she’s actually looking forward to it.

“We actually didn’t use all of our money this year that we got because I’m a very conservative person when It comes to money,” Hahnel said. “It’s the accountant in me.”

This year she’s asked for less money for SGA than ever before in an effort to give funds back to the Legacy Fund for the growing amount of student organizations on campus. Hahnel, alongside her vice presidential candidate, junior entrepreneurship and economics double major Will Weber, believe they can provide all of the same services, sponsor SGA’s usual events and also continue SGA scholarships with their conservative budgeting methods.

The running mates are also concerned about NKU’s budget. Hahnel believes her lobbying experience and Weber’s internship with NKU’s liaison to the Kentucky General Assembly and Congress Joe Wind will help them push for outcomes-based funding next year.

Hahnel plans to join forces with others in the Board of Student Body Presidents at other public universities in Kentucky on the funding issue. She believes this will be more effective than lobbying efforts in the past.

Hahnel and Weber want to take an individualized approach to inclusive excellence next year.

“I think that the [gender-inclusive] restroom resolution was great… it was something that needed to happen, but I think also if we make individual students feel that they are included in everything then overall you’re going to have more inclusive student body,” Hahnel said.

Talking to other students about their day-to-day life as a student and any problems they encounter is the first step towards building a more inclusive student body and morale, according to Weber.

“It’s giving students a voice and strengthening that voice of those who don’t really speak up as much or don’t really have the numbers to say, ‘You know, this is a problem,’ or ‘I don’t really know’ or ‘I don’t feel comfortable with this,’” Weber said. “Student government represents 16,000 students and that means that every one of them is included. It’s about you.”

One demographic of students that Hahnel and Weber plan to help better include are older residential students.

“We don’t embrace older students living on campus,” Hahnel said. “We kind of make them feel like they have to get off campus if they want to be an adult.”

The two want to begin working on bringing upper division housing to NKU — an idea that was discussed among the administration a few years ago but never implemented.

“I remember sitting in [Freshman Service Leadership Committee] my freshman year being talked to about upper division housing and us getting that in time for our senior year,” Hahnel said. “It was in the administration’s mind, the provost was behind it, but then the provost left and when it just came down to it, there were no students pushing for it.”

After the growth University Housing has experienced in recent years, Weber now believes it is time to implement housing for upperclassmen.

“We’ve heard a lot of concerns from students who are 21 and older who don’t necessarily feel as comfortable living with students in the dorms who are younger,” Weber said. “We feel there is a need for that and that for students who go off campus to live, if they can stay on campus, that keeps that community here but still caters to them in some way.”

Hahnel and Weber also want to plan for a future with Greek housing.

“The Greek life population is continuing to grow more and more every year so that’s a huge amount of students there that have a need for something,” Weber said. “Comparable institutions, and I would venture to say local Division I schools, offer Greek housing.”

He also believes Greek housing could even start a shift in NKU becoming less of a commuter campus and more of a place where students want to live. According to Weber, if Greek students currently living in university dorms moved to Greek housing, it would open up even more space for students to move in, growing the campus community.

Hahnel and Weber also want to grow the community through supporting continuing scholarships that will retain students at NKU. Weber dislikes the fact that many students take advantage of the university by taking inexpensive classes with an upfront scholarship, but don’t stick around to enjoy all of NKU’s benefits.

Student government represents 16,000 students and that means that every one of them is included. It’s about you.”

“I don’t like when people use my university, I kind of get a little irked on that,” Weber said. “If we are able to promote the current, continuing and transfer student scholarships that are offered and say, ‘Hey, you’re already here, why don’t you stay and apply for this scholarship?’ Then scholarships will keep people here.”

Outcomes-based funding would impact scholarships at all levels, according to Weber. He believes scholarships would be more widely available on an individual basis, organizational basis through allocation funding, and to the whole institution if more state funding is supported. Weber also supports a cheaper graduate school tuition rate for students who attended NKU for their undergraduate degree.

Hahnel wants to change the perception of student government that the president and vice president are on top. Rather, the senators and student body contain all the power.

“I want to be so encouraging and for people to know that its not Kat’s goals, it’s not my agenda, its not even e-boards agenda– it’s completely you,” Hahnel said. “If I have the honor of being president, e-board will not have any goals… because that is something that comes from the senators, it comes from the students.”

Ellie Kremer never thought she would end up at NKU. The junior international studies and anthropology major attended a high school just 20 minutes away and viewed the university as a last resort when she applied to colleges. Now a presidential candidate in this year’s race, Kremer, alongside Vice Presidential Candidate Hannah French, wants students to fall in love with the campus as much as she did.

At the top of her to-do list is an initiative to expand the Road to NKU tour to area high schools to increase enrollment. Kremer believes NKU can’t count on their current reputation at local schools to bring in more freshman.

Kremer and French want to strengthen the community feel of NKU to attract commuter and residential students alike. If elected, the two want to work more closely with the Activities Programming Board to plan more events such as concerts and start NKU traditions similar to UK’s Big Blue Madness.

“We want NKU to be a home away from home for people who live here and people who don’t and that’s something we think is lacking right now,” French said.

A large part of instilling a sense of community is building connections among students, according to Kremer. She and French want to connect more people to organizations, particularly commuter students who may feel disconnected from the university.

Kremer and French also want a build an alumni community that is still involved with NKU, a group that they say is almost nonexistent.

“We both worked for NKU phon-a-thon last year and called alumni and we found that most alumni do not really care and we do not really want that,” French said. “I think the first step of having alumni wanting to stay involved at NKU is getting collegiate students to love NKU from the get go.”

Kremer said making the university more inclusive goes hand-in-hand with creating a community. She and French plan to strengthen current offices in student affairs while also creating a new ones.

“I’ve been working with Bonnie Meyer [director of LGBTQ Services] on a type of women’s center. We don’t want to call it a women’s center, but an office that would serve women. We would work a lot with the Green Dot and Norse Violence Prevention,” Kremer said.

Kremer was involved in passing a resolution last semester in support of gender-inclusive restrooms and said she would use her connections to pursue other inclusive initiatives.

“I feel like having my foot in the door of all of the organizations I’ve been a part of definitely will help transition us to the president and vice president position because we have already made so many connections,” Kremer said.

Additionally, she said she would utilize connections in Frankfort from an internship with Senator Webb and lobbying experience to continue the push for outcomes-based funding.

French has little lobbying experience but said she is eager to learn.

“We are the most underappreciated school in Kentucky and that is something that we don’t want to continue happening,” French said. “If we need to go lobby, we need to do the most we can to provide for NKU and their students.”

Building an awareness about the need for state funding and educating students will be key, according to Kremer. She plans to communicate with students about current issues as well as listen to student needs.

“I want to continue what John [Jose] and Kat [Hahnel] started and go to the organizations and see what they need help with,” Kremer said. “We can’t say we’re going to help them if we don’t know what their problems are.”

French said she and Kremer want to come up with resolutions that people have never heard of or work on problems that have never been brought to SGA’s attention before.

“There’s a difference between hearing someone and actually actively listening to someone and I feel like that’s what were going to focus on is actually implementing things that people can utilize,” French said.

Kremer and French plan to tackle student uncertainties about professors or classes with a public course evaluation on NKU’s website.

We want NKU to be a home away from home for people who live here and people who don’t and that’s something we think is lacking right now.”

“It’ll be like a rate my professor type thing, but for the university so that you don’t have to go to a third-party source, you can see from students that went here and see what they say about different professors and classes,” Kremer said.

She believes that knowledge about the professors and classes available from actual students will help others find the class that’s right for them. French thinks more students will actually fill out their course evaluations for this reason and that the evaluations will become a valuable resource.

“If they see the value in how it can possibly benefit someone else, or someone younger than them, a sibling, that will make them more willing to do the course evaluation,” French said.

Kremer and French said they are looking forward to the possibility of serving the student body.

“We want them to feel welcome and we want to give them opportunities they can grasp,” French said. “I feel like its a give and take, but we need to put those opportunities out there for people to take them.”