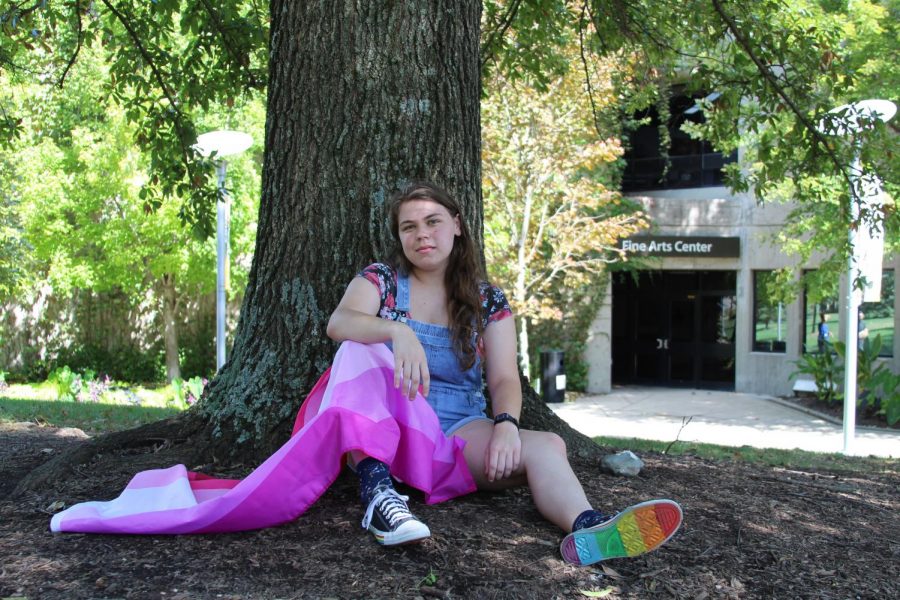 The president of Lavender Society is a 'loud, proud lesbian'

Isabel Sleczkowski is a loud, proud lesbian. Or at least that’s how she describes herself.

She’s a friend; she’s a safe place. She occasionally puts too much on her plate but tries to give everything she has to each of those things. She’s always learning and growing. She’s an intersection of passions that have manifested in a unique way.

Sleczkowski, junior theatre major, is the founder and president of Lavender Society—an NKU club for queer women and non-binary people who love women.

For many, Sleczkowski is a role model—although, she doesn’t think of herself as one. It’s a role she’s grown into, especially in college.

“It felt like it came out of nowhere, where I’m like, ‘what’s so special about me?’” Sleczkowski said. “I don’t really understand why people look up to me. It means a lot to me. I mean, to know that the work I’m doing is helping people means more to me than anything.”

The outspoken activist, sometimes referred to as “gay Jesus” by her mentees, wasn’t always confident in herself.

When Sleczkowski dated a boy for two years in high school, she said she assumed any feelings toward men was attraction, a term she said is called compulsory heterosexuality.

She said she subconsciously sought out the first boy who would date her to prove to herself that she was straight.

Sleczkowski said she began questioning her sexuality around this time. During her freshman year, she was at a friend’s 16th birthday party where she noticed a girl dancing.

“I just was so enraptured by her that I was thinking about kissing her,” Sleczkowski said. “I was like, ‘that’s kind of weird; Maybe I’m [bisexual], but only for this one girl’ which is really unusual because most people don’t actually know what [bisexuality] is until after they start questioning.”

Shortly after, she dated another boy to prove to herself that she was straight because she was confused about how she felt. They broke up and she started developing feelings for her best friend.

“I always wanted to see her. I remembered all these details about her,” Sleczkowski said.

While she was having these thoughts and realizations, a boy she went to school with outed her sexuality.

“I was outed because there was a boy who kept hitting on me and wouldn’t take ‘no’ for an answer—wouldn’t take anything for an answer—until I, finally, was physically and metaphorically cornered and told him I was gay,” Sleczkowski said. “He told everyone.”

Because of that, Sleczkowski was the only out lesbian at her school in Louisville at the age of 15. She was propelled into a place of needing to have all the answers, she said.

Being the only source for LGBTQ information in high school was overwhelming at first, Sleczkowski said.

“I didn’t really know anything,” Sleczkowski said. “I definitely gave out some wrong information. All of us speak from points of ignorance before we’re educated. I think the difference is that I made a very conscious effort to educate myself.”

She said she still educates herself today by following Twitter accounts of people who identify as whatever she’s learning about.

Sleczkowski immediately sought out the Office of LGBTQ Programs and Services when she came to NKU.

During her freshman year, she was in the mentee-mentor program. During her sophomore year, director of the office, Bonnie Meyer, approached Sleczkowski about starting a new organization.

Sleczkowski said she created Lavender Society to bridge the gap between queer women and non-binary people. She said she didn’t realize the need for the organization until she started it.

She said that because she’s open and loud about her sexuality, other people are less afraid to be open—which is one of the most impactful things she’s done just by being out.

In addition to being the president of Lavender Society, Sleczkowski is the lead ambassador in the Office of LGBTQ Programs and Services, a youth group facilitator for GLSEN (Gay, Lesbian & Straight Education Network,) a member of the inclusive excellence committee for the College of Arts and Sciences, a secretary for Alpha Psi Omega, the head props master for the theatre department and more.

“My email signature, as you probably noticed, is long,” Sleczkowski said while she laughed.

Nowadays, Sleczkowski said she’s less apologetic about being gay or wearing pride shirts. She said she hates the stereotype that being gay shouldn’t be a personality trait.

“My lesbianism—and to a lesser extent, my demi-sexuality—has affected my experiences and my life … it’s going to be a part of who I am, regardless of whether or not it’s an identity, or a part of me or how you feel about that. Like, yeah, it’s a personality trait; it’s going to affect how I think about everything, how I approach everything.”

“Whether or not I like it, being a lesbian affects my views in every single class, in every single thing I do,” Sleczkowski said. “I’m going to be noticing things from a different perspective. And I’m trying to help other people see that, too.”