‘We want to be united’: Students march, sit-in in protest of university vandalism 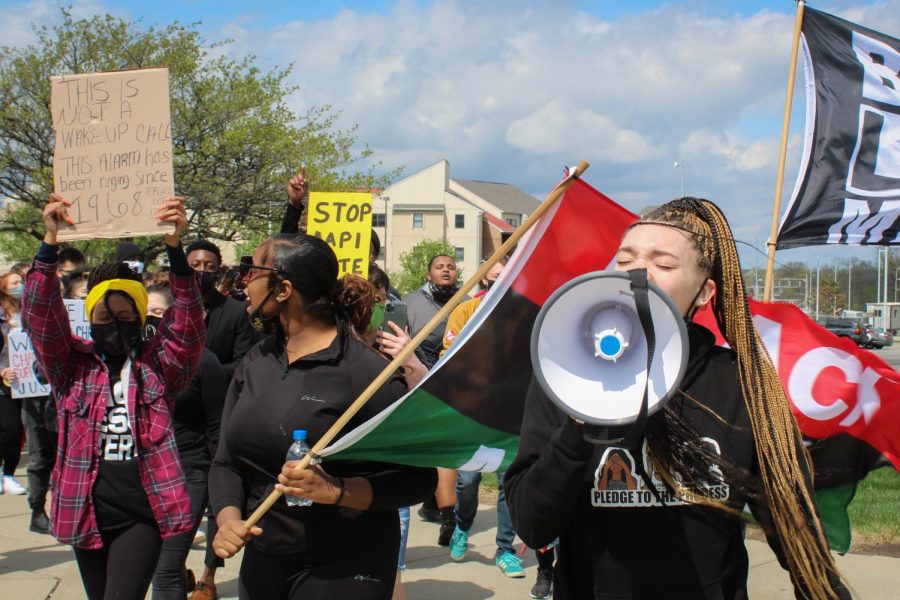 The Black National Anthem, Lift Every Voice and Sing by Alicia Keys, echoed off the tops of the Boothe Village. While the song played, numerous students, faculty and staff surrounded the now-gray Housing Rock in a moment of silence.

Cameras from local news stations were pointed toward the flags waving in the air as students’ heads were bowed in respect for the anthem. As Keys’ final notes rang, President-elect Aliya Cannon grabbed her megaphone.

“Today’s march is here to unify us,” Cannon opened the event.

“[To] bring us together, to show individuals that united we stand divided we fall in Northern Kentucky University we stand together. That means administration. That means students that means faculty.”

A few speakers came to the protest sharing poems and motivational words. SGA Students Rights & Advocacy Chairwoman Karla Arango spoke to the crowd affirming the larger problems with the discrimination on campus.

“Knowing your enemy is part of the battle, but now’s the time for action against hate, not just education about it,” Arango said. “So I want to begin turning the wheels in everyone’s head to get us on the path of making this campus better for all of us who call it a home.”

Arango then asked the crowd what change on NKU’s campus looks like, to which the crowd had no response. Arango said although that is hard to answer alone, the protest demonstrates that they were not alone in the battle to make a change.

Taking a note from the University’s motto, Arango said the university needs to do more than ‘igniting the spark’ and it’s time to maintain the flame. She began pushing students to take the “rose-colored glasses” off and push the administration to listen to the students because nothing has come from the town halls after the original incident.

“Tell me one thing that has come from one of those town halls after the rock was vandalized the first time. Because last time I checked, the only thing that came from that was a culture that would allow it to happen again,” Arango said. “Every single one of us are tired of the empty promises. We are exhausted from being told it is our responsibility to ensure safety and well-being.” 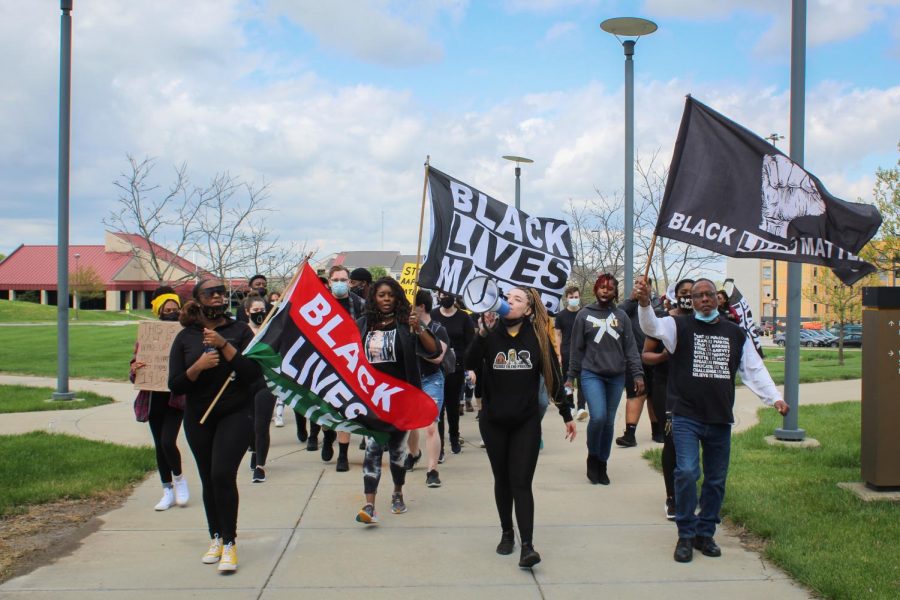 After the speakers, they began their walk through campus toward the Lucas Administrative Center. As they walked, the chants of the crowd cheering “this is what democracy looks like” bounced off the Landrum Academic Center and Steely Library walls as their flags waved in the air.

Once they arrived in front of Lucas, the crowd began their sit-in outside the third-level entrance. Mohammed Omar, sophomore political science major, began reading their demands.

The first demand read, “We demand from our leadership, and the University to properly support anti-racist efforts and dismantling of white supremacy within academia in campus life, including, but not limited to, financial support, dedicated salaried time, and the ability to listen to and uplift the voices of BIPOC students, faculty, and staff, throughout the process.”

The full list of demands, 12 in total, covered different areas of requests including, hiring or forming a team to monitor the Rock, prioritizing and listening to the problems of marginalized communities on campus, the perpetrators of the Jan. 27 and April 3 vandalisms face criminal charges, the Vice President of Student Affairs lose their ability to disband organizations and for President Ashish Vaidya to publicly apologize for his lack of action against Patriot Front.

Through the windy area, more students spoke on how white people can support Black students during this time. Grace Wesson, senior public relations and theatre arts major, pushed the crowd to find ways within their organization.

“It comes with a lot of us actually implementing this change within our own student organizations, addressing the policies that we are sent that a lot of our organizations that were built on white supremacy,” Wesson said.

Wesson said people can address and fix the supremacist origins of the organizations on campus by uplifting and listening to the voices of students in marginalized communities and it goes further than sharing tweets and Instagram posts.

Omar began speaking again and gave a call to action to the administration in attendance. 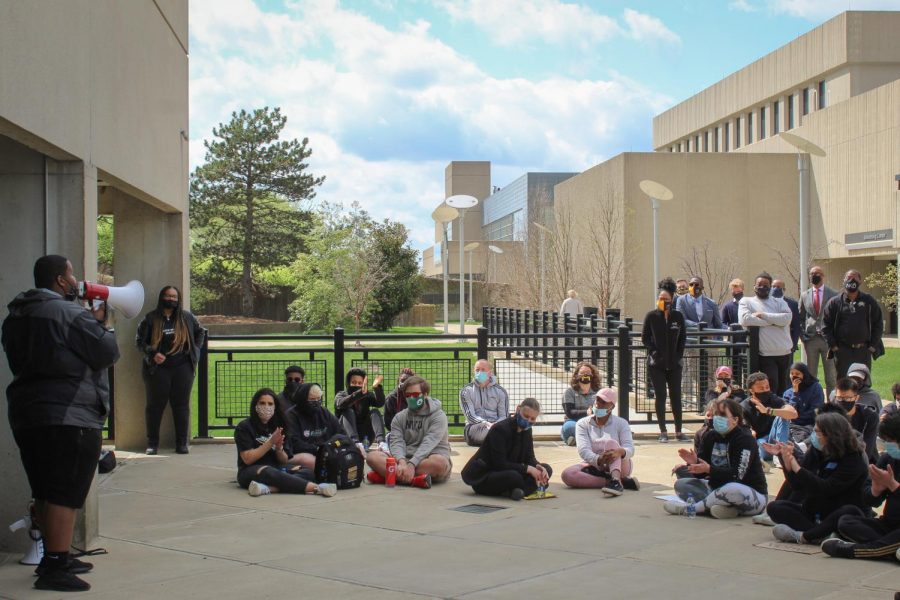 “This call to action is for you guys to [inaudible] provide a specific time and date to go back out there and repaint that rock on the behalf of the Black and Brown students on this campus,” Omar said looking out to the administration in attendance.

Gentry, freshman psychology major, organized the initial painting of the rock. When the rock was vandalized, her immediate reaction was frustration.

“I was extremely emotional about it simply because of all the hard work that I put into it just for it to stay up for about two or three weeks,” Gentry said. “It felt kind of graphic simply because they crossed out all of the black kids, that kind of that was really what hit home.”

Gentry said she wanted the protest to get the word out to people and she said that she enjoyed people from off-campus coming to hear and understand what was happening.

She said the administration should do things to make this campus safe instead of acting like it is safe, when she feels it’s not.

President-elect Cannon said, for her, the next step following this protest, is ensuring students are heard.