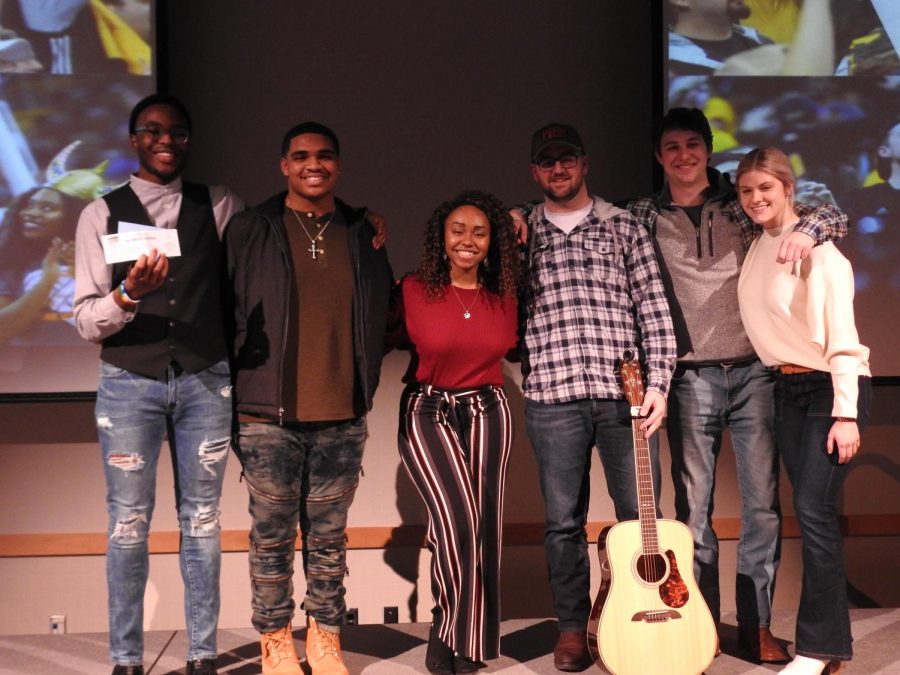 The SU ballroom was packed Wednesday night for the annual homecoming talent show. Students from all organizations came to support their favorite performer as they competed for the chance to take home the grand prize of $100 on their All Card.

The show included 11 acts, including singers, musicians, two students who performed spoken word and one who did a praise dance, a type of dance that is used as an expression of worship.

The audience was welcomed by the host of the show, Danielle Polion, who started out by welcoming everyone and then got the crowd going by having a yelling contest between each side of the room.

Polion, sophomore electronic media broadcasting major, said the one house rule of the night was “when you see something you love, stand up, clap and show some love,” and the crowd did not disappoint.

Taytum Akers, senior criminal justice major representing Phi Sigma Sigma, started the show with an acoustic version of “Creep” by Radiohead. Akers said it was nerve racking, but the feeling of getting up on that stage was different. She said the last time she performed like that was three years ago in high school theater.

As the night went on, the crowd stayed true to the house rules and continued to clap and make noises for their favorite performers. Even during intermissions, everyone was up, dancing and sharing laughs with one another.

“I am a little biased because Makayla is in the same sorority as me, and she is just incredibly talented, so of course I am rooting for her, but outside of that I have to be biased toward Jontay. He’s phenomenal and I work with him, and he’s an RA in my building. His performance was beautiful,” first time talent show attendee, Casey Williams said.

“I feel overwhelmed, this is my second time doing [the homecoming talent show] and I’ve done other talent shows before. The closest I’ve ever come to winning is second place, but it was kind of surreal hearing my name for first place, but I was excited,” Elliot said.

Brown encourages anyone that wants to perform to “just do it.”

“We have three committees, so we see which one you’d fit into best. If you like planning committees and planning events, if not it’s fine. If you have a good idea you can share that’s good too. Just someone with a creative mind and an open mindset,” Woll said.