The Japanese Club brought in KFC for their last meeting, which families in Japan traditionally eat every Christmas since 1974 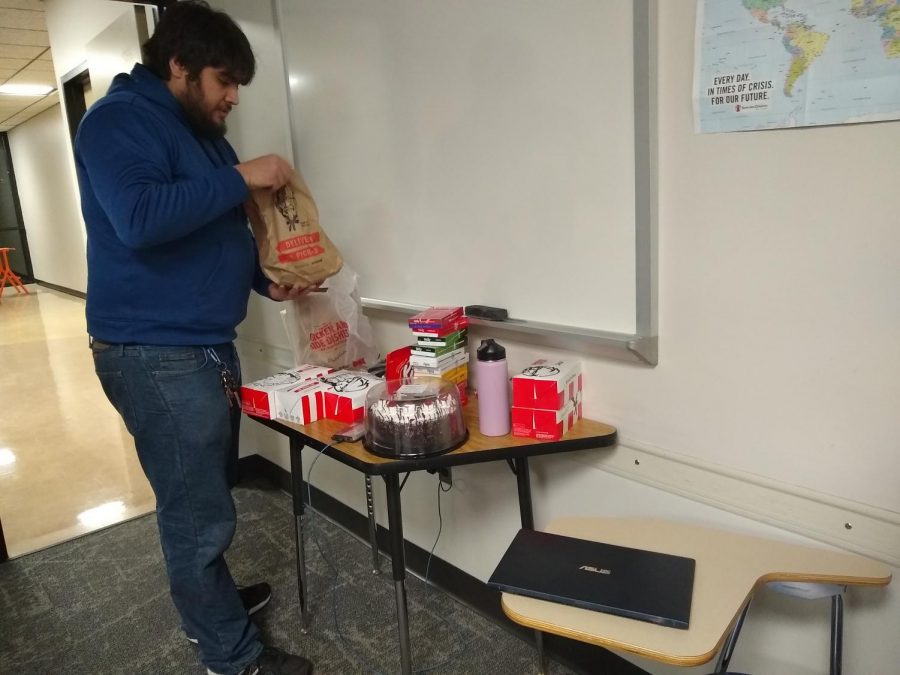 On Thursday night, the members of the Japanese Language and Culture Club gathered in MEP 300 for one last meeting to celebrate Christmas in the true Japanese style—with a bucket of Kentucky Fried Chicken.

The Japanese Language and Culture Club offers a chance for Japanese majors and minors, as well as those who are interested in Japan in general, to learn more about Japanese culture. The club members started off their final meeting of the semester by playing Uno, calling colors for Wild Cards with the Japanese words.

Quinn Brittain, sophomore computer science major, attended the meeting because he saw a flier for the club in Griffin Hall. Though he’s not a Japanese language student, he participated in Uno and learned Japanese colors while doing so.

Japanese covers of Christmas songs, including favorites such as “Last Christmas” and “Rudolph the Red Nosed Reindeer” played in the background through the entire meeting and were recognizable even to those who aren’t familiar with Japanese.

About halfway through the meeting, the club president, Michael Berdomo, senior Japanese major and Nathan Durbin, junior art major, left to pick up dinner for the group from Kentucky’s most famous brand.

Eating KFC on Christmas is a Japanese tradition. This particular tradition started in 1974, when a KFC spokeswoman started an ad campaign called “Kentucky for Christmas.” Since then, it’s taken off, and millions of Japanese enjoy KFC on their Christmas.

Because there’s not a large Christian population in Japan, Christmas isn’t as important a holiday as it is in America. However, it seems the fast-food chain has now created a Japanese tradition that was thought to come from America.

It seems most fitting, then, that students at NKU have brought the Japanese tradition to Kentucky. Catherine Chandler, junior philosophy major, said that her family has started a KFC tradition of their own.

“There’s a lot of Kentuckians that have adapted to it, like my parents basically started doing it every year now. It’s funny, we’re doing it because [the Japanese] do it, and they do it because they think we do it,” Chandler said.

After the KFC dinner, Kathryn Jenkins, junior computer science major, split some Pocky with Brittain as a dessert. A traditional Japanese treat, Pocky is a biscuit stick snack usually covered in chocolate, but comes in other flavors such as strawberry and green tea.

When the meeting came to a close, Berdomo wished everyone luck on their final exams and a Merry Christmas—though most seemed more likely to celebrate their Christmas in a traditional American way, without fried chicken.