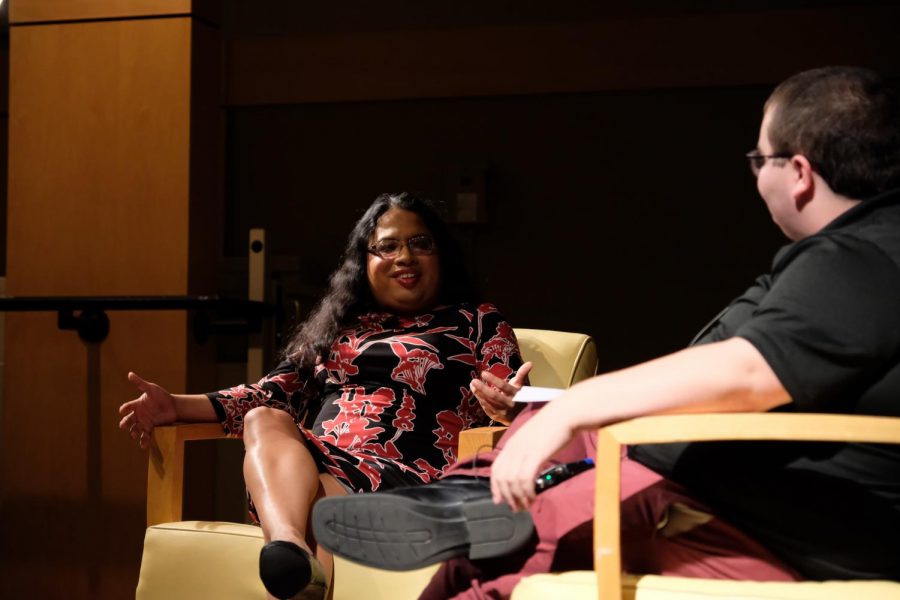 Raffi Freedman-Gurspan was the LGBTQ liaison during the Obama administration

Raffi Freedman-Gurspan became a part of United States history when President Barack Obama hired her as Outreach and Recruitment Director, making her the first openly transgender White House staffer in history. She spoke in the Otto M. Budig Theater on Wednesday night as part of the on-campus celebration of LGBTQ+ History Month.

“In some ways, it wasn’t a big deal, in the sense of, ‘I came to work to do a job.’ I happen to be transgender. I also happen to be out,” Freedman-Gurspan said.

She was a legislative aide in the Massachusetts State House in 2011, where she was the first openly transgender staffer there, as well. Upon her hiring there, she said she often felt safe enough to bring up being trans with other legislative staff and used her experience coming from “a community that is often misunderstood” to give important perspective in her time at the State House.

Freedman-Gurspan was instrumental in helping Massachusetts pass their transgender civil rights bill, which eventually led to her receiving a job offer with the Obama administration in 2015. She was later appointed the official LGBTQ liaison to the president in 2016.

“When I got to the White House, I understood why people wanted to make it a big deal because it was very significant that an openly transgender person would be working in the White House. But one of the things that was amazing was that I was joining a community full of diversity,” Freedman-Gurspan said.

According to Freedman-Gurspan, the Presidential Personnel Office in the White House featured staffers of several different races, staffers who were visibly Muslim or staffers visibly living with a disability.

“It was almost like a microcosm of what it felt like was the spectrum of the United States,” Freedman-Gurspan said.

Freedman-Gurspan was adopted from Intibucá, Honduras by a Jewish-American family of two social workers in Brookline, Massachusetts. In her progressive household, issues of social justice and social action were common topics of conversation. She said growing up with a family that was racially different than her already taught her what it was like to be different. Her family already had several out gay and lesbian folks, so when she came out in her teenage years, she was readily accepted by her parents.

She credits her interest in social work and advocacy to the lessons her parents taught her, and because of their own interest in civic engagement inspiring her when she was a child.

The current presidential administration had the opportunity to bring back Freedman-Gurspan, but elected not to. The White House currently does not have anyone serving in the role of LGBTQ liaison to the president.

She expressed her disappointment with the White House, saying that the current administration has obstructed or rolled back a lot of the progress made during Obama’s time as president, calling the discrimination allowed in states like Kentucky and at the federal level by the administration “undemocratic” and sharing a personal example of a friend in the Armed Forces who was restricted from shipping out—despite being the best marksperson in their unit —because they were transgender.

“It’s almost like, single handedly, they have just gone across the Federal Register of policies and regulations that the Obama administration did particularly on gender identity and sex discrimination.”

Referencing world events like the protests in Hong Kong and the conflict in Syria, Freedman-Gurspan addressed the divided state of America and said comparing the U.S. to those other countries is when “you recognize how special our democracy is.”

“It’s very disturbing to see an administration so flimsily just reject all of that,” Freedman-Gurspan said. “I have hope that this has awakened a consciousness for a lot of people to recognize that government matters … while I wouldn’t have wanted this to be the situation, maybe this is the kick in the tuchus, to use a Yiddish phrase, to get people motivated to participate in their democracy.”

Voting in all elections, no matter how small, is immensely important and is the first step to being more involved as an activist, according to Freedman-Gurspan. Local elections especially matter, she said.

The next step to being involved is for citizens to step outside of their comfort zone and volunteer in their communities, whether it’s through a faith-based organization or something else entirely. She said we often forget that a basic principle of our democracy is about neighbor-to-neighbor interaction.

The last step is to for activists to follow their passion, and branch out to different fields of work.

“What I tell a lot of LGBTQ kids across the country who want to do LGBTQ work, I’m like, ‘absolutely.’ But I also really think it’s so important that we have folks who are doctors, folks who are lawyers, folks who are going to discover the cure for whatever horrible cancer,” Freedman-Gurspan said. “We need people to also just be successful and not lose hope.”

At the event on Wednesday night, Freedman-Gurspan and student body president Jarett Lopez discussed topics like her upbringing, her experiences in the Obama administration and the current state of immigration in the country. Afterward, several students asked questions.

One student asked who inspires her the most in her work, to which Freedman-Gurspan immediately responded by naming her mother.

“My mom is an advocate through and through. She champions a lot of issues people don’t seem to care about right now,” Freedman-Gurspan said, before giving examples like sanctuary cities and mental health awareness.

She also named people like Valerie Jarrett, the senior advisor to Barack Obama, and Susan Rice, the former National Security Advisor. She said the two women are inspiring because they avoided being tokenized while still speaking on issues based on their perspectives.

Janiah Miller, senior sociology and integrative studies major, asked Freedman-Gurspan her thoughts on the rise of gentrification in America, how it has affected both people of color and LGBTQ+ individuals and the ever-rising percent of homeless people in America.

Freedman-Gurspan brought up a policy she enacted with the help of former Secretary of Housing and Urban Development and current presidential candidate Julián Castro that made sure homeless LGBTQ+ youth couldn’t be discriminated against under penalty of law. She mentioned a recent example where she helped create a shelter to keep LGBTQ+ youth in Washington, D.C. from sleeping on the streets, before saying that the shelter only had 14 beds, which wasn’t nearly enough to sustain the potential hundreds or thousands of youth without a home.

She said that to stop gentrification, activists need to go to town halls, city council meetings and other similar events with opportunities for civic engagement.

“We need to start showing up where the decision making is happening,” Freedman-Gurspan said. “We need to say ‘What are you doing for our community?’ in regards to housing … we have to have that conversation, and we have to hold people accountable.”

Hope for the future

Recently, the U.S. Supreme Court has been debating whether it’s legal to fire people from their job based on their sexual orientation or gender identity. Freedman-Gurspan acknowledged the split court, but said that she knows firsthand that the justices “really do do their job and take the job very seriously.”

She mentioned how the synagogue she attends in DC also has Associate Justice of the Supreme Court Elena Kagan as a member, and that Kagan spoke on a panel during Yom Kippur about the responsibilities and processes of the court and how justices consider every perspective.

“I am hopeful that maybe the more possibly moderate leaning judges might see the virtues of employee non-discrimination protections as part of the values and customs of this country,” Freedman-Gurspan said. “People have been out in the workforce for 35, 40 years at this point. We’re in 2019, and we’re litigating this? It’s very upsetting.”

“I do hope that the justices really continue the American tradition of being on the right side of civil rights, human rights and worker rights.”

Freedman-Gurspan said that she wants all LGBTQ+ youth to continue to dream, whether big or small, and for LGBTQ+ youth living in unfortunate situations to know that they’re not alone.

“I know it’s not easy to just say to them ‘It gets better,’ because for some of them, it’s not getting better,” Freedman-Gurspan said. “I want LGBT youth to be proud, and happy, and I want them to fight. I want them to fight hard for what we fought for, because we need them to continue.”