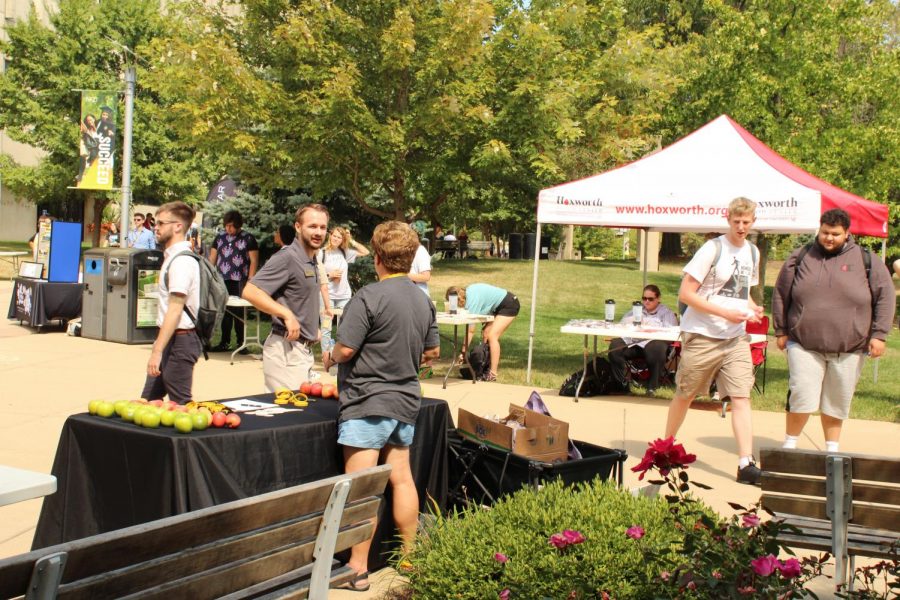 Students walk through the plaza during Fall Fest.

The event on Wednesday featured several organizations for students to join

College can be a confusing time in anyone’s life, between the newfound independence, hectic schedules and homework assignments that never seem to end. However, getting involved on campus can make a world of difference. From TRIO Student Support Services to Black Men’s Organization, NKU’s Fall Fest showcased a variety of organizations for students from all walks of life.

On Wednesday afternoon, students gathered along Student Union Plaza to speak about their organizations and the impact involvement has had on their college experience. The Office of Student Engagement and Leadership Development hosted the event.

“It’s like we’re one big family but we’re all helping each other grow academically in the process,” said Aniya Arnold, sophomore criminal justice major and member of TRIO Student Support Services.

TRIO is a support group for first-generation college students from low-income families and provides tutoring, counseling, academic and more to participants. Arnold said her former TRIO advisor helped her get through her first year of college, due to their more personal approach when compared to typical academic advisors.

Daivony Benton, freshman criminal justice major and TRIO member, said she wanted to drop out of college because of personal issues in the beginning of the year. However, through the support of TRIO advisors, Benton was able to find ways to overcome adversity.

“It’s a very safe space that I feel like I won’t be judged,” said Benton.

According to Smith, BMO is trying to create an impact within the youth in the community through a current mentorship program with Holmes Middle School, located in Newport, KY.

“When we leave [NKU], we not only build the community up, but we’re also leaving it better than the way that we found it,” said Smith.

According to Steven Jones, a senior with a double major in sports business and communication studies and a member of BMO, the organization strives to expand the minds, businesses and educational standpoints of its members and fellow students.

“With that 14%, we want to bring that all together, and we want to just uplift each other,” said McCrary. “There’s not a lot of us around, so when we do see each other, we want to make sure that we help them strive.”

Smith said that interacting with students that are trying to work on themselves is really inspiring.

“When you see a group of individuals not only that look like you, but also striving at every aspect of life to better themselves… I wouldn’t say it’s competition, but it pushes you to be better,” said Smith.

Sarah McIntosh, a senior communication studies and English double major and president of Habitat for Humanity, found inspiration of her own through philanthropy.

According to McIntosh, Habitat for Humanity Student Chapter aims to provide safe and affordable housing to members.

“Throughout the entire process the family helps you build their house… you can see the house become an actual home,” McIntosh said. “It’s definitely life-changing.”

Whether you’re looking to receive support, make friends or give back to the community, NKU has an organization for all students to find ‘success by design’.