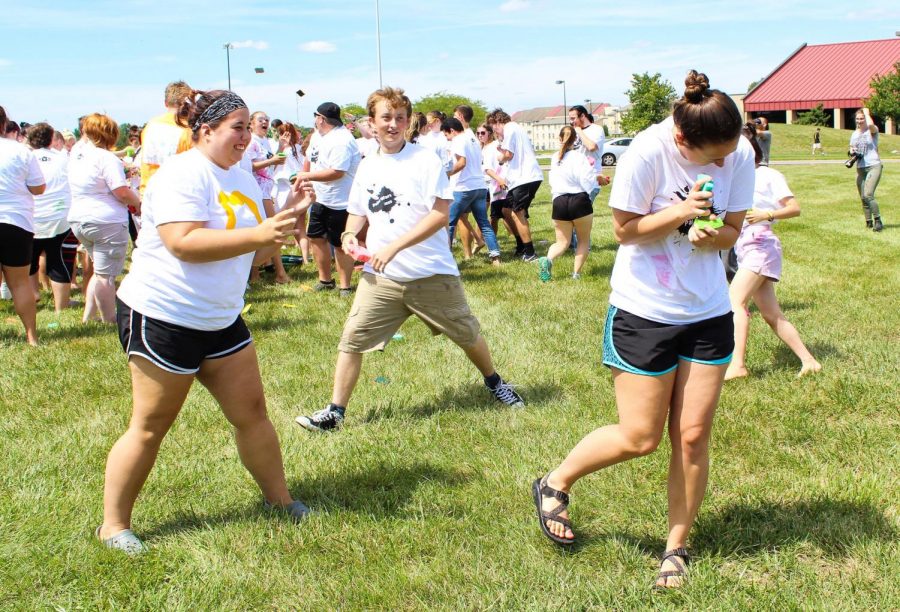 Students gathered Sunday for the last activity of Victorfest

Students gathered on the science lawn this Sunday afternoon to partake in the annual Paint Wars, an activity put together as part of NKU’s ongoing VictorFest.

The paint war was assembled as an opportunity for NKU’s students to make new friends and celebrate the completion of the first week of class, all while having fun as well. As students made their way to the lawn, they were handed white t-shirts and a word of advice: go in and get messy.

As the battle commenced, students threw paint-soaked sponges at each other, while trying to avoid the splatters themselves.

“My goal was to come out unscathed,” freshman Spanish major Cayla Cowens said, drenched in paint. “You wouldn’t think throwing paint would require a whole lot of strategy.”

As blasts of color were launched through the air, a collection of paint-splattered patterns were created on the once white t-shirts.

While some students had little paint residue left on them, others were covered from head to toe.

Nalen Wade, a freshman and elementary education major, was eager for the paint war to roll around. He said that the highlight of the war was “pouring the paint all over people.”

Wade suggested that they include more paint next year, so the event can go on for even longer.

Though the event didn’t last long, it proved to be very entertaining for the students who participated. For some students, it was a perfect way to meet new people. For others, it was a golden opportunity to leave their dorms for a while.

Alicia O’Neal, freshman, was seen standing on the sidelines post-paint war, covered in splats of blue and purple.

As a student from outside of the area, O’Neal was happy to see that there was an opportunity for her to make new friends.

For some students, however, the real fun came after the “war” had already ended. As students discussed the aftermath of the event and regrouped, pizza and popsicles were served to all of the participants while music blasted in the background.

“I just went in and had a good time!” freshman Johnathan Appleby said.