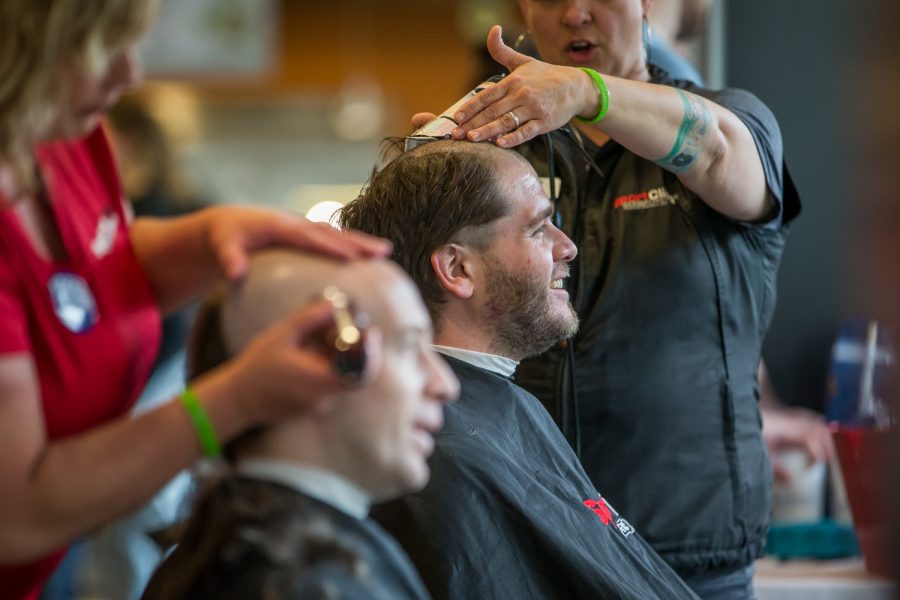 Students shave their heads to contribute to the St. Baldrick’s foundation.

Students shaved their heads as part of the annual spring philanthropy event for the St. Baldrick’s Foundation put on by Sigma Phi Epsilon fraternity in the Student Union on Friday.

St. Baldrick’s Foundation is a nonprofit organization that, according to its website, works “closely with leading pediatric oncologists” to “determine the most promising research to fund and create funding priorities to make the greatest impact for children with cancer.”

The event encourages participants to shave their heads in order to raise money for the organization and stand in solidarity for what many childhood cancer patients encounter as a result of their diagnosis.

Brothers of Sigma Phi Epsilon fraternity who participated created individual fundraiser pages through St. Baldrick’s website prior to the event, where they accepted donations to benefit St. Baldrick’s research efforts. Brothers were encouraged to share their pages on social media platforms such as Facebook and Twitter.

Anyone outside of the fraternity who wished to shave their head had to create a fundraiser page as well and needed to meet the monetary goal they set for themselves.

Matthew Wood, vice president of programming of Sigma Phi Epsilon, is the head director for planning the event. He said “brothers will set a specific goal for like, $100 for example. If they reach $100 or over then they’ll shave their heads.”

Jordan Murphy is a member of Sigma Phi Epsilon fraternity and shaved his head for the event last spring.

“You’re like ‘oh my gosh, I’m about to shave my head’ and so you sit in the chair and you’re looking at everyone in front of you and they turn on the shavers and you just hear them and go,” Murphy said.

“From that point on you just accept it.”

Murphy said that his decision to participate was very last minute, though he quickly reached his fundraising goal of $250.

“My money went like that,” he said with a snap.

Wood said the goal for the event is to raise $10,000 toward childhood cancer research.

For a dollar, students were able to throw water balloons at a Sig Ep member.

During the head shaving on Friday, donations were be accepted on site, and there was a table set up with themed raffle baskets including a self-care collection, a “Finals Survival Kit” and Avengers. Attendees were able to purchase tickets for a chance to win each of the baskets. Tickets ended up being priced at $1 each, $3 for five, or $5 for 8.

The event is not only a special time for the fraternity—it’s held every year and attracts students, staff and faculty alike.

According to Wood, childhood cancer research is majorly underfunded. He believes that is why so many community members get involved. They feel that they are supporting something that matters.

On his experience, Murphy said, “In the end, honestly, it wasn’t that bad. I really enjoyed it. I loved doing it. I would do it again this year but my goal was higher and it wasn’t met. I loved doing it and I encourage all my brothers and anyone in the community to do it.”