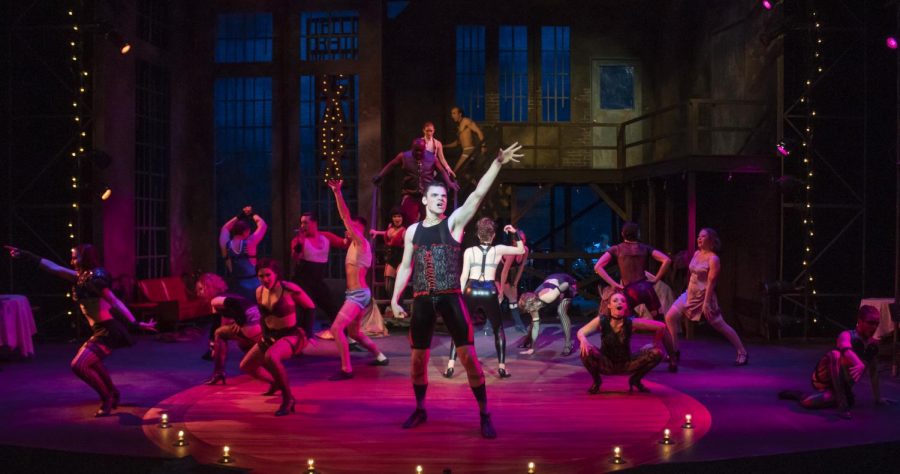 To an outsider, watching students dance across a stage in their underwear may seem odd. Fishnet tights, sparkly bras and high heels demand attention. But the costume pieces are only a glimpse into the exciting world of “Cabaret.”

“Cabaret “ first hit the stage in 1966. Based on the 1951 play “I Am a Camera,” which was adapted from a novel called “Goodbye to Berlin,” this musical showcases the struggles of a group of performers in an unstable political environment in pre-war Berlin.

“I would say it’s certainly a show about acceptance, sexuality and individuality,” Director Brian Robertson said.

While the musical has been performed by numerous theatre troupes and in numerous ways over the past 50 years, Robertson, with the help of scene designer Lindsey Purvis, has added his own touch to the show that can’t be seen elsewhere.

“We’re pretending the Kit Kat Klub where the Cabaret takes place was put into an abandoned warehouse,” Robertson said.

Along with a unique set, the audience can also expect to see the characters tell their stories differently.

Due to the demands of the show, the cast is primarily made up of musical theatre and dance majors. However, students from across campus are always welcome to audition or help out.

Seniors Natalie Bellamy and DJ Bruegee were asked by the head of the dance department, Tracey Bonner, if they would want to work on choreography for the show. Although it’s the 11th show that Bellamy has worked on at NKU, Cabaret is the first show she’s choreographed.

“This is my senior project,” Bellamy said. “It’s kind of like putting everything together that I’ve learned while I’ve been here in a really cool way.”

Bruegee said that while it’s been fun, it’s been “really stressful but educational beyond means.”

A dance phrase they started out with can still be seen in one of the scenes, “Money.”

Bruegee said that in order to enjoy the show, you need to come with an open mind, or else it could seem “risque.”

“Come to see it to support your local art,” Bruegee said.