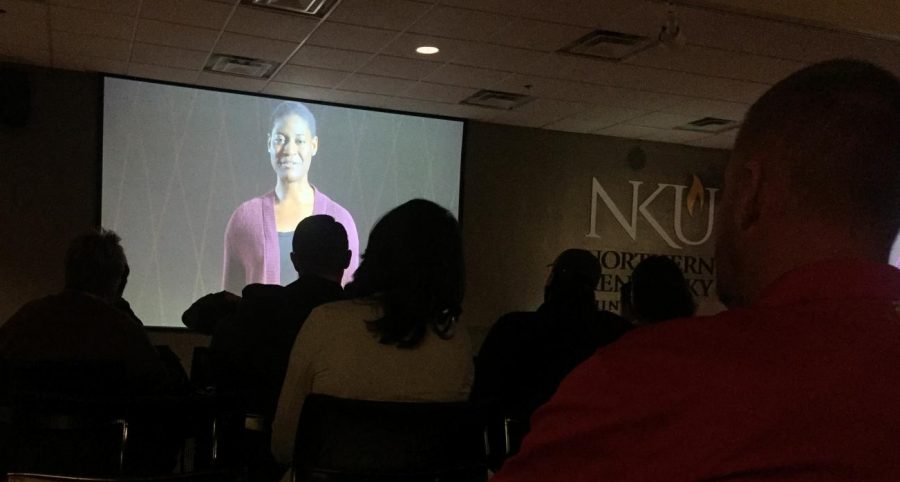 Viewers watch as Kearston Hawkins-Johnson performs “There is no father” by Madison Pullins in the documentary. This poem represents a breaking point for Margaret Garner.

Documentary examines race in America then and now

'Mourning the Creation of Racial Categories' delves deep into tragedy

A slave mother raises three children born from her slave master. She tries to escape from Northern Kentucky across the Ohio River. After being caught by U.S. Marshals, she kills her children, for she knows death is the only thing better than going back into a world where they must endure racial categories.

How would one display this tragedy through poetry? What about dance? Music composition? Sculptures?

Dr. Joan Ferrante, sociology professor at NKU, examines this in her documentary “Let Our Loss Be Heard,” the second part in a series titled “Mourning the Creation of Racial Categories,” to a nearly full audience in the University Center Ballroom at a special screening Oct. 27.

The documentary was 75 minutes long, with flashes from sociologists, historians, students and personal testimonials telling the story of Margaret Garner, her family and their journey from Covington, Kentucky to Cincinnati for freedom.

The story first opens with questions about the murals and other paintings of the family, showcasing all members as darker-skinned slaves. However, the family was far from the one shade.

According to the documentary, Margaret Garner was raped at least three times by her slave master, Archibald Gaines. As a result, three of her four children, Samuel, Mary and Priscilla, were “mulatto” children. The term was used to describe children born unto a black parent and a white parent or two mulatto parents.

As the story unfolds, we see the Garners flee from Covington to Cincinnati to freedom, walking across the frozen Ohio River as they attempt to get to safety—but they were discovered by U.S. Marshals. Upon being found, she cut the throat of Mary Garner and wounded the other children, believing that death would be better than returning to slavery.

Dance: ‘getting the emotions’

La Shanda Suggs, a sociologist interviewed in the documentary, said of the opening scene, “Without race we acknowledge that family is complex.”

The dance focuses on the relationships of Margaret, her husband Robert and their child Samuel. Archibald Gaines and Mary, the 2-year-old child he had with Margaret, are also depicted in the dance.

You see Margaret and Robert hugging in the center of the stage with Mary and Samuel running in a circle around the couple until they meet in the middle to join their parents. The peace is then broken when Gaines forcibly removes Margaret from the hug.

They then all begin walking throughout the stage to show how intertwined and complex their relationship truly is.

Moving through the piece, you enter the mind of Margaret, portrayed by Lavette Patterson, and the anxiety that she feels. The next scene examines the relationship between Mary, played by Hannah Duvall, and Robert, played by Marcellus Howie.

The two, being distanced from each other on the stage, reveal the categories they both are put in by society. The two never touch, yet they match their breaths and movements, as if to show a relationship in a way that is personal to them alone.

Shortly after, Mary begins to stare at her skin tone, recognizing she isn’t the same shade as Robert. Following that, we hear Jason Vest, Associate Professor of Voice, begin singing, “Were you there when she pierced the baby’s neck?” as Margaret pierces Mary’s neck.

As Mary lay on the ground, both Gaines and Robert come to her side, though neither touch her. They both still are victims of the racial categories that society places upon them, permanently separating them from their daughter.

Similar to Mary, the world around us continues to be shaped by these racial categories.

India Hackle writes in a poem titled, “I love you with all my heart” about a relationship based from a lighter skinned father and his dark-skinned daughter. The father is loving and accepting until the daughter spills her milk on the brown table.

Quoting her father, “‘this white milk doesn’t belong on my table,’” Kearston Hawkins-Johnson reads. “‘And those black knees don’t belong on my baby girl. And began wiping the black off my knees.’”

Sugg wants people to acknowledge that categories, like black and white, come from trauma.

“Yes, we have differences in our hair texture…” Sugg said. “The government made those insignificant details matter.”

These differences enter family homes upon the birth of a family.

Nicole Schrek, a participant in the documentary, said that the birth of her first child was traumatic for her. Schrek, who is 50 percent black and 50 percent white, recognized that with her husband being 100 percent white, her children would be born “looking more white.” So when they received the birth certificate, she checked the box for “white.”

“The trauma for me was— I gave up my category for that day,” Schrek said.

Greg and Tina Phelia said that’s also something they experience raising their kids. Greg, who is 100 percent black, and his wife Tina, who is of Filipino and European descent, said they tell their boys that they are all of the above, but “in the eyes of the world, you’re a black man.”

The documentary closes with the phrase asking for a call to action: “It is not enough to challenge the old narrative. We must show a new narrative from who we are.”