Rachael Denhollander takes back the night

Denhollander, an advocate for victims of sexual abuse and a Time 100 honoree, was the first woman to publicly accuse Michigan State doctor Larry Nassar. She came to campus on Tuesday to share her story. 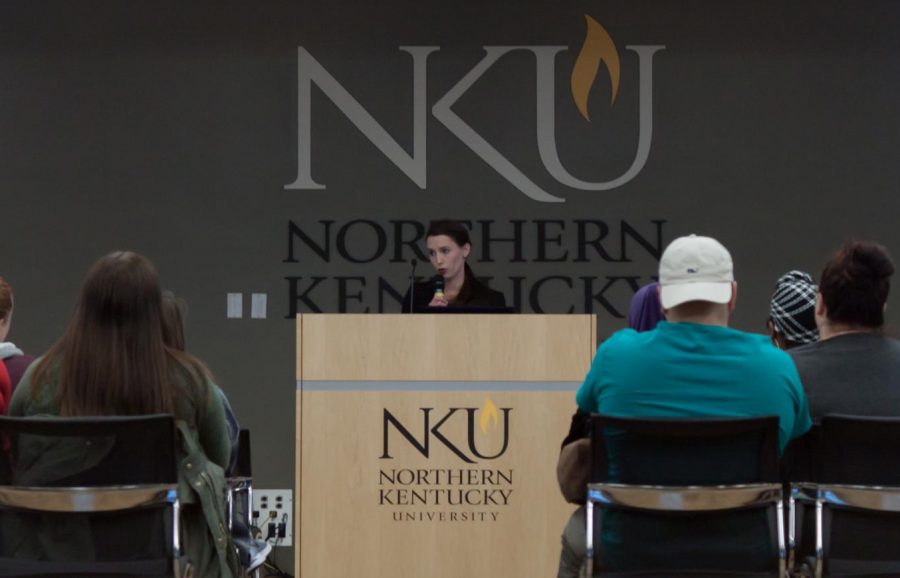 Denhollander visited campus Tuesday to speak as part of Take Back the Night.

“The most powerful thing you can do with your voice is speak the truth to a society that often does not want to hear it,” Rachael Denhollander said to over 75 students in the University Center ballroom last Tuesday.

She spoke as part of the sixth annual Take Back the night, an event within NKU’s Sexual Assault Awareness Month.

Denhollander, the first of over 250 women to publicly step forward and accuse former Michigan State University doctor Larry Nassar of sexual abuse, shared her story as a survivor of sexual assault.

Nassar was convicted in January for several counts of sexual assault of minors, and will serve a minimum of 100 years in prison.

As she told her story of childhood abuse, several audience members became emotional.

“One of the biggest lies of abuse is ‘If you cannot prove your abuse, do not speak up against it, because you will lose everything.’ Believing this lie allowed the abuse to continue for much longer,” Denhollander said. “Next, I thought if I had not been so naïve, so trusting, if I had just spoken up that I could’ve stopped my own abuse.”

She went on to say that she told herself that it was her fault, her guilt and her shame. When she couldn’t get over her own abuse, she said she blamed herself for that, too. Later, Denhollander talked about society’s role in abuse.

“There’s always a reason why an abuser couldn’t be an abuser. People say, ‘How could this be possible, because…? They’re so respected!’ Doing this keeps abusers in power, and that is exactly what they want,” Denhollander said.

“I always thought that it was my problem. That I was overthinking it or over-sexualizing it. Larry [Nassar] was so respected, he couldn’t be an abuser! So I continued to place blame on the victim: myself.”

Out of every 1000 rapes, 310 are reported to the police. 57 of those police reports lead to an arrest. 11 of those cases go to trial. Seven of those cases will lead to a felony conviction for the perpetrator. Only six of the rapists will be put in jail.

In college, 1 in 5 women and 1 in 16 men experience sexual assault. The Norse Violence Prevention Center aims to promote advocacy and raise awareness of sexual assault and intimate partner violence.

“As soon as we received funding from the Department of Justice to create the [violence prevention center], immediately we had victims come forward to seek services at the center. So immediately we knew that it was important,” Macke said. “We didn’t have any prevention services on campus prior to the center’s existence. Now we’re able to train a couple thousand students every year to be aware of this issue and to learn about consent and healthy boundaries and relationships.”

Gabby Dralle, director of the Norse Violence Prevention Center, points to the #MeToo movement as an important moment in the fight against abuse on campus.

“We’ve seen more students coming in than we have since we’ve opened,” Dralle said. “More students this year than ever. And I think that has a lot to do with the #MeToo movement.”

More students know about the center and the services they offer, she said. Because of movements like #MeToo and the work that NVP does, she feels like more people feel safer coming forward.

Dralle also stated that this year, the Violence Prevention Center has created resources online for faculty and staff as well – not just students – as a way to help the battle against power-based personal violence at NKU.

“There are resources for staff that go through their responsibilities as a staff member, how they can support survivors, who they can contact… we’re also doing a lot more training,” Dralle said. “We really plan to focus on reaching faculty and staff and ensuring that they’re aware of school policies and what they can do.”

Denhollander gave powerful words of advice in her keynote speech to attendees.

“It is imperative that we embrace our voice and speak truth to the lies,” Denhollander said. “To sexual abuse survivors: You are not crazy. You are not being overdramatic. You are not alone.”