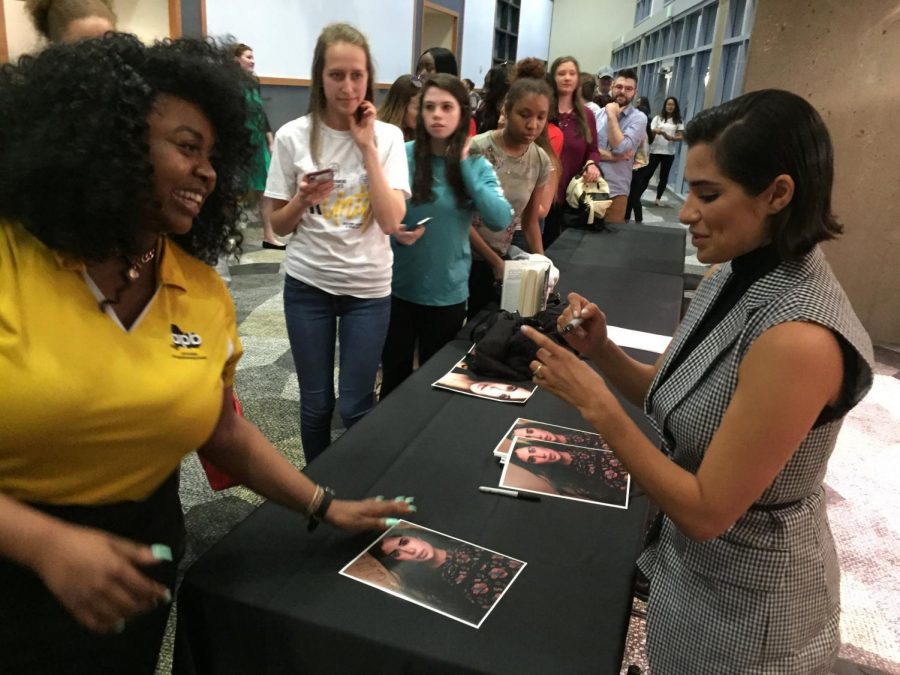 Diane Guerrero—known for her roles as inmate Maritza Ramos on the Netflix series Orange Is the New Black and Lina on Jane the Virgin—spoke at Northern Kentucky University about her recent memoir, In the Country We Love: My Family Divided, which shares her personal story in hopes of raising awareness on immigration issues and making change in the country.

It was planned through Activities Programming Board (APB), who organizes a major event each year.  On April 12, the event featured the well-known actress, author and immigration reform activist in the format of a one-hour moderated discussion.

Around 200 students came to Student Union Ballroom to listen to Guerrero’s story. NKU associate professor Brandelyn Tosolt guided the discussion by asking Guerrero pre-selected questions that students submitted before the event. Most of the discussion centered around In the Country We Love: My Family Divided, which presents her personal story of the real plight of undocumented immigrants in the United States.

Guerrero was born in U.S. in 1986 in Passaic, NJ and raised in Boston, MA. Her parents and older half-brother came from Colombia. After unsuccessfully pursuing legal US citizenship, Guerrero’s family was deported from the country when she was 14 years old.

According to Guerrero, one of the biggest struggles that immigrants face now in the United States is surviving under the current Trump administration. She said that the administration pursues its own agenda, while using immigrant community as a scapegoat.

“They’re doing it by criminalizing the immigration population; they’re doing it by dehumanizing, using words like ‘illegal’. We know that a person cannot be illegal. Using violent words, calling the immigrant community violent, calling them murderers and rapists, saying that they’re stealing jobs, when we simply know that it’s not true,” Guerrero said. “Now, there is a need for an immigration reform, there is a need for an updated visa system because I do believe in securing our borders and I believe there should be a balance.”

Growing up in a poor family, Guerrero struggled  to get an accessible education. She had to break through life’s challenges on her own. She said that being in college is already a major accomplishment, and she wants to share with students what she has done to become successful despite challenging situations.

“The way that I have achieved personal success has been by giving myself the opportunity, self-care (therapy) making sure that my mental health is right, and it’s also been to be up service. That has completely changed my life,” Guerrero said. “It has made me freer, it has made me live in my truth, and it has also put me in positions in front of people, in front of the community that I want to be a part of. All you have to do is reach out and do your research; there’s tons of people who you can join in this fight.”

One of the main messages that Guerrero explained during her visit to NKU is that, as a nation, people have to participate and fulfill their civic duty in order to change the current situation.

“I’m not a politician, but I’m here to tell students that we can do something to participate in order to have people in office that are representing our needs and our values—and it’s not going to happen if we, as a nation, don’t participate,” Guerrero said. “It’s our civic duty to vote, it’s our civic duty to make sure that we have a community that is empathetic, that is understanding of the needs of certain students that don’t have the privilege of being a citizen.”

She added that one thing she said individuals can do is educate themselves by paying attention to what is going on in the communities and world.

“What we have to do is to remain vigilant and understand that we have a civic duty to participate and to vote,” Guerrero said. “And those who cannot vote can use this opportunity to remind people to vote. And you do that by sharing your story, by advocating for yourself, for your community and your family.”

At the end of the event, Guerrero answered a few direct questions from the audience. Soon after, she talked to each attendee personally, giving out autographs and taking pictures.

APB Coordinator Leah Koch, who helped to organize NKU meeting with Guerrero, said that the main goal of the event was to educate students and bring more awareness to the immigration situation in the country.

“Educating them (students) on immigration policy and how it affects people, what it means, and how it’s very relevant to many of our students that go here,” Koch said. “It’s teaching them to look outside their own scopes and realize what affects other people.”

Elijah Cane, a sophomore English major, was happy to get a picture with Guerrero afterward and receive her autograph. He said he follows Guerrero on Instagram and watched her act in Orange is the New Black, adding that this event was a good platform to raise an immigration issue.

“In this country right now, there is a lack of empathy and she talked about it in there,” Cane said. “How we need to just understand where we’re all coming from. This issue is not to be taken lightly, this issue affects a lot of people, this issue needs to be dealt with. Kindness is really the biggest overall factor. We need to be kinder to each other.”

Freshman chemical engineering student Jordan Heller follows Guerrero on Twitter and watched two of her TV-shows. Heller was surprised to learn that Guerrero is a very down-to-earth person and has struggles like everyone else. . She said that in order to change the immigration situation we need to vote.

“Put your ideas out there. Have a vote,” Heller said. “I know a lot of people our age don’t really vote for our representatives and that’s a big problem. It’s the older people voting and there are older ideas in our representatives. We need to bring in those new ideas of equality, ideas of free form and the way we can do that is with our vote.”

Stacy Woodbridge, a junior marketing major and an international student from Trinidad and Tobago, came to the event with eight friends from different countries. She said that she enjoyed Guerrero’s strong message and wished that NKU would bring more people with stories worth sharing.

“We should have more speakers like that come to NKU. Not necessarily famous but those people who have gone through a hard life and who are opened to speak about it, who have written books about it,” Woodbridge said. “They should speak to students and let them realize that everything in life is not going to be easy, and that’s Okay.”

Though junior CIT major Ismail Sidiya had never heard of Guerrero before the event, he was impressed that, despite major struggles and parents’ deportation, Guerrero found a way to be successful and become a famous actress. He said that these kinds of events bring more awareness to students at NKU.

“It’s good to have a celebrity talking about issues that many people have,” Sidiya said. “I want to thank NKU to have an event like that; it was a pleasure to come and I’m hoping for many similar events in the future.”