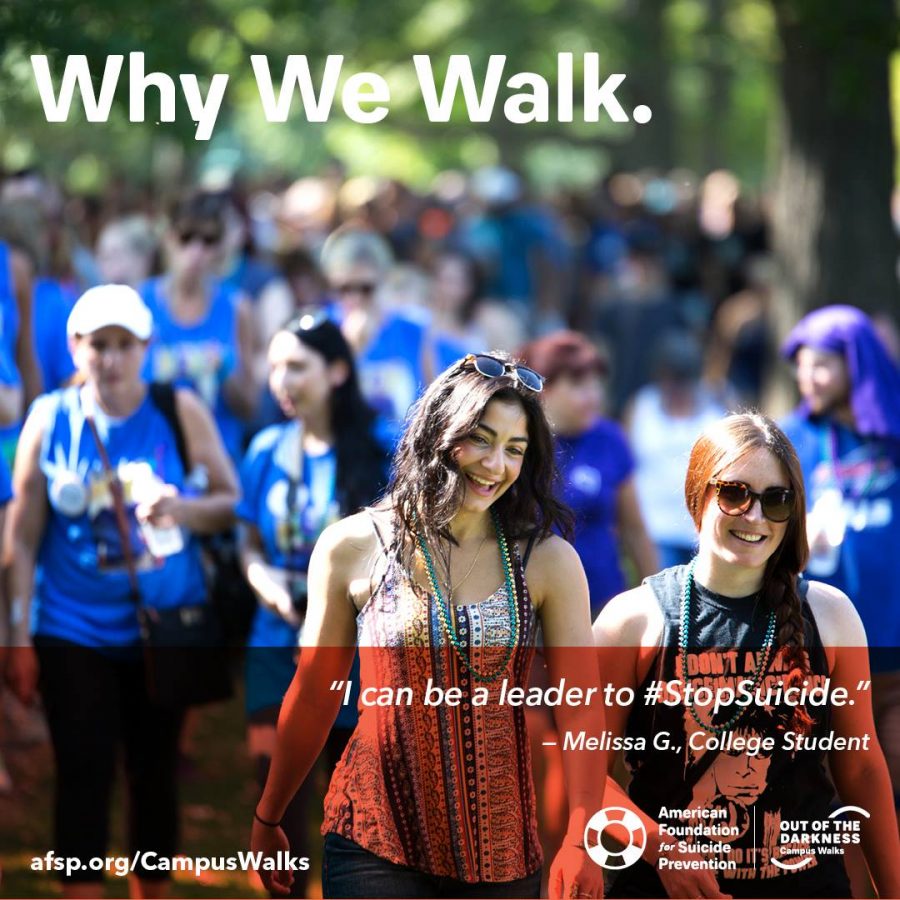 According to Suicide Awareness Voices of Education (SAVE), suicide is the 10th leading cause of death in America for all ages. Over 38,000 Americans die from suicide each year, which equates to one every 12 minutes. Twenty to 25 percent of Americans ages 18 and older are affected by depression.

University police logs show that over the past two years there have been a total of 29 psychological emergency reports at NKU. Twenty-three were reported in 2016, two of which were suicide attempts.

A suicide prevention walk, “Out of Darkness,” will take place on Sunday, April 8 at 12 p.m. on NKU’s campus. You can register to participate online or at 11 a.m., the day of the walk.

“This is not just a walk, this is a walk to bring us together,” said Austin Aardema, an organizer of the event. “There are so many people hurting on our campus and I’ve met a lot of them.”

Aardema, a social work major and a suicide attempt survivor, said that after years of depression he began to experiment with drugs to numb the emotional pain.

“In high school, I was a little overweight, my parents were divorced and my stepdad was an alcoholic,” Aardema said. “Every time I’d try to talk at home, I was always belittled by him and other people… So I never talked in high school and just stayed by myself. I don’t think I hung out with one single person in high school.”

I don’t want anyone to feel alone or lost like I was.”

Once he started his freshman year of college in 2014, he thought everything would get better.

“It didn’t get better. I still had trouble talking to people, I was still really awkward,” Aardema said.

In the year 2015, he still struggled with depression. “I felt like I had nothing, and then I started doing things I’ve never done before.” Aardema said.

He said his coworkers were frequent drug users, and he began to try it out of curiosity to numb the pain.

His drug use didn’t prove to be a successful coping mechanism. He decided to tell his parents about his experimentation. “Though they freaked out, they were supportive,” Aardema said.

In 2016, after moving on campus, things got a little better—still, he felt alone. He began to harm himself. Within that same year, Aardema attempted suicide.

“I never want to become that person again, I was lost. I finally found something to get me grounded in life and to help other people, I don’t want anyone to feel alone or lost like I was,” Aardema said.

Ultimately, the purpose of the walk is to provide a support system for those who have depression and thoughts of suicide.

Brett Marzano, a sophomore environmental science major said that he supports suicide prevention because he himself has struggled with thoughts.

“A lot of really close friends of mine have attempted suicide,” he said.  “Thankfully they weren’t successful, they bring a lot of joy to my life.”

Alex Navarro-Guzman, a sophomore international business major said that the walk allows them to express their opinions.

”[It] allows us to support those who have faced those difficulties in life,” she said.