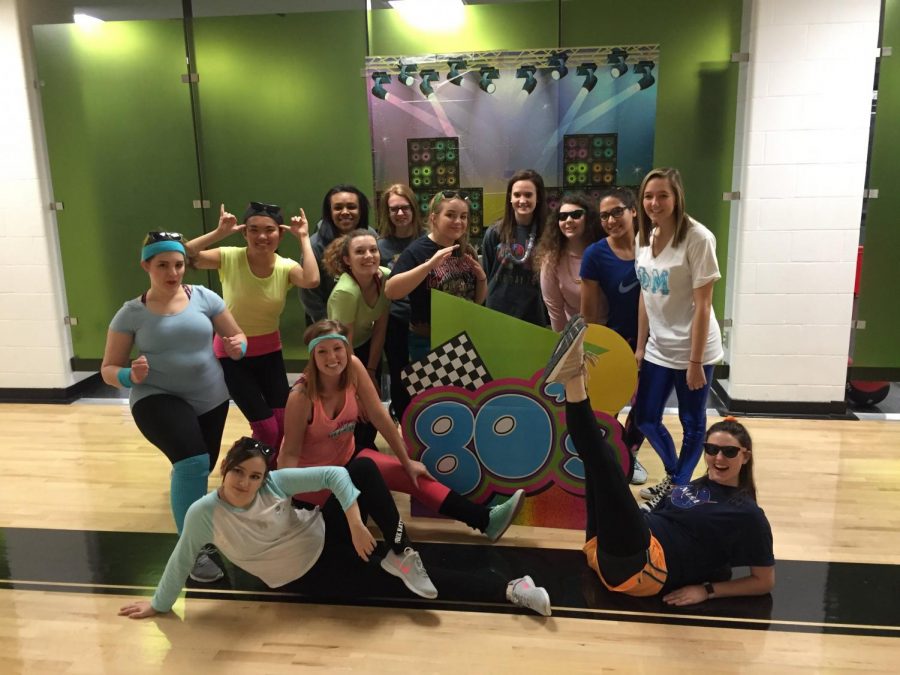 Founded in 1968, Northern Kentucky University is celebrating its 50th anniversary this year. Along with NKU staff, Activities Programming Board (APB) has organized a traditional homecoming week (Feb. 3-Feb. 11) with a lineup of sports and entertainment events for  all students, faculty, and staff members.

Last year’s theme—“Go for the Gold”—reflected the feeling of NKU achieving greatness. Homecoming 2017’s theme was about staying true to oneself.

This year, the Homecoming theme is “Back to the Future: Blast from the Past”, which aims to remind the NKU community to look back at the past and see how far NKU has come as a university.

On Friday, February 2nd, NKU set homecoming in motion with an ‘80s Aerobics session and a Nearly Naked Run that took place in the Rec Center at 6 and 7 p.m. accordingly.

More than 50 students gathered in the Rec Center to dance and welcome the beginning of homecoming on Friday night.

Junior biology major Eric Hutchinson has been teaching Zumba and Aerobics at NKU Rec for the last year. Wearing a red singlet and striped shorts, he served as a dance instructor for the ’80s Aerobics event.

“We estimate to have 50-60 people tonight,” Hutchinson said. “The 80’s workout videos were so funny and we’re trying to emulate that.”

The dancing session lasted for about an hour as two dance instructors led a large group of students through a host of movements.

Samantha Griffith, a senior human resources major,  participated in the Aerobics event, sporting pink leggings and a turquoise sweatband that matched her shoes.

“I love ‘80s music and it’s fun to dress up,” Griffith said. “I think it’s an event to get people involved in a homecoming week and get them excited. People enjoy dressing up and 1980’s is a really cool theme that everyone knows about. It puts you in a different place. “

Jacob Kennedy, freshman and EMB major,  and self-proclaimed fan of ‘80s film and music, said he saw  the event as an opportunity to connect with fellow students.

“This event brings presence. It brings you awareness,” Kennedy said. “To acknowledge that there are other students that you might never see on campus. It’s nice to see people from every different corner of campus come out to these kind of events.”

The Nearly Naked Run, hosted on campus during homecoming, is an annual celebration staple.

According to Tiffany Mayse, director of student engagement, the running tradition dates back to 2011.

Each year, students strip down and don tank tops, gym shorts and bathing suits; the rest of their bodies are covered in neon paint.

On Friday night, students ran one lap on the Rec Center track to celebrate the beginning of a homecoming week, all while  raising money for Fuel NKU, a food pantry located in the University Center for the campus community.

APB Coordinator Leah Koch has been organizing events for NKU students, faculty, and staff since 2011. She hopes that this homecoming week is going to be bigger than ever and will support NKU community.

“The great thing about homecoming this year is that it’s a kick off for 50th anniversary. It’s a big deal!” Koch said. “We try to do some philanthropic events during homecoming week. Nearly Naked Run is an opportunity for students to come together and donate their money. Each runner has to donate $10 and, then, all these proceeds go to Fuel NKU.”

More than 18 campus organizations registered their student members to participate in the run. Students were divided into Black, Gold, and White divisions according to the size of their respective organizations.

Dozens of students came together to watch entertaining competition and support their friends, classmates, fraternity brothers and sorority sisters.

The student crowd cheered loudly to encourage  all runners; the Nearly Naked Run  is warm, emotional and competitive at its core.

Kayla Kelkongsy, a sophomore engineering major, placed third last year. This Friday, she came first and could barely catch her breath while sharing her sentiments.

“It feels really good, I’m out of breath,” Kelkonsgy said smiling. “This event brings us all together. People are cheering for everyone.”

Business management major Madison Tapp, who won a race in White division, said that her victory didn’t really matter; she participated in the run to support the event.

“I was here to support homecoming week and I wanted to promote healthy living,” Tapp said. “This event represents overall well-being and community. Everyone’s coming together and support a common purpose.”

The homecoming week at NKU will host various music, art, and sports events under one theme “Back to the future, blast to the past.”

Students will design windows of SU and Rec Center, watch motivational speaker Judson Liapply, play Trivia in the  SU Ballroom, go to the Glow Party, attend a Talent/Fashion show, cheer on the Norse at several basketball games, construct a time machine out of canned food, and choose the king and the queen of a homecoming week.

All important dates and event information can be found on the NKU website and official NKU Facebook page.