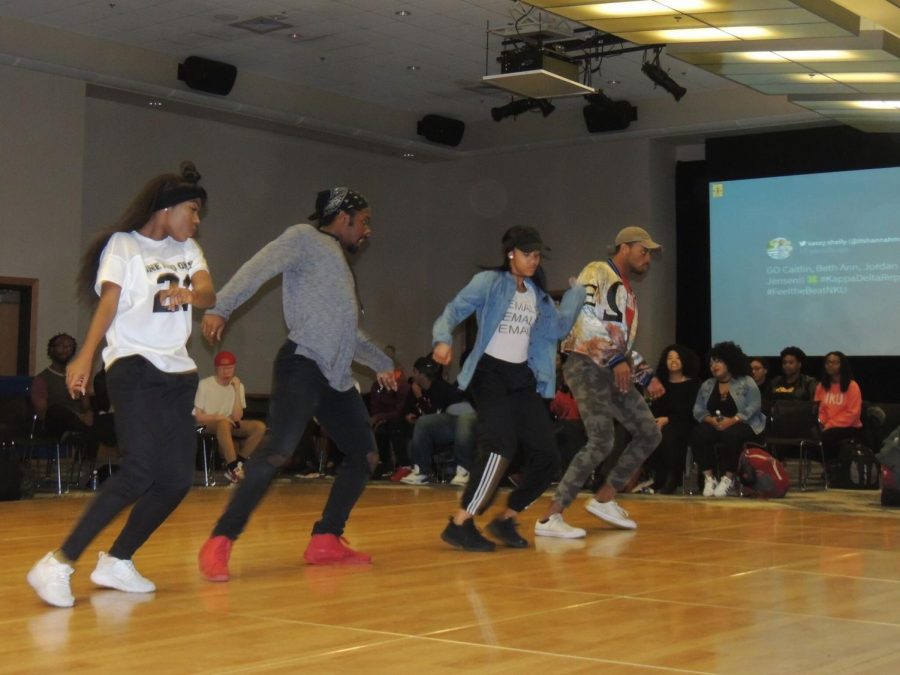 APB encouraged attendees to support the dancers with the #FeeltheBeatNKU tag on Twitter.

Feel the Beat showcases a flurry of dance styles

Activities Programming Board (APB) highlighted different dance styles with the Feel the Beat showcase on Nov. 9.

Ariyana Hardy, director of the Entertainment committee of APB, said the idea came up at the beginning of the semester. However, the execution wasn’t confirmed.

“We wanted to have different styles (but) it wouldn’t be right to have a competition if some styles are more popular than the others,” Hardy said.

The next thought was how to make the event interactive with the audience. The answer was to look at where the students share their thoughts: social media.

Students filled the dance floors as line dance classics like the Cupid Shuffle played in the background before the first acts took the stage.

Rebekah Lee, junior BFA Musical Theatre, said that they learned choreography quickly during rehearsal. Between classes and multiple choreographers, they had a week to prepare before taking the stage.

Lee said that she came to NKU “loving to move” but did not know how to move technically.

“NKU has really helped me build that technique and become a better dancer,” Lee said.

Sophomore Aubrey Warpool was enthusiastic about the dance showcase.

If you didn’t attend, “You are missing an actual dance party,” she said

Since this was the first year there are no plans in line for a continuation, but from the reactions of Hardy, the dancers, and the audience there is hope.

“I’m graduating so I hope they will bring it back, but if we get the attendance we have been getting I’m sure we can get something rolling,” Hardy said.